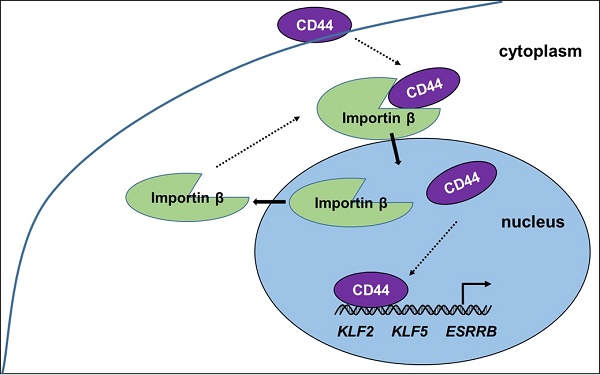 CD44 is one of biomarkers of liver cancer stem cells (CSCs). The investigation of mechanism of CD44 translocation helps to uncover new molecular pathways participated in the regulation of various cellular processes in CSCs. In the present study, we observed the translocation of CD44 from cytoplasm to nuclear in the reprogramming process of C3A cells, full-length CD44 presented in the nucleus of liver iCSCs. CD44 was bound with importin β and transportin 1 in liver iCSCs. Inhibition of importin β transport leads to reduction of CD44 in the nucleus. Translocation of CD44 is also influenced by importin α. Besides, overexpression of naïve pluripotent genes, KLF2, KLF5, DNMT3L, GBX2, ZFP42, ESRRB and DPPA4 were found in liver iCSCs. Inhibition of CD44 leads to the reduction of these naïve genes. Luciferase and chromatin immunoprecipitation (ChIP) assays further identified nuclear CD44 bound to the promoter regions of naïve genes, KLF2, KLF5, and ESRRB functioned as transcriptional activators in liver iCSCs. Our present work provides new insight into the dynamic states and functions of CD44 in iCSCs.

Cancer stem cells (CSCs) characterized as a small subpopulation of heterogeneous cells have the capacity to self-renew and differentiate, which are implicated in tumor progression and distant metastasis [1]. Liver CSCs are responsible for the high rate of recurrence and heterogeneity of tumors [2]. Therefore, therapies targeting liver CSCs hold great promise for improving survival and quality of life of liver cancer patients. There are many biomarkers including CD133, CD44, CD90 and CD24 discovered to identify and isolate liver CSCs [3-5].

The glycoprotein CD44 functions as the principal cell surface receptor for hyaluronan (HA) involved in numerous cellular processes including cell adhesion, cell migration, and epithelial-mesenchymal transitions (EMT) [6-8]. As the receptor of Wnt signaling pathway, CD44 plays a vital role in tumor stem cell niche [9]. CD44 participated in the homing of early leukemia stem cells in acute myelocytic leukemia [10]. CD44 is also identified as a negative biomarker of disturbing the forming of iPSCs during the process of fibroblast reprogramming [11]. In human colon cancer cells, CD44 was responsible for the survival of cells in suspension culture conditions. [12]. There are also some evidences that CD44 is presented in the nucleus upon engagement by HA or other ligands. It has been proved that the intracellular domain of CD44 is translocated to the nucleus following sequential cleavage, where it is believed to be involved in the regulation of gene transcription [13, 14]. In recent years, full-length CD44 has been found presented in the nucleus of gastric cancer and osteosarcoma cells [15, 16].

Proteins shuttled between cytoplasm and nucleus through nuclear pores. To traverse the barrier, proteins larger than 40kD must bind with carrier proteins or transport factors [17]. Most of transport factors belong to β-karyopherin family, known as importin and exportin [18]. Importin has two subunits, importin α and importin β. Cytoplasmic proteins containing a nuclear localization signal (NLS) are usually bound with the carrier importin β, with or without the presence of importin α [19]. Importin β-bound complex then locates to the nuclear pore complex (NPC) and releases in the nucleus following binding of importin β to Ran, a small GTP binding protein. The importin β-Ran complex is exported to the cytoplasm after it dissociates upon converting RanGTP to RanGDP [18].

The investigation of CD44 helps to understand the molecular mechanism underlying liver iCSCs. Former studies of our lab find that CD44 is overexpressed in the nucleus of C3A-iCSCs, shMBD3-iCSCs and C3A-c-Jun-iCSCs [20, 21]. This phenomenon caused our great concern. Because CD44 was found presented in the nucleus when the programming process was completed, we speculate whether entry of CD44 to the nucleus occurred in the programming process. In the present study, we observed CD44 presented at the beginning of reprogramming and translocated into nucleus in reprogramming process, indeed full-length CD44 presented in the nucleus of liver iCSCs. Furthermore, we found that CD44 was bound with importin β and transportin 1. Inhibition of importin β transport leads to CD44 reduction in the nucleus. Translocation of CD44 is also influenced by importin α. Further studies by luciferase and ChIP assays confirmed that nuclear CD44 bound to the promoter regions of naïve genes, KLF2, KLF5, and ESRRB functioned as transcriptional activators in liver iCSCs. These findings are helpful for illustrating the critical role of nuclear CD44 in liver iCSCs.

C3A were seeded at 6×104 cells per well in 24-well plates. C3A were infected with retroviruses vectors TetO-FUW-OSKM, comprising Oct4, Sox2, Klf4, and c-Myc (Addgene), co-transfected with retroviruses of pCMV-Gag-Pol and pCMV-VSVG. Then cells were passaged onto vitronectin-coated dishes in C3A-iCSCs culture medium supplemented with 20ng/mL doxycycline (Sigma) for 25 days. On day 26, cells were detached onto new dishes until the single cell sphere was picked up and passaged.

Cells were harvested with accutase, suspended (2×106 cells / 100μl) in cold PBS, and then fixed in 70% ethanol in PBS at 4 °C for 0.5h. Cells were washed with cold PBS and stained with 0.5ml of propidium iodide (PI) staining buffer (200 mg/ml RNase A, 50 ug/ml PI) at 37°C in the dark. Signals were detected with a FACS Calibur flow cytometer (BD Biosciences).

The firefly and Renilla luciferase activities were measured by Dual-Luciferase Reporter Assay System (Promega) after 72 hrs according to the pGL3 Luciferase Reporter Vector Technical Manual (http://www. promega.com). KLF2, KLF5, and ESRRB promoter regions were amplified with specific primers and the fragments were ligated into pGL3- basic vectors (Promega). The results are showed as the ratio of Renilla to firefly luciferase activities.

The percentage of colocalization in the region of interest (ROI) was qualified; 250-300 cells analyzed per condition. All data are expressed as the mean ± SD from at least three independent experiments. The Student's two-tailed t-test with significance set at p < 0.05 was used to determine statistical significance. Error bars indicate standard deviation.

Generation of C3A-iCSCs induced by OSKM

Initiation of reprogramming starts with activation of exogenous reprogramming genes, commonly OSKM. The maturation stage is considered to be the activation of endogenous expression of pluripotent core circuits, comprising Oct4, Sox2, and Nanog to achieve a state of transgene independence. The stabilization stage accompanied by the silence of exogenous genes and maintenance of endogenous pluripotent genes. [22]. We observed the exogenous expression of OSKM genes increased expression at day 10, decreased expression at day 20 and silenced expression in C3A-iCSCs (Figure 1B). Endogenous pluripotent genes showed a gradual increased expression before day 20 and maintained chiefly by SOX2 in C3A-iCSCs (Figure 1C). The expressions of pluripotent markers OCT4, SOX2, and TRA-1-80 were analyzed by immunofluorescence. OCT4 had an abundant expression dispersed in the cytoplasm and nucleus. OCT4 acted as one of core biomarkers to mark stemness [23]. Ectopic expression of OCT4 can be related to malignance and diagnosis in the neoplasm [24, 25]. SOX2 exhibited a strong positive expression in the nucleus. TRA-1-80 displayed cell membrane localization (Figure 1D). These evidences demonstrated that C3A-iCSCs possessed pluripotent capacity. H9 cells were performed as the positive control.

We further studied the relationship between CD44 and importin β. Because the nuclear translocation mediated by importin β required the guide of NLS, the CD44 NLS knockout plasmid with the flag tag (CD44-NLS-del) and the CD44 wild type plasmid with the flag tag (CD44-WT) were constructed and transduced into C3A-iCSCs respectively (Figure 3B). Results indicated that CD44-WT was presented in the nucleus, while CD44-NLS-del was blocked outside the nucleus, suggesting that the NLS domain of CD44 is essential for translocation (Figure 3C).

Importazole [26], a special inhibitor of importin β without disrupting the transportin mediated nuclear import, was performed to antagonize the entry of importin β into the nucleus. Immunofluorescence microscopy of C3A-iCSCs using an antibody of CD44 revealed the inhibition of importin β transport leaded to CD44 reduction in the nucleus. Wheat germ agglutinin (WGA), a blocker of nuclear pores [27] was used as positive control (Figure 3D). Similar results were obtained in RNA interfere assay targeting KPNB1 gene (Figure S1D-E). These findings supported the notion that CD44 transport was impaired by blocking importin β transport.

Previously, Lee and colleagues found that triggered by ligation of OPN / H-3, CD44 could acquire more nuclear translocation [29]. Nuclear CD44 of full length integrated with STAT3 and gp130 could bind to the promoter of cyclin D1 as an transcriptional activator to impact the cell proliferation of colon cancer stem cells [30]. In our study, we found naïve pluripotent genes, KLF2, KLF5, DNMT3L, GBX2, ZFP42, ESRRB and DPPA4 were dramatically increased in C3A-iCSCs compared to C3A (Figure 4A). Inhibition of CD44 leads to the reduction of these naïve pluripotent genes (Figure 4B). These genes can be good candidates of CD44 targets. CD44 might participate in naïve genes transcriptional regulation of C3A-iCSCs. To verify this assumption, chromatin immunoprecipitation-quantitative PCR (ChIP-qPCR) assay was performed in C3A cells and C3A-iCSCs. Our results confirmed that nuclear CD44 bound to promoter regions of KLF2, KLF5, and ESRRB of C3A-iCSCs (Figure 4C). 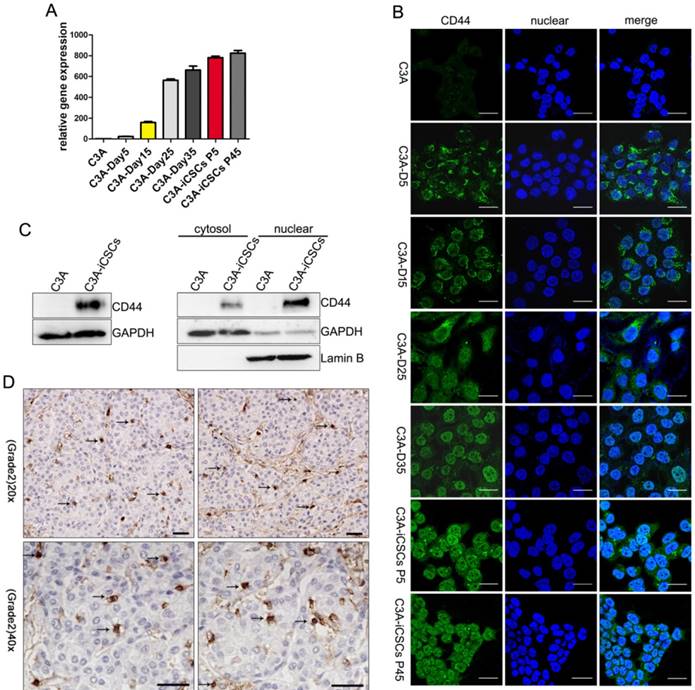 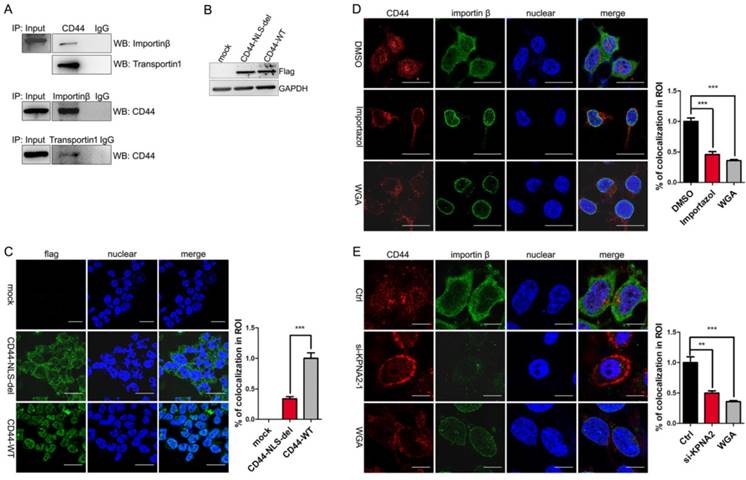 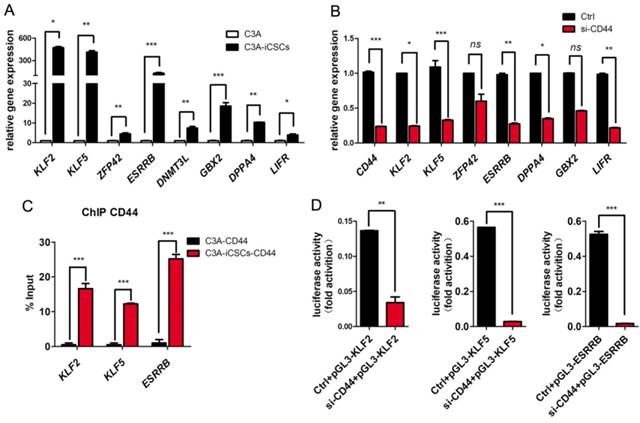 In this study, we elucidated the mechanism upon CD44 transport to the nucleus and the critical role of nuclear CD44 in transcriptional regulation to naïve genes in liver iCSCs. We observed the translocation of CD44 from cytoplasm to nuclear in the reprogramming process of C3A cells, full-length CD44 presented in the nucleus of liver iCSCs. CD44 is bound with importin β and transportin 1. Inhibition of importin β transport leads to CD44 reduction in the nucleus. Translocation of CD44 is also influenced by importin α. Nuclear CD44 binds to the promoter regions of naïve genes, KLF2, KLF5, and ESRRB functions as a transcriptional activator in liver iCSCs. 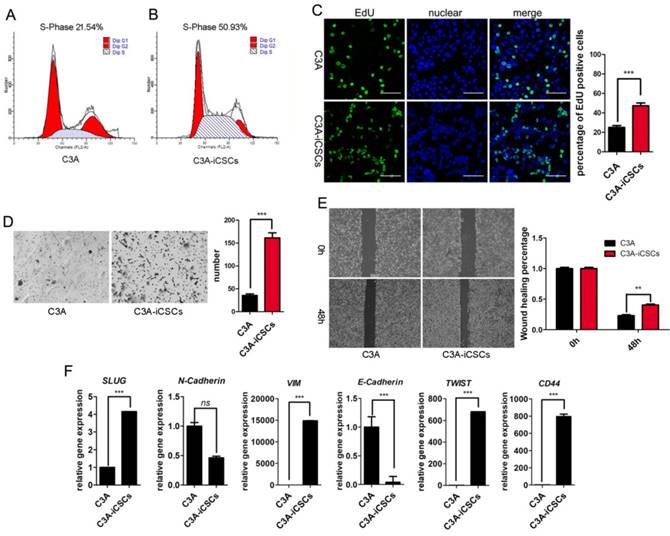 Proposed model of CD44 transport from cytoplasm to nuclear. CD44 transport was mediated by importin β. Nuclear CD44 participated in transcriptional regulation of KLF2, KLF5, and ESRRB genes in C3A-iCSCs. 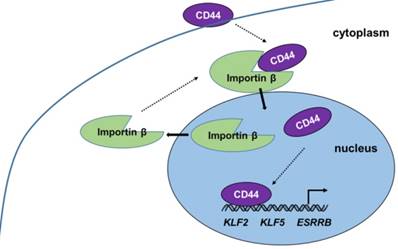 As it is informed that CD44 is one of markers of EMT associated with cancer invasion and metastasis [33]. Cells need to undergo an early EMT state to start reprogramming [34]. Nuclear CD44 was responsible for the survival of suspended sphere state of colon CSCs. In our study, we observed the suspension spheres of C3A-iCSCs when CD44 presented in the nucleus totally. This transition might be related to the function of CD44. Nevertheless, the specific mechanism remains to be elucidated.

Our present work provides new insight into the progress and function of CD44 in iCSCs. CD44 is shown to be transported from the cytoplasm to the nucleus by importin β, where it induces naïve genes transcription in liver iCSCs. (Figure 6) The investigation of mechanism of CD44 translocation can help uncover new molecular pathways thus it participates in the regulation of various cellular processes in CSCs.

This project was supported by the National Natural Science Foundation of China (81572313) and Science and Technology Planning Project of Guangdong Province, China (2015B020229002).