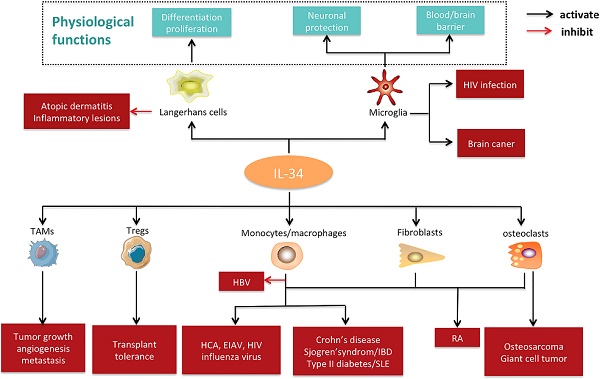 Interleukin (IL)-34 is a cytokine discovered a few years ago and identified as the second colony-stimulating factor (CSF)-1 receptor (CSF-1R) ligand. Although CSF-1 and IL-34 share the same receptor through which they trigger similar effects, IL-34 also binds to receptors protein-tyrosine phosphatase (PTP)-ζ and syndecan-1. Thus, IL-34 is involved in several signaling pathways and participates in a wide array of biological actions. This review analyzes current studies on the role of IL-34 under physiological and pathological conditions, and explores its potential significance as a disease biomarker and therapeutic target. In physiological conditions, IL-34 expression is restricted to the microglia and Langerhans cells, with a fundamental role in cellular differentiation, adhesion and migration, proliferation, metabolism, and survival. It is released in response to inflammatory stimuli, such as pathogen-associated molecular patterns or pro-inflammatory cytokines, with effects over various immune cells, including monocytes, macrophages, and regulatory T cells that shape the immune microenvironment. Over the past decade, accumulating evidence has suggested a potent immune regulation of IL-34 in pathological states such as autoimmune diseases, cancer, transplant rejection, neurologic diseases, infections, and inflammatory diseases. Importantly, IL-34 may hold great promise for acting as a biomarker for monitoring disease severity and progression, and may serve as a new therapeutic target for the treatment of several diseases in clinical settings.