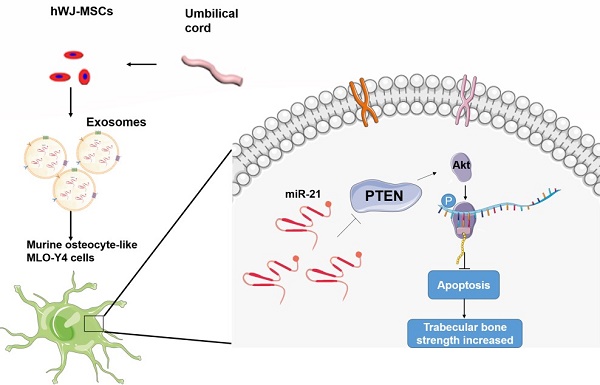 Purpose: Glucocorticoid-induced osteonecrosis of the femoral head (GIONFH) is a common disease after long-term or high-dose glucocorticoid use. The pathogenesis of GIONFH is still controversial, and abnormal bone metabolism caused by glucocorticoids may be one of the important factors. Exosomes, owing to their positive effect on bone repair, show promising therapeutic effects on bone-related diseases. In this study, we hypothesised that exosomes reduce osteocyte apoptosis in rat GIONFH via the miR-21-PTEN-AKT signalling pathway.

Methods: To evaluate the effects of exosomes in GIONFH, a dexamethasone-treated or exosome-treated in vitro cell model and a methylprednisolone-treated in vivo rat model were set up. In vitro, a CCK-8 assay and 5-ethynyl-2′-deoxyuridine staining were performed to evaluate the proliferation of osteocytes. Further, a terminal deoxynucleotidyl transferase dUTP nick end labelling (TUNEL) assay, annexin V-fluorescein isothiocyanate-propidium iodide staining, and western blotting were conducted to evaluate the apoptosis of osteocytes. In vivo, we used micro-computed tomography and histological and immunohistochemical analyses to assess the effects of exosomes. Moreover, the mechanism of exosome action on osteocyte apoptosis through the miR-21-PTEN-AKT pathway was investigated by high-throughput RNA sequencing, fluorescence in situ hybridisation, luciferase reporter assays, and western blotting.

Results: High-throughput RNA sequencing results showed that the AKT signalling pathway was up-regulated in the exosome group. Quantitative PCR and western blotting confirmed that the relative expression of genes in the AKT pathway was up-regulated. Western blotting revealed that AKT activated by exosomes inhibited osteocyte apoptosis. RNA fluorescence in situ hybridisation and luciferase reporter assays were performed to confirm the interaction between miR-21 and PTEN. According to the experiment in vivo, exosomes prevented GIONFH in a rat model as evidenced by micro-computed tomography scanning and histological and immunohistochemical analyses.

Conclusions: Exosomes are effective at inhibiting osteocyte apoptosis (in MLO-Y4 cells) and at preventing rat GIONFH. These beneficial effects are mediated by the miR-21-PTEN-AKT signalling pathway.