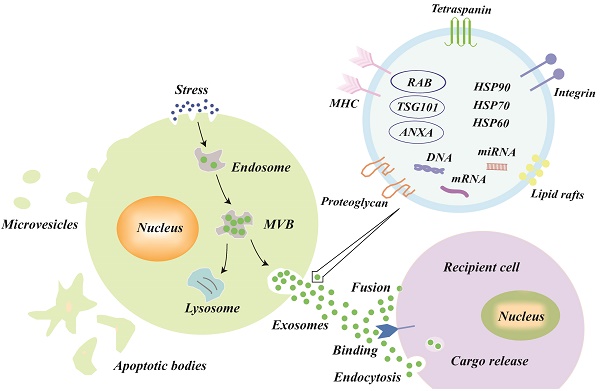 Exosomes, the nanosized vesicles released from various cell types, contain many bioactive molecules, such as proteins, lipids, and nucleic acids, which can participate in intercellular communication in a paracrine manner or an endocrine manner, in order to maintain the homeostasis and respond to stress adaptively. Currently, exosomes have already been utilized as diagnostic biomarkers and therapeutic tools in cancer clinical trials. There has also been great progress in cell and animal exosomes studies of coronary artery disease (CAD). Emerging evidence suggests that exosomes released from endothelial cells, smooth muscle cells, adipose cells, platelets, cardiomyocytes, and stem cells have been reported to play crucial roles in the development and progression of CAD. Moreover, it has been showed that exosomes released from different cell types exhibit diverse biological functions, either detrimental or protective, depending on the cell state and the microenvironment. However, the systematic knowledge of exosomes in CAD at the patient level has not been well established, which are far away from clinical application. This review summarizes the basic information about exosomes and provides an update of the recent findings on exosome-mediated intercellular communication in the development and progression of CAD, which could be helpful for understanding the pathophysiology of CAD and promoting the further potential clinical translation.

Coronary artery disease (CAD) is a common condition that strongly correlates with increased cardiovascular morbidity and mortality, and it poses a high economic burden to the national healthcare system [1,2]. An overall better understanding of the mechanisms of atherosclerosis, the development of antiplatelet and statin therapies, and advances in devices and procedural techniques for coronary intervention have contributed to a great improvement in the clinical prognosis of patients [3]. Despite this, patients with coronary disease still face the residual risks of stent restenosis, cardiac remodeling, and ischemia/reperfusion injury. Thus, further exploration of the pathophysiology of CAD is important, and a novel, reliable tool for these patients will be of great interest.

Extracellular vesicles, membrane-bound organelles and released by diverse cell types, contain many bioactive molecules, such as proteins, lipids, and nucleic acids; these vesicles are varied in size, biogenesis and contents, which usually include apoptotic bodies, microvesicles (also called ectosomes, microparticles, or matrix vesicles), and exosomes [4,5]. The similarities and differences of these three vesicles are summarized in Table 1. In brief, apoptotic bodies are large vesicles (more than 1 µm in diameter) with a permeable membrane that are formed upon cell apoptosis [5,6]. Microvesicles (0.1-1 µm in diameter) are generated by shedding directly from the plasma membrane and undergo the process of cytoskeleton remodeling and the externalization of phosphatidylserine [5,7]. Exosomes are the smallest vesicles (30-150 nm in diameter) of endosomal origin and are released into extracellular space upon the fusion of multivesicular bodies (MVBs) with the plasma membrane, which occurs in an endosomal sorting complex required for transport (ESCRT)-dependent or ESCRT-independent manner [7-9].

In the past decade, emerging evidence in the field of cardiovascular disease [10-16] reported that exosomes play crucial roles in intercellular communication via transferring cargo (including proteins, RNA, DNA, and other molecules) under not only physiological situations (angiogenesis and cardiac growth) but also pathological conditions (ischemia/reperfusion injury, vascular calcification, atherosclerosis, and cardiac remodeling). In this review, we focus on the updated findings in exosomes biogenesis, secretion and uptake, isolation and detection, as well as exosomes-mediated intercellular communication in the development and progression of CAD.

The explicit mechanisms of exosomes biogenesis are quite complicated and only partly understood [17,18]. In brief, early endosomes, which are formed by the inward budding of the cell membrane, can mature into late endosomes [19,20]. Intraluminal vesicles (ILVs), also called exosomes precursors, originate in the lumen of late endosomes by the inward budding of the endosomal membrane [21]. The late endosomes that contain ILVs become MVBs, which have two possible outcomes [22]: either fusing with the plasma membrane to release the ILVs to the extracellular space (called exosomes) or fusing with lysosomes for lysosomal degradation (Figure 1).

Several key molecules have been verified to participate in membrane fusion and the release of exosomes into the extracellular space. Small Rab GTPases were identified to promote exosomes secretion, and Rab27a and Rab27b were involved in MVB docking at the plasma membrane [23]. Hyenne et al [24] also found that RAL-1 (Ras-related GTPase homolog) controlled MVB formation and exosomes secretion. Moreover, soluble N-ethylmaleimide-sensitive factor attachment protein receptors (SNAREs) are important molecules for vesicle fusion [6,25-27]. Recently, Zou et al [28] found that exosomes release, such as autophagy, could be regulated by the mechanistic target of rapamycin complex 1 (mTORC1) in response to changes in amino acids and growth factor conditions, both in cultured cells and in vivo.

Characterization and Classification of Extracellular Vesicles.

Biogenesis, secretion, uptake and the schematic presentation of exosomes. Endosomes are formed by the inward budding of the cell membrane. Multivesicular bodies (MVBs) originate in the lumen of the endosomes by an inward budding of the endosomal membrane, which has two outcomes: either fusing with the plasma membrane to release its intraluminal vesicles to the extracellular space (called exosomes) or fusing with lysosomes for lysosomal degradation. The three types of mechanisms of exosome uptake by recipient cells are fusion, binding, and endocytosis. In general, the exosomes are formed with the following molecules: tetraspanin family (CD9, CD63, and CD81), lipid rafts, integrin, tumor susceptibility gene 101 (TSG101), major histocompatibility complex (MHC) class II molecules, heat shock proteins (HSP60, HSP70, and HSP90), annexins, and nucleic acids. 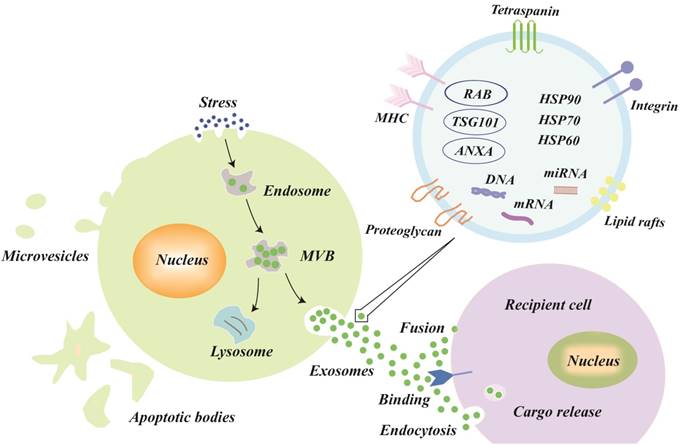 Exosomes could be isolated from body fluids or cell culture media by several different techniques, including differential and gradient density centrifugation, filtration, immunological separation, precipitation, and commercial exosomes isolation kits [18,41,42]. Briefly, centrifugation-based techniques are the most common method to isolate exosomes, and this method is also regarded as the gold standard for exosomes isolation [43], but this method has the following limitations: a large sample volume, time-consuming, and a low exosomes recovery (5%-25%) [44-46]. Filtration-based techniques are currently used to eliminate dead cells and debris, which prepares the sample for further ultracentrifugation [18,47]. Immunological separation has a high specificity because antibody-coated magnetic beads bind to the proteins in the exosomes, but this technique was blamed for a high cost and a low exosome yield [46,48]. The exosome precipitation method is utilized in several commercial exosomes isolation kits and has many advantages, including simplicity, low sample volume, and cost-effectiveness [47,49]. However, the precipitated samples are mixed with contaminants (proteins, lipids, etc.), which are not suitable for direct further detection accurately. Of note, a recent study [50] found that different cell culture conditions and isolation methods could result in varying glycosylated exosomes populations. Overall, the selection of isolation method should be based on the down-stream application and the experiment purpose.

The morphology of exosomes could be detected by a variety of electron microscopy techniques, including transmission electron microscopy (TEM), scanning electron microscopy, cryo-electron microscopy and atomic force microscopy [18]. Western blots and (high resolution) flow cytometry are widely used to identify the specific surface protein markers of exosomes. The size of the exosome is measured by nanoparticle tracking analysis (NTA), tunable resistive pulse sensing, and dynamic light scattering [22,51]. In the current basic research on exosomes, combinations of TEM, western blots (or flow cytometry), and NTA are the most widely used tools to detect exosomes. Moreover, according to minimal experimental requirements for the definition of extracellular vesicles from the International Society for Extracellular Vesicles [22,41], exosomes are defined as vesicles that contain at least one transmembrane protein (CD9, CD63, CD81, adhesion molecules, etc.) and one cytosolic protein (TSG101, annexins, Rabs, etc.), without any endoplasmic reticulum proteins (calnexin and Golgi matrix proteins) or nuclear proteins.

Several key points are quite crucial for the exosome isolation and detection. To exclude the effects of exosomes in fetal bovine serum (FBS), more than 100,000 x g ultracentrifugation of complete medium (or of FBS following at least 1:4 dilution) for at least 18 hours should be performed [41]. Commercial exosomes-depleted FBS is also available from vendors. Additionally, the storage temperature of exosomes is very important. Exosomes storage at -80℃ for three to six months could maintain the basic functions, but current view suggests that original samples are stored at -80℃ and exosomes are isolated just before the index experiments [41,52-54].

The specific mechanism of atherosclerosis is complex, and the mechanism is a chronic process with multifactorial causes. The current view [55-58] is that oxidative stress, endothelial dysfunction, and inflammation are three key factors involved in the development and progression of atherosclerosis. Exosomes participate in cardiovascular cell-to-cell (paracrine) and distant (endocrine) communication via miRNAs and other mediators [59]. Exosomes released from stem cells, endothelial cells, smooth muscle cells, cardiomyocytes, adipose cells, and platelets include potential valuable biological information for the development and progression of CAD (Figure 2) [5]. 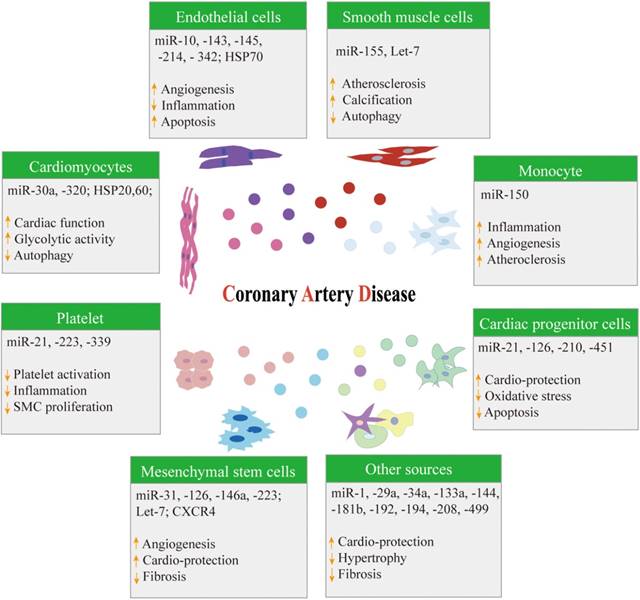 Exosomes released by cardiac progenitors have been shown to prevent ischemic myocardium against acute ischemia/reperfusion injury through miR-451 [60]. Cardiac progenitor cell-derived exosomes could also protect cardiomyocytes against oxidative stress-related apoptosis via exosomal miR-21 by targeting programmed cell death 4 (PDCD4) [61]. Moreover, the exosomal transfer of miR-126 and miR-210 from host cells to transplanted cells could improve the survival of transplanted cardiac progenitor cells into the ischemic myocardium [62].

Exosomes from other sources

Limited studies reported the potential diagnostic implication of exosomes in CAD [12]. A previous clinical study [114] showed that serum exosomes of patients with acute coronary disease (ACS) presented with a high expression of miR-208a compared with that in healthy subjects. More importantly, patients with low miR-208a expression were associated with a significant lower mortality rate than those with high miR-208a expression (3.3% vs. 11.0%, p<0.05) during one-year follow-up. Another study [115] found that the plasma exosomes and exosomal cardiac microRNAs could be increased significantly in patients undergoing coronary artery bypass surgery for up to 48 h after surgery, meanwhile these exosomes and their microRNAs could be positively related to high sensitive cardiac troponin (cardiac biomarker).

In this review, we have discussed exosomes biogenesis, secretion, uptake, isolation and detection, and we have discussed exosomes-mediated intercellular communication in CAD. Exosomes, such as those carrying proteins, lipids, and nucleic acids, could be taken up by the recipient cells in a paracrine or endocrine manner. Exosomes released from different cell types exhibit various biological functions, either detrimental or protective, depending on the cell state and the microenvironment.