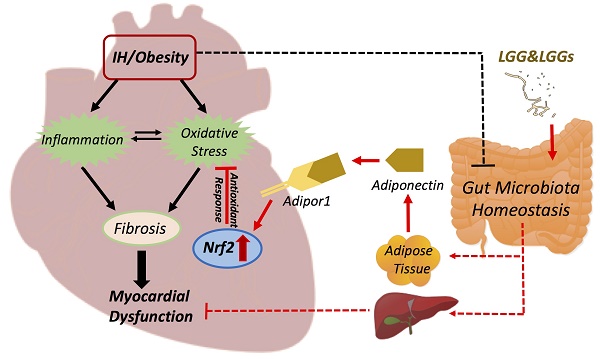 Prolonged intermittent hypoxia (IH) has been shown to impair myocardial function (mainly via oxidative stress and inflammation) and modify gut microbiota in mice. Gut microbiota plays an important role in health and disease, including obesity and cardiovascular disease (CVD). Probiotics refer to live microorganisms that confer health benefits on the host after administration in adequate amounts. Research on novel probiotics related therapies has evoked much attention. In our previous study, both Lactobacillus rhamnosus GG (LGG) and LGG cell-free supernatant (LGGs) were found to protect against alcohol-induced liver injury and steatosis; however, the effects of LGG and LGGs on cardiac tissues of obese mice exposed to IH have not been determined. Here we exposed high-fat high-fructose diet (HFHFD)-induced obese mice to IH, to establish a model of obesity with obstructive sleep apnea (OSA). Mice were divided into four groups: (1) HFHFD for 15 weeks; (2) HFHFD for 15 weeks with IH in the last 12 weeks (HFHFD/IH); (3) and (4) HFHFD/IH plus oral administration of either LGG (109 CFU bacteria/day) or LGGs (dose equivalent to 109 CFU bacteria/day) over the 15 weeks, respectively. Compared to HFHFD mice, HFHFD/IH-mice showed heart dysfunction with significant cardiac remodeling and inflammation; all these pathological and functional alterations were prevented by treatment with both LGG and LGGs (no significant difference between LGG and LGGs in this respect). The cardioprotective effect of LGG and LGGs against IH/HFHFD was associated with up-regulation of nuclear factor erythroid 2-related factor 2(Nrf2)-mediated antioxidant pathways. Our findings suggest a cardioprotective effect of LGG and LGGs in obese mice with OSA.