Protein arginine methyltransferase 1 (PRMT1) is the predominant asymmetric (type I) methyltransferase in mammalian cells. Mounting evidence suggested that PRMT1 is essential to embryonic development and tumor pathogenesis, but its role in normal adult hematopoiesis is less studied. We used a Prmt1 conditional knockout (KO) mouse model to identify the role of PRMT1 in normal adult hematopoiesis. The results indicated that deletion of PRMT1 results in anemia and leukopenia, reducing terminal erythroid and lymphocyte differentiation. Additionally, we found a significant decrease of megakaryocyte progenitors (MkPs) compared with similarly treated littermate control mice. The frequency of short-term hematopoietic stem cells (ST-HSCs) and granulocyte-macrophage progenitors (GMPs) populations were significantly lower in PRMT1f/f/Mx1-CRE bone marrow (BM) compared with littermate control mice. Importantly, in-vitro replating assays and BM transplantation results revealed that PRMT1 KO results in reduced hematopoietic stem and progenitor cells (HSPCs) self-renewal capacity. Thus, we conclude that PRMT1 is required for hematopoietic differentiation and the competitive fitness of HSPCs, and we believed that PRMT1 serves as a key epigenetic regulator of normal hematopoiesis that occurs throughout life.

Protein arginine methylation is one of the most common posttranslational modifications that affects the function of many proteins, including both histone and non-histone proteins. A family of enzymes, namely, protein arginine methyltransferases (PRMTs), catalyze the formation of mono- or dimethyl arginine on a variety of protein substrates [1], thereby regulating many cellular processes including RNA processing, gene transcription, DNA damage repair, signal transduction and chromosome translocation [2]. PRMT1 is the predominant asymmetric (type I) methyltransferase in mammalian cells, responsible for over 85% of arginine methylation activity. Mounting evidence in cancers, including our own results in leukemia, indicates that aberrantly overexpressed PRMT1 could serve as a potential therapeutic target [3-10]. Homozygous PRMT1 deletion is embryonically lethal [11, 12], but its role in normal adult hematopoiesis is less studied. Others have reported that PRMT1 function is involved in normal B cell differentiation [13]. Some reported that PRMT1, functioning through p38a, serves as a novel molecular switch in lineage-specific differentiation toward megakaryocytes or erythrocytes [14, 15]. While the detailed function of PRMT1 in adult hematopoietic stem and progenitor cells (HSPCs) self-renewal and differentiation is still largely unknown. In this study, we identified the role of PRMT1 in normal adult hematopoiesis using a Prmt1 conditional knockout (KO) mouse model (PRMT1f/f/Mx1-Cre). Overall, PRMT1 deletion in adult mice leads to anemia and leukopenia, thereby disrupting normal hematopoiesis. Although PRMT1 KO barely affected the primary mouse LSK frequency, BM transplantation studies revealed that PRMT1 KO results in reduced competitive fitness of HPSC.

Prmt1 conditional KO mice (PRMT1f/f/Mx1-Cre) were generated by crossing PRMT1f/f mice [16] with Mx1-Cre mice. To induce Prmt1 deletion, 6- to 8-week-old PRMT1f/f /Mx1-Cre mice were injected intraperitoneally with 14 mg/kg per dose of polyinosinic-polycytidylic acid (pIpC; InvivoGen) every other day for 7 doses. Similarly treated littermates lacking Mx1-cre alleles were used as control. All mice were maintained and all procedures were performed in accordance with federal and state government guidelines and established institutional guidelines and protocols approved by the Institutional Animal Care and Use Committee at City of Hope.

105 cells per mL per dish were seeded in MethoCult and were counted at day 7 according to the manufacturer's protocol. For replating assays, cells from each plate were harvested and replated at 1

105 cells per mL per dish after 7 days CFC culture.

To determine PRMT1 function in normal hematopoiesis, we first measured Prmt1 gene expression levels in multiple hematopoietic subpopulations from C57BL/6 mice (6- to 8-week-old). We sorted different subpopulations according to phenotypic markers and then Prmt1 expression levels were determined by quantitative RT-qPCR. There is no statistical significant difference of Prmt1 mRNA levels among CMP, MEP and GMP, and the level of Prmt1 mRNA in the phenotypic LSK was lower relative to GMP (Fig. 1A).

To determine PRMT1 function in hematopoiesis, we have developed conditional Prmt1 KO mouse (PRMT1f/f/Mx1-Cre) by crossing Mx1-Cre transgenic mouse with Prmt1-floxed (Prmt1f) mice as previously described [7]. The PRMT1 conditional allele consists of exons 4 and 5, which encode part of the methyltransferase domain, flanked by loxP sites. Deletion of these exons creates a frameshift, resulting in a functionally null allele (Fig. 1B). We induced Prmt1 deletion of adult hematopoietic cells by injection of 7 doses of pIpC (14 mg/kg every other day, injection, i.p.), and simultaneously, pIpC-treated littermates (Mx1-Cre-negative) were included as controls. PRMT1 flox alleles were confirmed by PCR analysis (Fig. 1C). PRMT1 deletion at protein levels was confirmed by Western blot analysis (Fig. 1D).

Deletion of PRMT1 results in anemia and leukopenia

Overall, deletion of PRMT1 had a prominent effect on adult hematopoiesis in 6- to 8-week-old mice. Analysis of the peripheral blood of these mice revealed significant decreases in red blood cells (RBCs), hemoglobin (Hb) and white blood cells (WBCs) at 12 weeks post pIpC induction and the absolute number of neutrophils and lymphocytes were decreased (Fig. 1E). Notably, RBC and Hb counts were starting to decrease as early as 4 weeks after pIpC induction (Supplemental Fig. 1) compared with littermate controls. Importantly, BM cellularity of PRMT1-KO mice was decreased compared with littermate controls (Fig. 1F left, histologic examination was shown in Fig. 1G) but, PRMT1 deletion did not have obvious effects on spleen cellularity at 12 weeks post pIpC induction (Fig. 1F right). Moreover, the Prmt1 heterozygous KO mice had normal peripheral blood counts and normal BM, spleen cellularity (data not shown). Intriguingly, approximately one out of eight of the PRMT1f/f/Mx1-CRE mice died within 5 months, whereas none of the PRMT1f/f mice (n=6) died at the end point of our evaluation (Supplemental Fig. 2).

To evaluate the effects of PRMT1 deletion on adult hematopoiesis, we first determined the frequency of erythroid (Ter119+), mature myeloid (Mac1+/Gr1+), B cells (B220) and T cells (CD3) in the BM of PRMT1-deleted mice and found that Ter119+ and B220+ subsets were significantly decreased compared with littermate controls, while the myeloid and T cell populations were relatively intact (Fig. 2A). Importantly, we also calculated the absolute numbers of erythroid, myeloid, T and B cells on the basis of their frequencies and BM cellularity and observed overall decreases in all lineage cells (Fig. 2B). The observation of B cell maturation defects is consistent with other reports using B cell specific PRMT1 KO mice [17-19]. 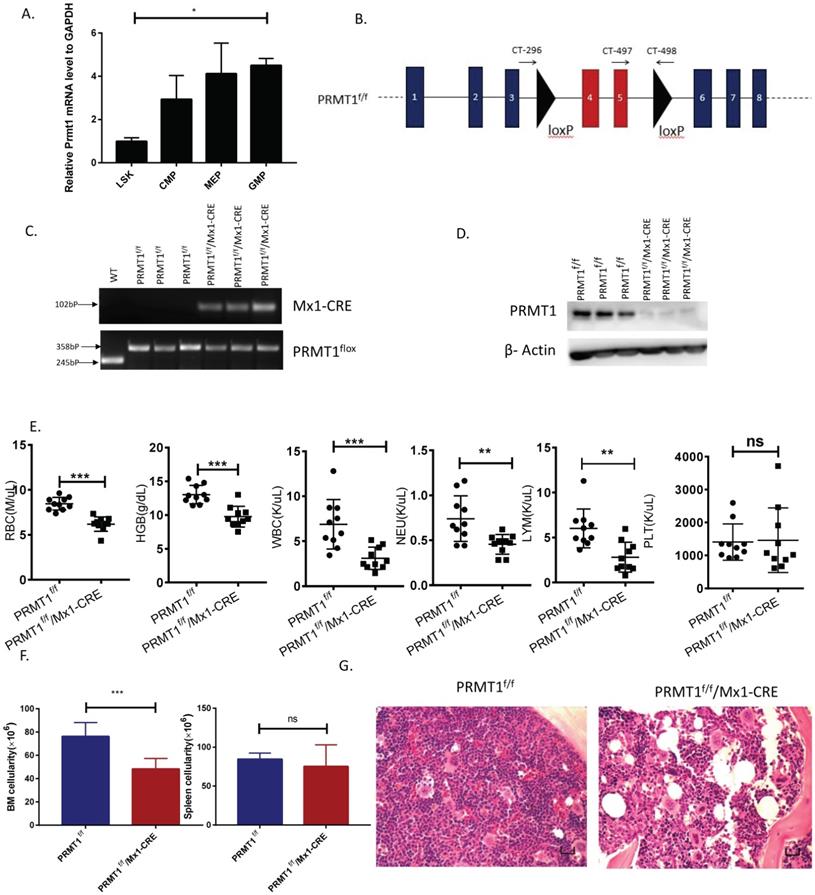 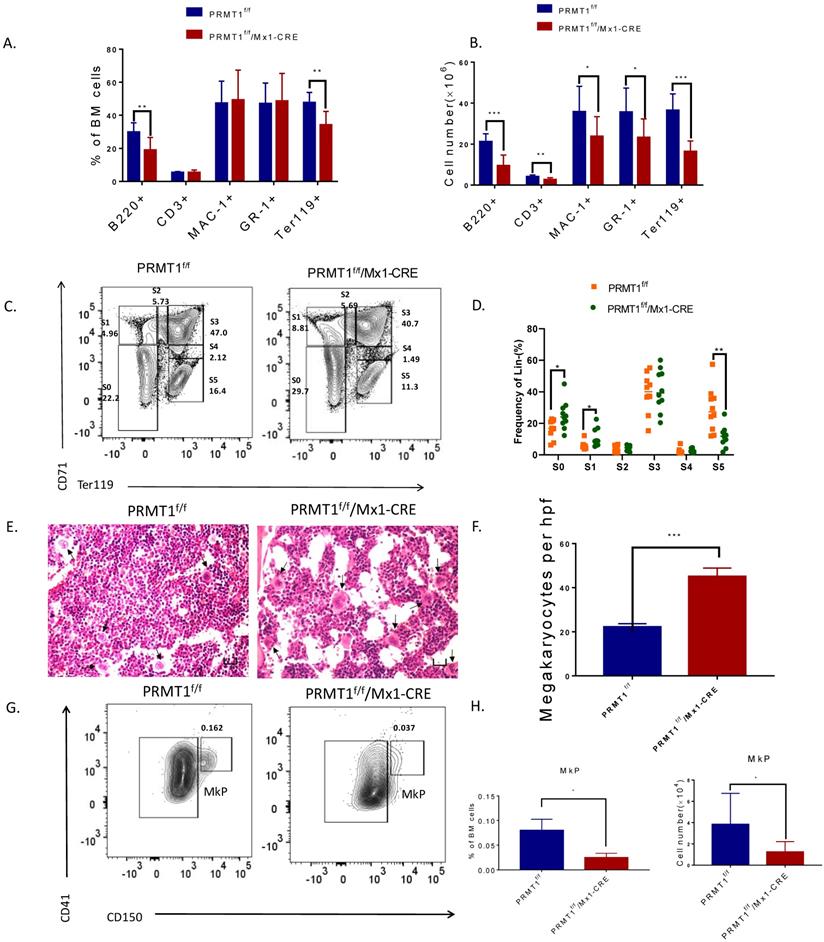 To evaluate the long-term repopulation capacity of Prmt1 null HSCs, we also performed noncompetitive BM transplantation. BM cells (2× 106 cells) isolated from primary donor mice in which PRMT1 deletion was not induced, littermate controls were also included as a separate group. Total BM cells from PRMT1f/f/Mx1-CRE or control mice were harvested and transplanted into lethally irradiated CD45.1+ congenic recipients (Fig. 5A). Four weeks post BMT, PRMT1 deletion was induced by pIpC induction. Thereafter, we monitored donor cells in PB. Notably, CD45.2 cells were significantly reduced in PB of mice receiving PRMT1 KO BM cells (date not shown). We did CBC analysis at 4 weeks after pIpC injection, showing WBC was slightly decreased (Supplemental Fig. 3). While analyzing BM at 16 weeks post BMT, we found PRMT1 KO markedly reduced CD45.2+ donor chimerism of multiple lineages as well as HSPCs subsets relative to those of controls (Fig. 5B). In contrast, PRMT1 deletion had no marked effect on the frequency of CD45.2 cells in the spleen (Fig. 5C). In BM, the absolute numbers of HSPCs subsets and lineages were markedly reduced compared to littermate control mice (Fig. 5B). In spleen, the absolute numbers of LSK and ST-HSCs showed a significant decrease compared with similarly treated littermate control mice (Fig. 5C).

PRMT1 is known to be responsible for at least 85% of all arginine methylation catalyzation in mammalian cells [21]. PRMT1 can regulate myeloid differentiation and lymphocyte development [22, 23], however, its function in HSC self-renewal as well as adult hematopoiesis has been unclear. In the present study, we generated a PRMT1 conditional KO mouse model. Using the Cre/lox-conditional system, we characterize the role of PRMT1 in regulating adult mouse HSC function. We found that the loss of PRMT1 expression leads to cytopenia and affects HSC repopulation and multilineage differentiation.

Our studies indicate that PRMT1 deficiency leads to a significantly impaired normal hematopoiesis. Adult HSCs are maintained in a quiescent state, which is important for their longevity and function [24]. Doubling time analysis at homeostasis has shown that ST-HSCs and MPPs divide more frequently than LT-HSCs [25, 26]. Moreover, our chimeric BM transplant experiments demonstrate that the PRMT1 deletion indeed decreased HSPCs in vivo repopulating capacity. 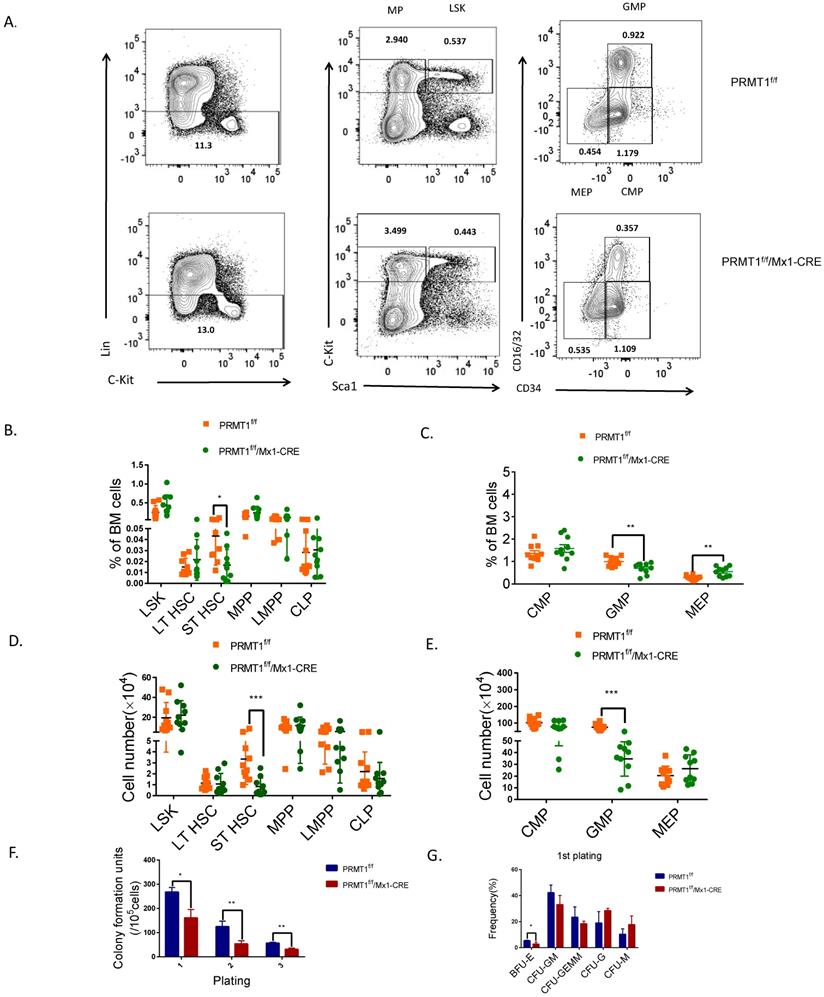 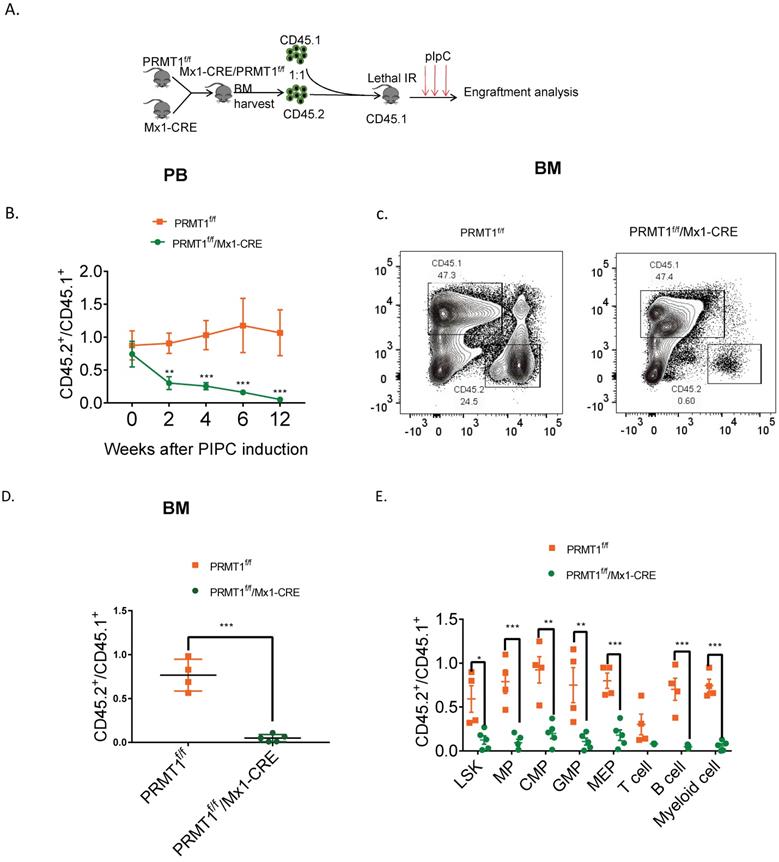 In addition, we found an erythroid maturation block in PRMT1f/f/ Mx1-CRE mice, in agreement with other's findings that, mediated through p38a, PRMT1 could promote lineage-specific differentiation toward erythrocytes [14, 15]. Further supporting our results, others have demonstrated that inhibition of PRMT1 through RNAi depleted levels of the activating histone mark H4R3me and increased levels of the repressive H3K9me and H3K27me marks at the β-globin locus in erythrocytes[27], contributing to an anemia phenotype. Regarding megakaryocyte maturation, we noticed that the frequency of MEPs was higher in PRMT1 KO compared with littermate controls. Additionally, through histology analysis of BM, we did find increased number of megakaryocytes. Our result is in agreement with others study, showing PRMT1 overexpression antagonized megakaryocytic differentiation [28]. However, in our mouse studies, we found PRMT1 KO did not affect platelet level. Through mice femur histology analysis, we could not distinguish granular megakaryocyte or platelet-forming megakaryocyte. And the phenotypic marker of platelet-forming megakaryocyte is still not clear. Thus, we postulate that the platelet-forming megakaryocytes did not increase; conversely, the granular megakaryocyte may increase. 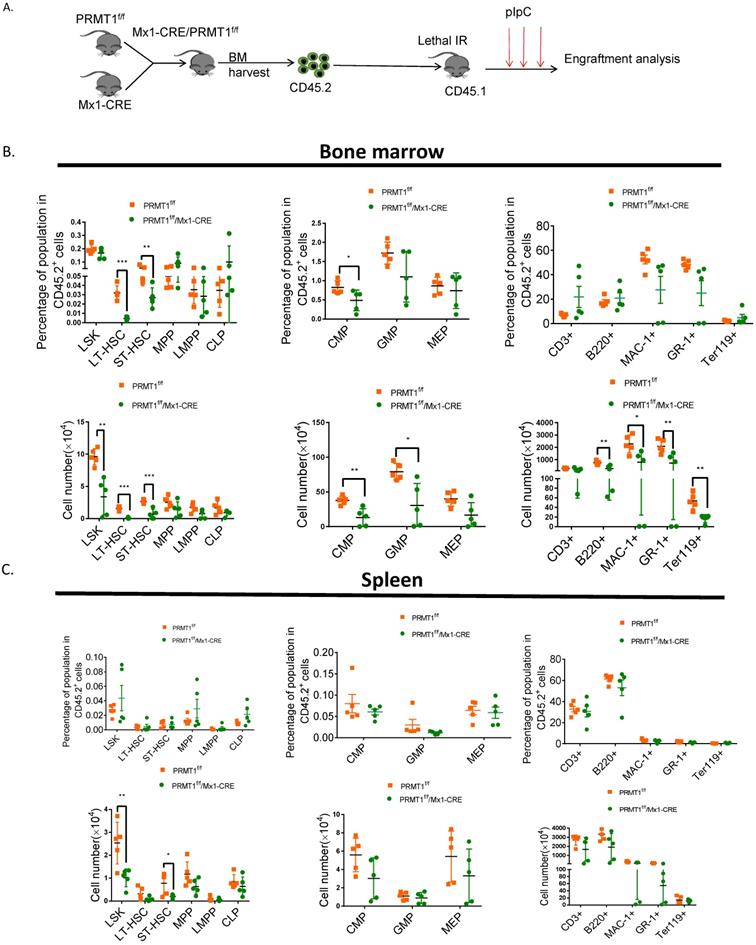 PRMT1 is an active component of signal transduction pathways including those from the B-cell receptor (BCR) [4, 18, 29-32]. Our flow-cytometry analysis showed a significant decrease in the frequency and absolute number of mature B cells in PRMT1f/f/Mx1-CRE mouse BM, and, consistent with other's results [17], found that mice with a B-cell-specific deletion of PRMT1 display a partial block in B cell development at the pre-B cell stage, confirming that PRMT1 is required for lymphocyte development. Infantino et al [19] undertook an immunology analysis on mice with Prmt1 deletion in mature B cells. Their analysis revealed that PRMT1-catalyzed protein substrate methylation is essential for normal B cell proliferation, differentiation and survival. Taken together, our results show that PRMT1 is required for normal B cell development.

Although knockout of Prmt1 in mice can result in embryonic lethality at embryonic day 7.5[11, 21], but Prmt1-conditional KO adult mice didn't die till pIpC induction 16 weeks (supplemental Fig. 2). These results suggested that PRMT1 inhibitors could be safely applied to hematological malignancies.

In conclusion, PRMT1 is required at multiple stages of hematopoietic differentiation. PRMT1 function is important for HSPCs' competitive fitness. Our results indeed identify that PRMT1 serves as a key epigenetic regulator of normal hematopoiesis that occurs throughout life.

3. Baldwin RM, Morettin A, Côté J. Role of PRMTs in cancer: Could minor isoforms be leaving a mark?. World journal of biological chemistry. 2014;5:115