Renal fibrosis is a hallmark of most forms of progressive renal disease [1]. The unilateral ureteral obstruction (UUO) method, involving ligation of the ureter, most commonly of the left one, has been widely adopted to establish animal models with interstitial fibrosis. The kidney of the ligated ureter is conventionally termed as the obstructed kidney, which exhibits several important events such as mechanical stretching, activation of renin-angiotensin-aldosterone system (RAS), loss of renal epithelial cells, inflammation, oxidative stress, macrophage infiltration and fibroblast activation, together leading to the final fibrosis [2]. Histologically, the obstructed kidney is characterized by tubular dilation, interstitial expansion, loss of renal parenchyma, infiltration of inflammatory cells, and accumulation of extracellular matrix (ECM) [2].

Some molecular mechanisms have been identified involved in renal interstitial fibrosis. Signaling pathways such as Notch, Wnt and Hedgehog, which are crucial for kidney development, were shown overactivated and to play positive roles in UUO-induced fibrosis [3, 4, 5, 6]. Moreover, Erk and Akt signaling pathways were revealed to have a pro-proliferative effect on myofibroblasts by affecting molecules involved in cell cycle such as c-Myc, cyclin D1 and p21 [7, 8]. Recently, the mammalian target of rapamycin (mTOR) was found implicated in fibroblast proliferation and activation [9, 10, 11, 12]. Activation of Stat3 signaling may be another mechanism underlying renal interstitial fibrosis. Expression of phosphorylated Stat3 was enhanced in both tubular epithelial cells and interstitial fibroblasts after UUO [13]. Furthermore, blockade of Stat3 pathway was shown to inhibit fibroblast activation in obstructive nephropathy [14, 15].

Ruxolitinib is a potent and selective inhibitor of Jak1/2. It has been approved for the treatment of myelofibrosis, a neoplasm characterized by bone marrow fibrosis, and in which Jak/Stat pathway is over-activated. Ruxolitinib ameliorates disease-related symptoms, improves health-related quality of life, and increases patient survival [16, 17, 18]. Notably, a phase 3 study demonstrated that 15.8% patients with Ruxolitinib treatment had improved fibrosis [19]. 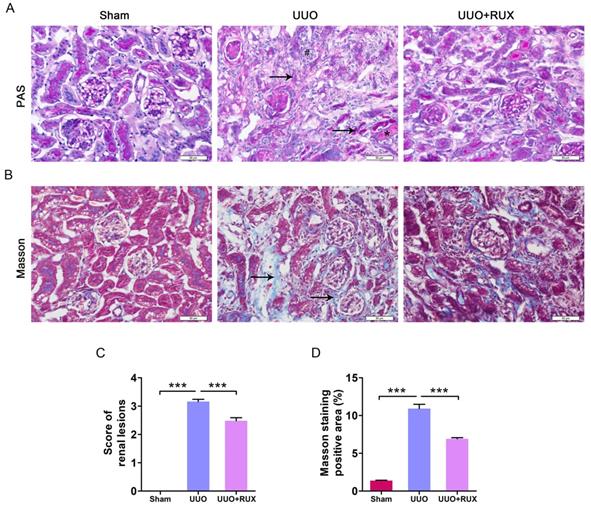 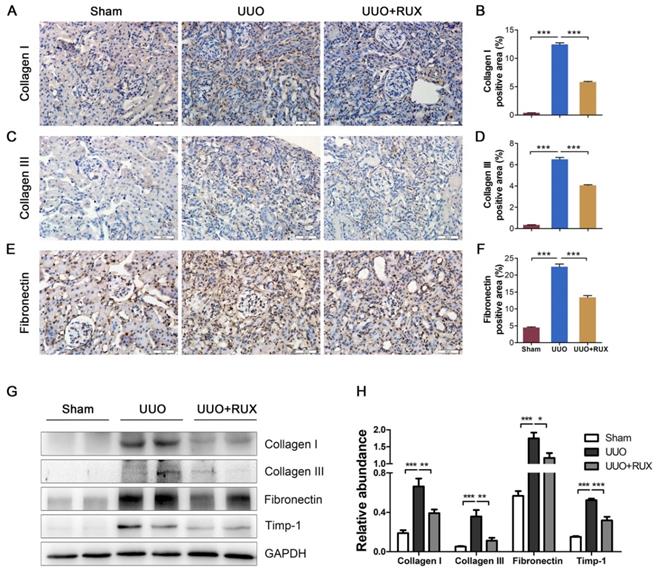 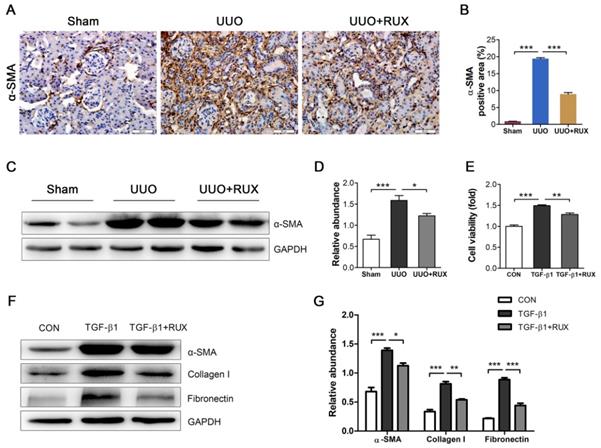 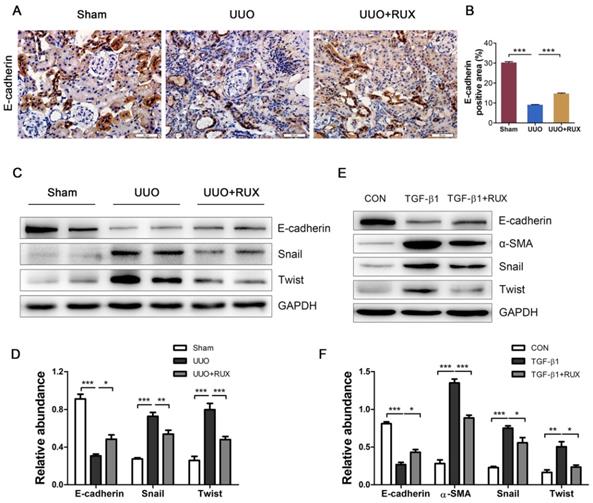 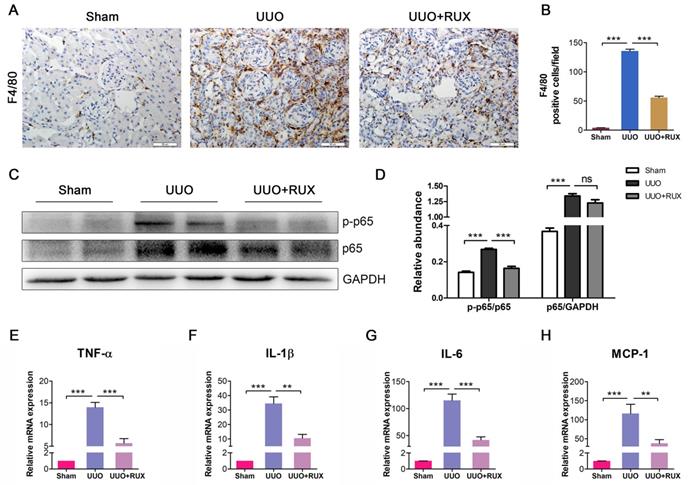 Renal tubular epithelial cell apoptosis is an important event in obstructed kidney. TUNEL staining was used to determine cell apoptosis. It was shown that apoptotic cells increased in UUO kidneys. Ruxolitinib treatment ameliorated the situation (Figure 6A-B). Cleaved caspase-3 was subsequently examined. As shown by both Immunohistochemistry and Western blot, cleaved caspase-3 expression increased in UUO kidneys, while decreased after Ruxolitinib treatment (Figure 6C-F). As oxidative stress is one mechanism underlying cell apoptosis, we thereafter investigated levels of Malondialdehyde (MDA) and total Superoxide dismutase (T-SOD). As expected, UUO resulted in an increase in MDA, and a reduction in T-SOD; Ruxolitinib treatment restored T-SOD and MDA towards normal level (Figure 6G-H). 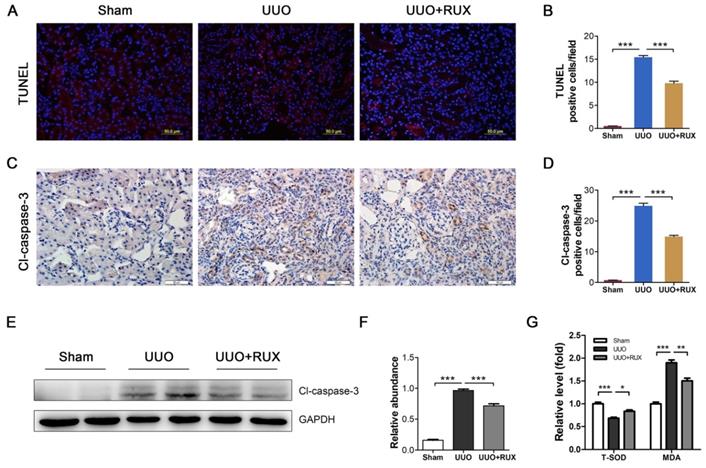 UUO kidneys overproduce chemokines and their receptors [24, 25, 26]. These chemokines are responsible for the recruitment of inflammatory cells, which, when activated, produce more cytokines to sustain and enhance inflammation. MCP-1 recruits macrophages into renal interstitium [27, 28, 29]. Our study showed that Ruxolitinib treatment reduced MCP-1 expression as well as macrophage infiltration in the obstructed kidneys. In contrast, blockade of Stat3 by S3I-201 failed to suppress UUO-induced MCP-1 upregulation, but still reduced macrophage infiltration, suggesting that other cytokines were involved in macrophage recruitment [15]. Besides growth factor such as TGF-β1, cytokine such as IL-6 also contributes to fibroblast activation and fibrosis [30]. A recent study showed that blockade of IL-6 improved UUO-induced fibrosis [31]. 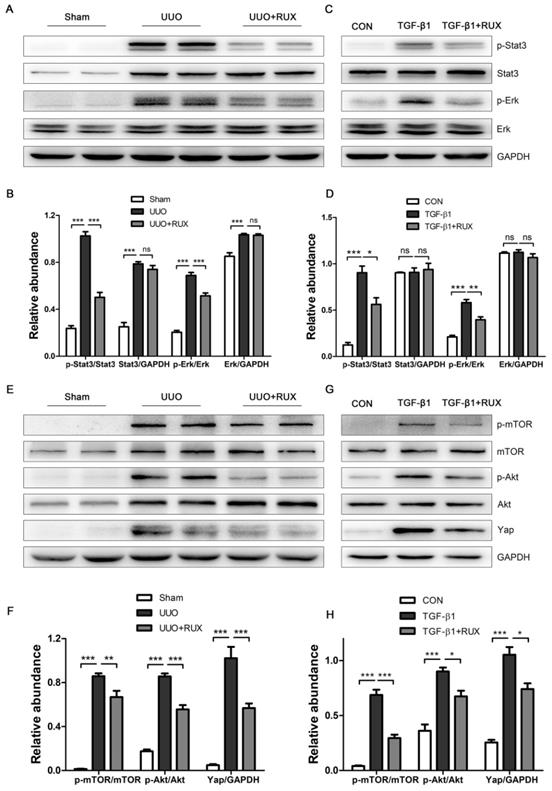 Male C57BL/6 mice (Beijing Huafukang Biotechnology, China) that weighed 22-24g were randomly assigned to three groups with 5 mice in each group as follows: (1) Sham-operated mice with vehicle (Sham); (2) UUO mice with vehicle (UUO); (3) UUO mice treated with Ruxolitinib (UUO+RUX). To establish UUO model, mice were given general anesthesia by intraperitoneal injection of pentobarbital (50mg/kg body weight). The left ureter was exposed via a left flank incision, ligated with 4-0 silk at two points, and cut between the 2 ligation points. The Sham-operated group had no ligation. For in vivo experiments, Ruxolitinib was dissolved in PEG300/dextrose 5% in a ratio of 1:3 (PEG/dex) and administered to mice by oral gavage at a dosage of 30 mg/kg twice daily for 14 days immediately after UUO or Sham-operation. The Sham and UUO group received PEG/dex alone as vehicle. The mice were sacrificed, and the left kidneys were collected at days 14 after surgery. All procedures were performed in accordance with guidelines approved by the Institutional Animal Care and Use Committee of China Medical University.

Rat fibroblast NRK-49F and rat renal tubular epithelial cell NRK-52E were cultured in Dulbecco's modified Eagle's medium (DMEM) containing 10% fetal bovine serum (FBS) and 1% penicillin/streptomycin at 37°C with 5% CO2. 2ng/ml TGF-β1 was used to activate NRK-49F cells or induce NRK-52E cell EMT. These cells were starved for 12 h and then exposed to TGF-β1 with or without 5μM Ruxolitinib for 24 hours.

Tissue sections were deparaffinized, hydrated, and incubated with 3% H2O2 to remove endogenous peroxidase. Then the sections were incubated with primary antibody overnight at 4 ℃, and next with biotinylated secondary antibody for 30 min at 37 °C. Subsequently the sections were stained with DAB, re-stained in hematoxylin, dehydrated, and sealed with cover slides. Ten non-repeating images of each sample were acquired using microscope image system. Positive signals and numbers of positive cells were quantified using Image-Pro Plus software.

Equal amount of protein was isolated by SDS-PAGE, and transferred to PVDF membranes which was blocked by 5% bovine serum albumin or skimmed milk for 2 h at room temperature, and incubated with primary antibody overnight at 4°C. The membrane was subsequently incubated with peroxidase-conjugated goat secondary antibody (1:5000, ZSGB Bio) for 2 h at room temperature. Protein content was determined by SuperSignal™ West Pico PLUS Chemiluminescent Substrate (Thermo Scientific).

The apoptotic cells in kidney tissue sections were detected using a TUNEL apoptosis detection kit (KeyGEN BioTECH, China, KGA7061) according to the instructions provided by the manufacture. Briefly, paraffin-embedded sections were treated with fresh diluted proteinase K for 20 min at 37 ℃ after deparaffinage and rehydration. TdT enzyme reaction mixture was applied to each slide at 37 ℃ for 60 min. Then, Streptavidin-TRITC was added into the slides at 37 ℃ for 30 min. At last, the slides were reacted with DAPI solution for 10 min at room temperature. The number of TUNEL-positive nuclei per field was counted in 10 non-repeating micrographs for each sample.

Cell viability was measured at 48 h using an MTT assay kit (Beyotime, China, C0009). 2,000 Cells in 96-well plate were washed and incubated with MTT staining solution for 4 h. Then Formazan solving solution was added. The cell viability was indicated by the absolution value at 570nm.

T-SOD (A001-1) and MDA (A003-1) kits were purchased from Jiancheng Bioengineering Institute (Nanjing, China). Briefly, kidney tissues were prepared into 10% homogenates which were centrifuged at 3,000 rpm for 10 min. The supernatants were collected to measure levels of T-SOD and MDA according to the instructions.

All the experiments were conducted at least three times. GraphPad Prism 7.0 was used to analyze the data, and all data were expressed as the Mean ± SEM. Inter-group comparisons were performed using One-way analysis of variance (ANOVA). Multiple means were compared by Tukey′s test. P<0.05 is considered as significant.

This work was supported by a grant from Department of Science and Technology Liaoning Province (2017225028).

17. Wade R, Hodgson R, Biswas M, Harden M, Woolacott N. A Review of Ruxolitinib for the Treatment of Myelofibrosis: A Critique of the Evidence. Pharmacoeconomics. 2017;35:203-13