Colorectal cancer (CRC) is one of the most common types of cancer, with a high disease-related mortality among all cancers [1, 2]. Metastasis is the leading cause of poor prognosis for CRC [3], therefore, better understanding of the mechanisms underlying metastasis suppression and identification of genes involved in metastasis suppression could definitely contribute to the treatment of CRC patients.

Brain-expressed X-linked (BEX) genes belong to a family of genes that reside on the mammalian X chromosome [4]. BEX proteins have been reported to be involved in transcriptional regulation and signaling pathways in neurodegeneration, cell cycle and tumor growth [5-8]. Recent reports have implicated that BEX2 is involved in tumor development and progression in several types of cancer, such as glioblastoma, glioma and breast cancer [7-9]. However, BEX2 appears to exhibit diverse expression patterns and functions in different types of tumors, with conflicting evidence regarding the role of BEX2 in different cancers. BEX2 is highly expressed in glioblastomas and promotes the proliferation and survival of glioblastomas mediated by the nuclear factor-kappa B signaling [6]; BEX2 can also promote cell migration and invasion in glioma [7]. On the contrary, in primary glioma, BEX2 is epigenetically silenced and exhibits extensive promoter hypermethylation, and re-expression of BEX2 results in significantly suppressed tumor proliferation [10]. Taken together, these data indicate that BEX2 is involved in the regulation of tumorigenesis and metastasis, and its potential functions largely depend on the cancer type and cell-specific context. In our previous studies, we demonstrated that knockdown of BEX2 significantly decreased the proliferation ability of CRC cells via the JNK/c-Jun pathway both in vitro and in vivo [11]. Interestingly, our previous findings showed that in a subcutaneous xenograft model, SW620/shBEX2 cells caused higher liver metastasis rate (4/5) than SW620/Ctrl cells (1/5), suggesting that BEX2 may inhibit CRC cell metastasis. However, how BEX2 regulates CRC metastasis remains unclear.

The general protocols for plasmid construction have been previously described [19]. All empty vectors were purchased from Takara Biomedical Technology (Beijing, China). All of the recombinant plasmids were identified and confirmed by DNA sequencing. Transfection of HEK293 cells was performed using Lipofectamine 2000 (Invitrogen) according to the manufacturer's protocol.

The effect of BEX2 on the migratory and invasive ability of cells was determined using the Transwell polycarbonate membrane (3422, Costar, New York, NY, USA), which was originally described as the Boyden chamber assay.

All cells were seeded on coverslips in 12-well plates. After transfection for 24 hours, the cells were fixed, permeabilized, and incubated with the indicated antibodies. The details of the experimental procedure were described previously. Images were obtained using a Zeiss LSM 710 laser-scanning confocal imaging system (Carl Zeiss AG, Oberkochen, Germany).

The orthotopic mouse model of CRC was established using cecal wall injection technique according to previous description [20, 21]. In brief, after anesthesia, the cecum of nude mouse was exteriorized via laparotomy. A total of 1×106 CRC cells (50 μl) were injected into the cecal wall using a 27-gauge needle. The cecum was subsequently returned to the abdominal cavity and closed with running sutures.

Another mouse model, the hemi-spleen injection model, was also used. After anesthesia and laparotomy, the spleen was first split into two parts with two titanium clips, leaving the vascular pedicle intact for each half of the spleen. BEX2-/- DLD1 cells and DLD1 control cells (1×106 CRC cells per mouse) were inoculated into one hemi-spleen, which was further resected. After injection for 45 days, an in vivo imaging system was used to detect liver metastases.

All mice were monitored twice daily. Overall survival was analyzed using the Kaplan-Meier method. All animal experiments were approved by the Animal Care and Use Committee of Zhejiang University.

Analysis was performed with SPSS 22.0 software for Windows. Comparisons between two groups were carried out using a t-test for independent samples. A p value less than 0.05 was considered as statistical significance.

The CRISPR/Cas9 system was employed to stably knock out BEX2 in CRC cell line DLD1, in consideration of the relatively high protein expression of BEX2 in DLD1 cell line compared to other CRC cell lines. The sequence results (Figure 1A) showed that 5 bps in the translation initiation region of BEX2 gene were completely deleted in BEX2-/- DLD1 cells, therefore, the whole amino acid sequence of BEX2 could not be translated because of the frameshift mutation. In addition, the protein expression level of BEX2 and knockout efficiency of BEX2-/- DLD1 cells were confirmed by western blotting (Figure 1B).

In a preliminary experiment, SW620 cells were transfected with lentivirus shRNA and control vector. As a result, BEX2 expression was reduced by 70% in SW620/shBEX2 cells compared with that in control cells (SW620/Ctrl cells) according to western blotting and qPCR, as described previously. Interestingly, in our subcutaneous models, higher liver metastasis rate (4/5) was observed in mice inoculated with SW620/shBEX2 cells than those inoculated with SW620/Ctrl cells (1/5) (Supplementary Table 2). And the liver metastasis lesion was confirmed by HE staining (Supplementary Figure 1).

Intriguingly, the above outcomes indicated that knockdown of BEX2 was more likely to cause liver metastases of CRC. Thus, we aimed to further confirm whether BEX2 played a causal role in regulating CRC cell mobility, migration and invasion ability. To this end, the effects of BEX2 on the mobility, migration and invasion abilities of CRC cells were first examined in vitro.

The migration of BEX2-/- DLD1 cells was significantly enhanced compared with that of control cells in the wound-healing assay (Figure 1C). Consistently, the Transwell migration assay demonstrated that BEX2-/- DLD1 cells had enhanced migration ability than control cells (Figure 1D). Similar results were also observed in the Transwell invasion assay (Figure 1E). To confirm the inhibitory effect of BEX2 on migration and invasion, another colon cancer cell line, HCT116, was used. Consequently, HCT116/shBEX2 cells displayed significantly enhanced migration and invasion ability compared to HCT116/ctrl cells (Supplementary Figure 2A and B). 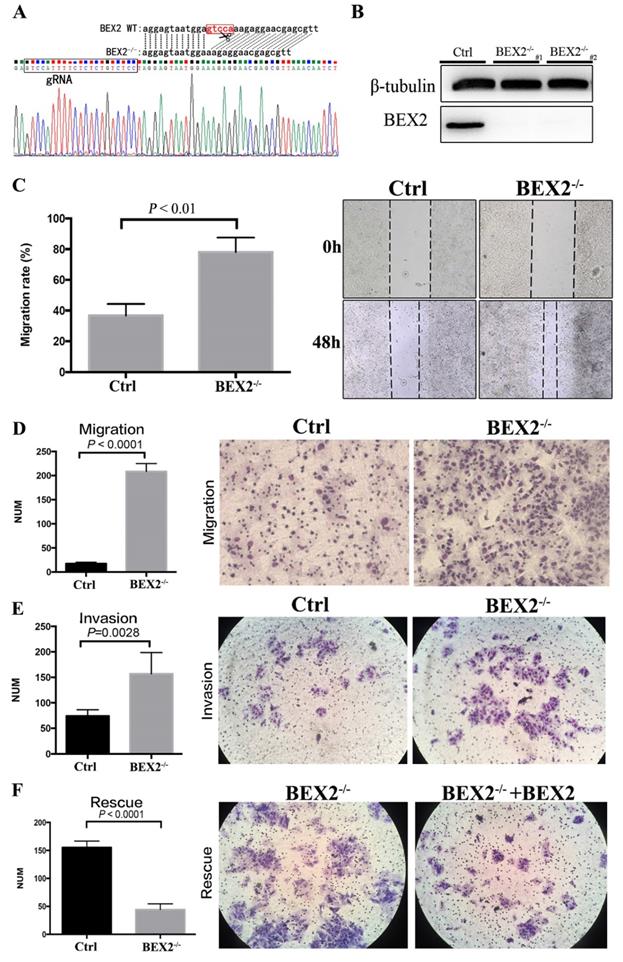 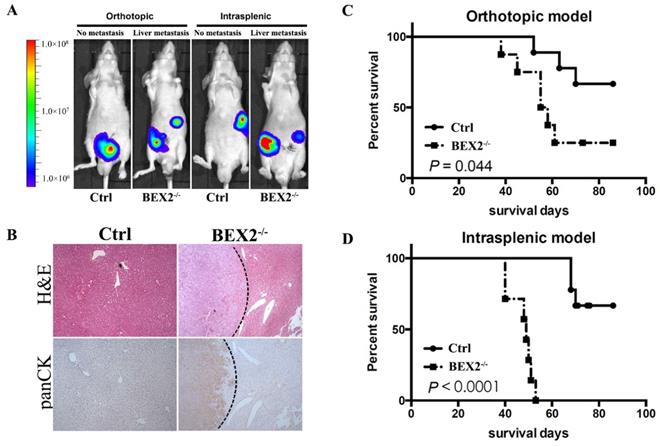 Afterwards, we assessed the effects of BEX2 on tumor metastasis in vivo by using mouse models. Mice injected with BEX2-/- DLD1 cells displayed higher more liver metastasis rate than the mice in the control group (Figure 2A and B).

In the hemi-spleen injection model, we found that 100% of the BEX2-/- DLD1 mice had metastases, whereas only 60% of the control mice had metastases in their livers (Table 1). Another mouse model [20, 21], the orthotopic model, was also used to determine the effects of BEX2 on liver metastasis. As shown in Table 1 and Figure 2A, more metastatic lesions were detected in BEX2-/- DLD1 mice than the control mice. All metastatic lesions were confirmed by immunohistochemistry assay stained with pan-cytokeratin antibody (Figure 2B).

Taken together, these results demonstrated that BEX2 silencing exerted a potent impact on poor survival by inducing CRC metastasis. 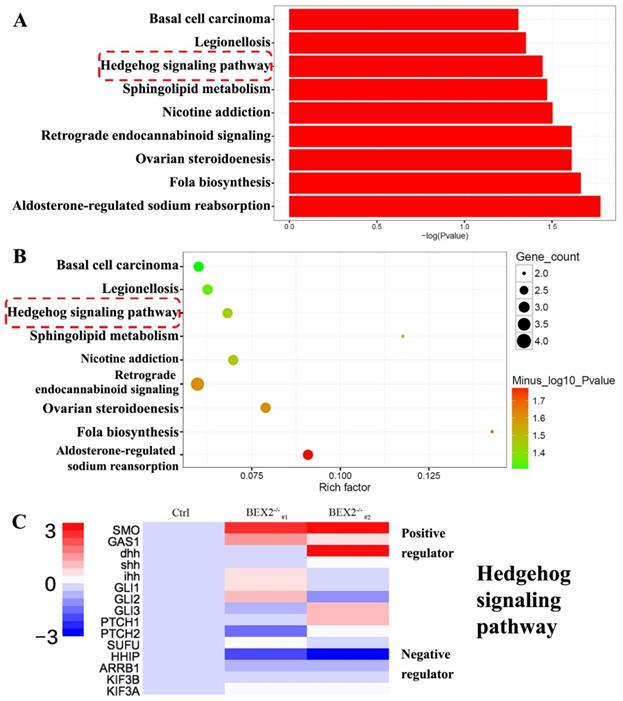 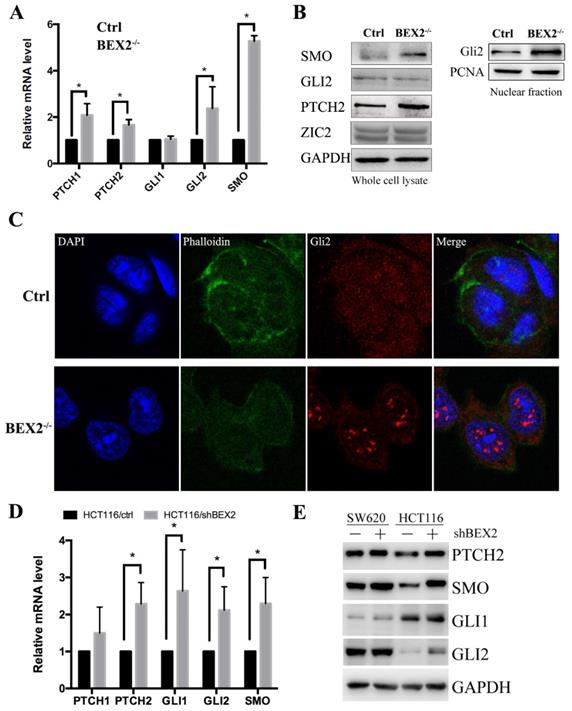 To confirm the relationship between BEX2 and the hedgehog signaling pathway, qPCR and Western blotting were performed to compare several important components of the hedgehog signaling pathway in BEX2 knockdown cells and control cells. The results showed that the mRNA levels of several important genes in the hedgehog signaling pathway, including PTCH2, Gli1, Gli2, and SMO, were significantly higher in HCT116/shBEX2 cells than those in HCT116/ctrl cells (Figure 4D). With respect to their protein levels, Western blot results showed that PTCH2, Gli1, Gli2 and SMO expression levels were lower in BEX2 knockdown SW620 and HCT116 cells than in control cells (Figure 4E). Additionally, we examined the relationship between BEX2 and Gli1 in the GSE3629 cohort from the GEO database, showing that BEX2 expression was negatively correlated with Gli1 expression (R value=-0.642, p value=2.1e-15, Supplementary Figure 3).

Gli family proteins are key transcriptional factors that could represent hedgehog signaling activity [12]. Gli2 was found to be increased in the nuclear fraction of BEX2-/- DLD1 cells. We further applied siRNA targeting Gli2 to knock down Gli2 in BEX2-/- DLD1 cells, followed by Western blotting to confirm the knockdown efficiency (Supplementary Figure 4A). Moreover, Transwell migration assays and invasion assays both showed that knockdown of Gli2 could inhibit the migration ability of BEX2-/- DLD1 cells (Supplementary Figure 4B). We hypothesized that BEX2 may interact with Gli2, and co-immunoprecipitation assay was performed. However, the result was negative (data not shown), indicating that Gli2 may not directly interact with BEX2. 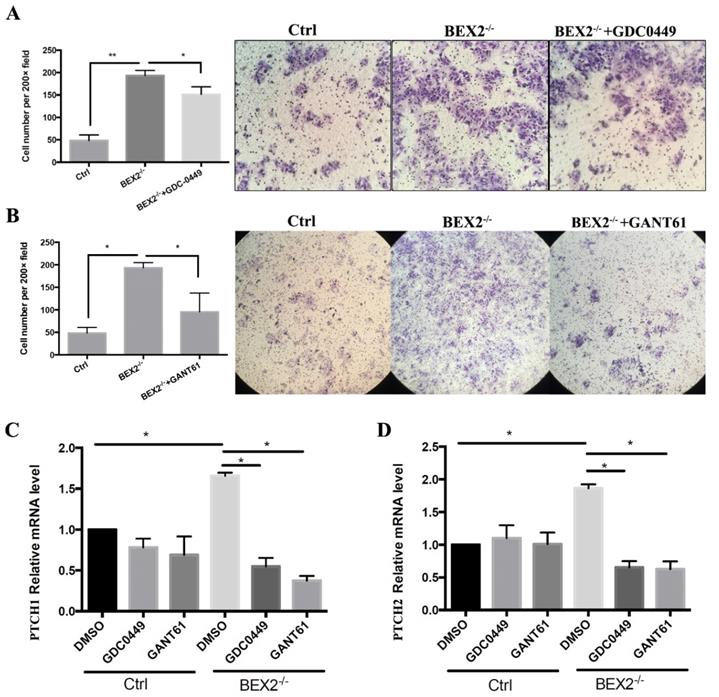 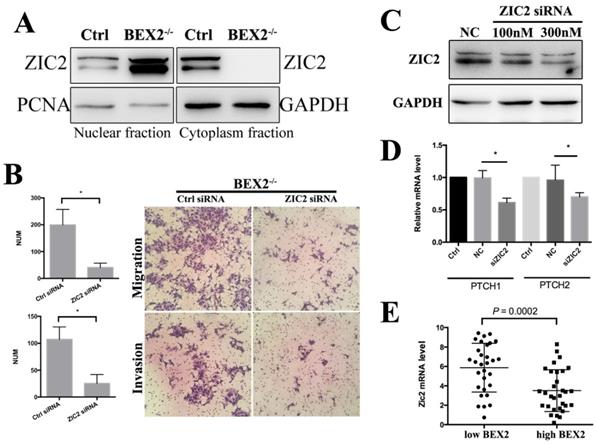 As Gli2 and BEX2 may not interact directly, we sought other possible regulatory mechanism. The Zic family and Gli family have been found to cooperate with each other and control the gene transcriptional activity and subcellular localization of each other [23]. Zic family members, including Zic1, Zic2 and Zic3, share five highly conserved C2H2 zinc finger (ZF) motifs [24]. And these domains show remarkably homologous with those of Gli family proteins [25].

Cancer cell metastasis involves multiple biological steps, and cancer cell migration and invasion are necessary for the malignant progression of cancer. Er Nie et al [26] reported that BEX2 downregulation decreased the migration and invasion in glioma cells by decreasing the nuclear and cytoplasmic protein levels of β-catenin. In our study, the complete depletion of BEX2 led to enhanced migration and invasion capacity of CRC cells. The mRNA and protein levels of β-catenin in DLD1 and BEX2-/- DLD1 cells were not obviously different, regardless of their nuclear or cytoplasmic location (data not shown). Wnt/β-catenin signaling has been reported to play an important role in promoting cancer metastasis; however, our study did not show Wnt/β-catenin signaling activation after BEX2 depletion in CRC cells.

In our previous study, we analyzed the expression level of BEX2 in 290 CRC patients in the GSE14333 sample cohort and observed that BEX2 expression levels were significantly higher in Dukes D stage patients than in other stage patients [11]. This result conflicts with the metastasis-inhibiting role of BEX2 in our current study. In fact, cancer metastasis is a complicated process driven by multiple genes and multiple steps. A single gene, BEX2 may not have a determinant role such that it can completely inhibit metastasis, while BEX2 may have certain regulatory effect on tumor masses in patients with Dukes D stage, especially in relation to hedgehog signaling molecules. We analyzed the expression of Zic2 in patients with Dukes D stage from the GSE14333 sample cohort, revealing that the BEX2 low expression group had significantly higher Zic2 expression than the BEX2 high expression group (Figure 6E). This finding indicated that BEX2 may have some relationship with Zic2, and more studies are needed to investigate the specific subgroup of tumor patients with Dukes D stage can be influenced by BEX2. We additionally explored the location of Zic2 after restoring BEX2 levels in BEX-/- cells; however, Zic2 was not found to return to the cytoplasm after restoring BEX2 in BEX-/- cells. There may be some underlying regulatory mechanism between Zic2 and BEX2, which deserves further investigation.