Hepatocellular carcinoma (HCC) is one of the most common cancers and is currently the third leading cause of cancer death worldwide. HCC incidence is highest in Asia, and more than 50% of cases are in China [1, 2]. Systematic chemotherapy, especially molecular targeted agents such as sorafenib, plays a key role in treating HCC, especially for patients with advanced disease; however, the median survival time of patients was extended by only three months [3, 4]. Cisplatin is extensively applied as the first-line chemotherapeutic agent for treatment in the clinic against a wide spectrum of cancers, including liver cancer, ovarian and small cell lung cancer[5, 6]. However, due to severe side effects and drug resistance, the clinical applications of DDP are largely limited [7]. Chemoresistance limits the use of chemotherapy in HCC. To date, the underlying mechanisms causing chemoresistance in HCC are largely unknown. Accordingly, uncovering the cellular and molecular mechanisms underlying the development of HCC chemoresistance is essential for developing effective chemotherapeutics and improving the prognosis of patients with HCC.

The miRNA expression patterns and functions in cancer can be tissue- and cell type-dependent. MiR-9 is involved in tumor proliferation and cancer cell autophagy, migration, and apoptosis, either as an oncogene or a tumor suppressor, based on the cancer type [14-18]. There is no consensus on whether miR-9 functions as an oncogene or a tumor suppressor in HCC. Ding et al. found that over-expression of miR-9-5p promotes HCC cell migration and invasion by targeting E-cadherin [19]. Sun et al. showed that upregulation of miR-9-5p enhances HCC cell migration and invasion through KLF17 (Krüppel-like factor 17) [20]. In HCC samples, high miR-9 expression was an independent prognostic factor of decreased survival [21, 22]. Higashi et al. showed that miR-9-3p plays a tumor suppressor role in HCC cells by targeting TAZ (tafazzin) [23]. Zhang et al. found that miR-9 plays a tumor-suppressive role in HCC partially by regulating the IGF2BP1/AKT&ERK (insulin-like growth factor 2 mRNA-binding protein 1/AKT and extracellular signal-regulated kinase) axis [24]. However, little is known about the role of miR-9 in HCC chemoresistance.

To detect the relative cell viability, the cells were incubated in 10% Cell Counting Kit-8 (CCK-8) assay (Dojindo, Kumamoto, Japan) diluted in culture medium at 37°C for 2 h. The cell proliferation rates were determined at 48 h post-treatment of cisplatin, and the optical density at 450 nm (OD450) value was quantified on a microtiter plate reader (Dynex, Chantilly, VA, USA). All reactions were performed in triplicate.

The cells were treated with miR-9 mimic, inhibitor, or negative control for 48 h and then with cisplatin (1 µg/ml) for 48 h. EdU staining was performed using a Click-iT EdU Imaging Kit (Invitrogen, Carlsbad, CA, USA) according to the manufacturer's instructions. The total number of cells (Hoechst 33342-positive cells) and the number of proliferating cells (EdU-positive cells) were recorded in three independent experiments, and the means were obtained. All reactions were performed in triplicate.

Protein was extracted from HCC cells with radioimmunoprecipitation assay (RIPA) lysis buffer (Beyotime, Shanghai, China) supplemented with a phenylmethylsulfonyl fluoride (PMSF) inhibitor (Beyotime), and quantitatively analyzed with a bicinchoninic acid (BCA) kit (Thermo Scientific, Waltham, MA, USA). The proteins were separated with 10% sodium dodecyl sulfate-polyacrylamide gel electrophoresis (SDS-PAGE), and then transferred to polyvinylidene fluoride (PVDF) membranes. The membranes were incubated with 5% non-fat milk containing 0.1% Tween 20 for 2 h at room temperature to block nonspecific binding. The membranes were incubated with primary antibodies against eIF5A2 (diluted 1:1000; Abcam(ab150439), Cambridge, MA, USA), β-actin(ab8226), E-cadherin(ab40772), vimentin (ab92547) (1:2000; Abcam) and GAPDH(Cell Signaling Technology, Inc.; cat no. 5174S; diluted 1:2,000)at 4°C overnight. After washing with Tris-buffered saline containing Tween 20 (TBST), the membranes were incubated with the secondary antibody( diluted 1:5000; Abcam(ab97051)) for 1 h at 37°C. The proteins were visualized using an ECL Plus detection system (Millipore, Billerica, MA, USA) The bands analyzed by Western Blot were cropped from different parts of the same and the different gel. Respective images were cropped for figure implementation. All reactions were performed in triplicate.

TUNEL was used to identify apoptosis in paraffin-embedded mouse tissue sections (5-mm) with an in situ cell death detection kit (Roche, Basel, Switzerland) according to the manufacturer's instructions. The apoptotic cells were observed under a light microscope (Olympus, Tokyo, Japan). The assay was independently repeated three times. The positive rates were measured using IPP 6.0 software. All reactions were performed in triplicate.

The statistical significance of the results was determined using the Student t-test or one-way analysis of variance (ANOVA). P < 0.05 was considered statistically significant.

To investigate the role of miR-9 in the cisplatin sensibility of HCC cell lines, firstly, we collected 20 paired HCC tissues and normal tissues and detected miR-9 expression. Compared with control, the level of miR-9 was decreased in tumor tissues in Figure 1A. Then, we tested miR-9 expression in five HCC cell lines and the normal hepatic cell HL-7702 by quantitative reverse transcription-PCR (qRT-PCR). The miR-9 expression levels in the HCC cell lines were as follows: Hep3B > Huh7 > HepG2 > SNU387 > SNU449 (Figure 1B). Examination of the IC50 of cisplatin on HCC cells revealed an opposite trend compared to that of the miR-9 levels, i.e., SNU449 > SNU387 > HepG2 > Huh7 > Hep3B (IC50(μg/ml): SNU449,4.556; SNU387, 3.104; HepG2, 2.491; Huh7,1.706; Hep3B,1.356) (Figure 1C, Table 1). Therefore, our results indicate that miR-9 expression levels may correlate positively with cisplatin sensitivity in HCC.

To explore the role of miR-9 on cisplatin sensitivity in HCC, we used gain- and loss-of-function approaches in vitro and in vivo. The in vitro experiments showed that, in the presence of cisplatin, miR-9 knockdown HCC cell lines had the best viability compared to the other treatment groups; opposite results were observed in the miR-9 overexpression HCC cell lines (Figure 2A-E, Table 2). In vitro, EdU staining showed that after cisplatin exposure, HCC cells that had been transfected with miR-9 mimic had reduced cell proliferation rates compared with cells transfected with miR-9 inhibitor (Figure 2F-J). The level of miR-9 after transfected with miR-9 mimic, inhibitor or plus with cisplatin for 48h was determined by qRT-PCR (Figure 2K). 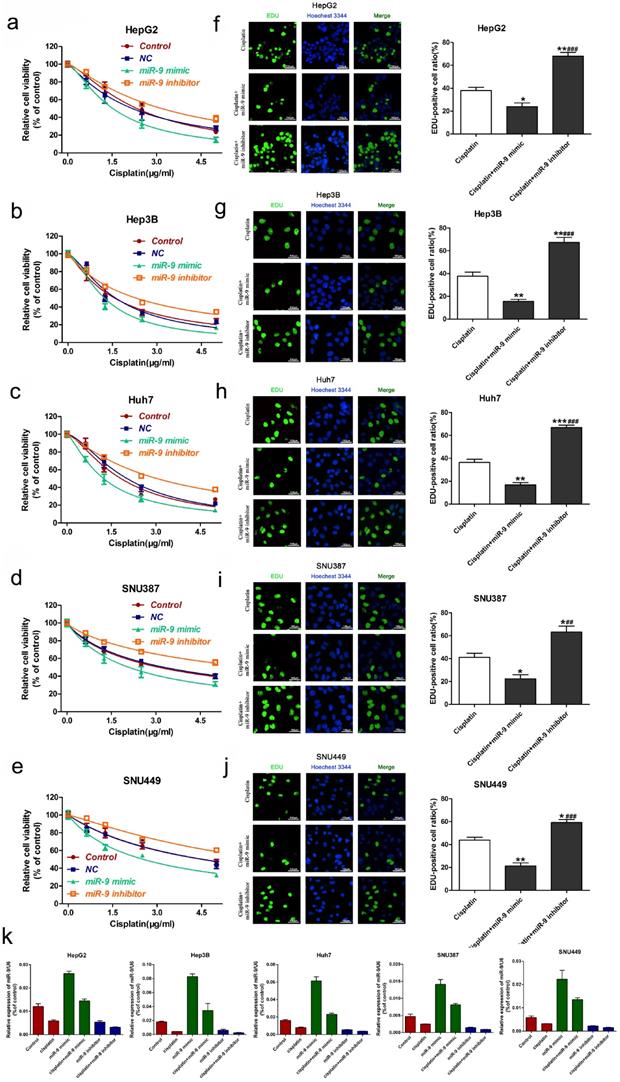 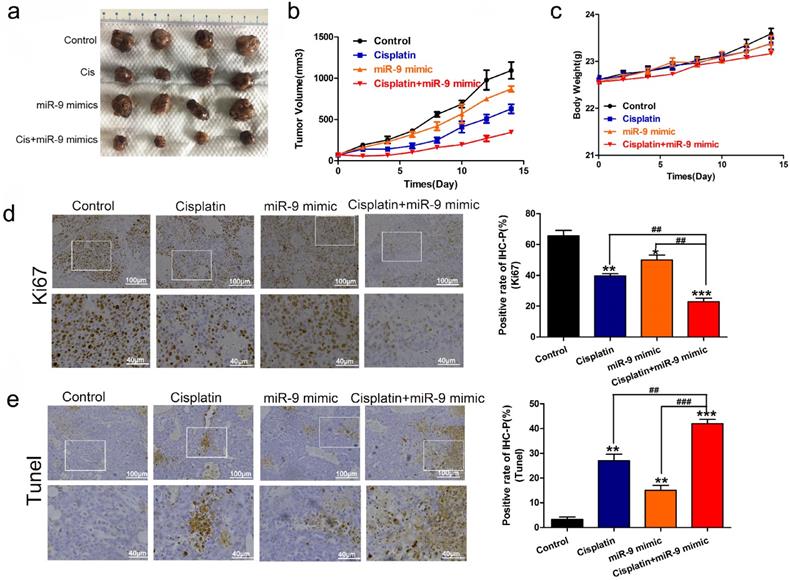 The viability of HCC cells transfected with miR-9 mimic or miR-9 inhibitor combined with different concentrations of cisplatin.

As previously reported, EIF5A2 may be a previous target of miR-9[26, 27].We used the TargetScan Human database to determine the mechanism of miR-9-induced chemosensitivity and its possible target genes. EIF5A2, which has been implicated as an oncogene that enhances chemoresistance in several cancers, harbored a potential miR-9 binding site (Figure 4A). As shown in Figure 4 B, the “seed sequence” of miR-9 matched precisely with the 3'-UTR of EIF5A2. Next we showed evidence that supported the speculation. Obviously, the luciferase activity of wild-type (wt) EIF5A2 3'-UTR was decreased by increased miR-9 and was improved by reduced miR-9, while mutant (mt) EIF5A2 3'-UTR was not influenced (P < 0.05, Figure 4C).Transient transfection of miR-9 mimic in HCC cells significantly reduced EIF5A2 protein expression (Figure 4D). Furthermore, qRT-PCR showed obviously decreased EIF5A2 mRNA in miR-9 overexpression HCC cells compared to miR-9 knockdown HCC cells (Figure 4E-4I). These results suggest that miR-9 regulates EIF5A2 expression in HCC cells.

As EIF5A2 is a target gene of miR-9, we investigated whether EIF5A2 contributes to cisplatin resistance in HCC cells. We examined EIF5A2 protein expression in the HCC cell lines, where the EIF5A2 protein expression trend was SNU449 > SNU387 > HepG2 > Huh7 > Hep3B, representing an opposite trend to that of miR-9 expression (Figure 5A-B). Next, we used EIF5A2 siRNA to study EIF5A2 loss-of-function in HCC cells; western blotting confirmed the EIF5A2 siRNA interference efficiency (Figure 5C). CCK-8 showed that EIF5A2 knockdown HCC cell lines had lower viability compared to the negative control siRNA group. These results suggest that EIF5A2 promotes cisplatin resistance in HCC cells. 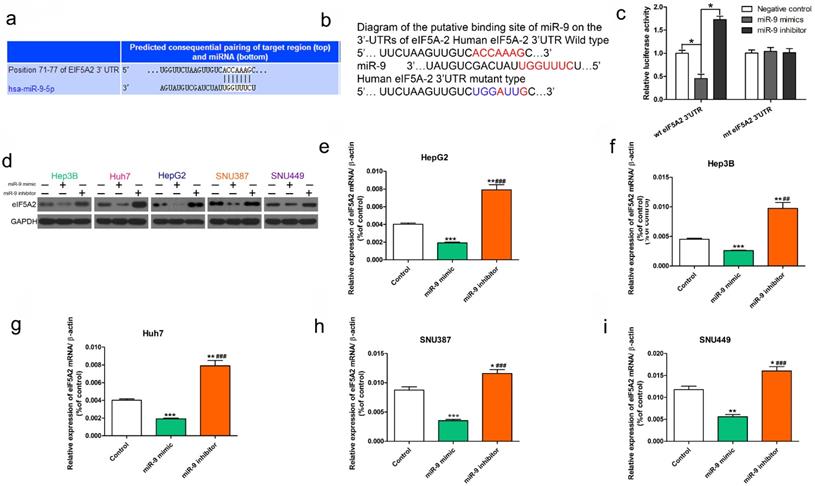 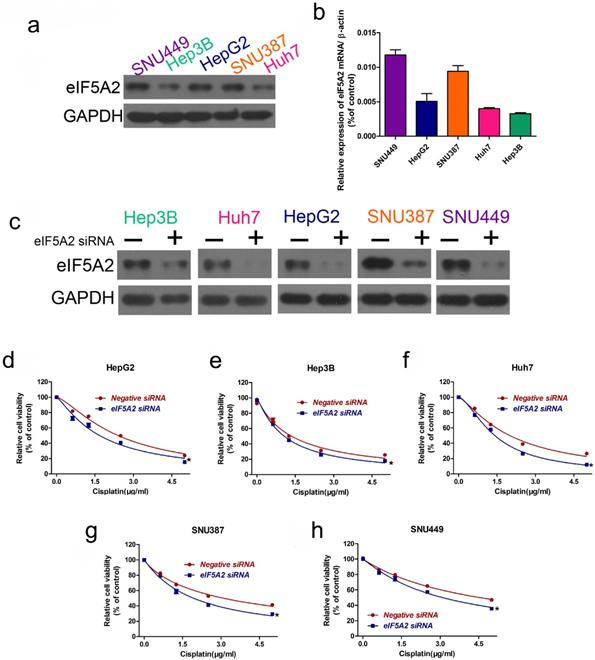 As EMT is one of the key events in tumor cell chemoresistance, we examined the epithelial markers (E-cadherin) and mesenchymal markers (vimentin) with western blotting. miR-9 overexpression signifycantly upregulated E-cadherin and downregulated vimentin, and the miR-9 inhibitor had the opposite effect (Figure 7A). As expected, EIF5A2 knockdown had the same effect on E-cadherin and vimentin expression as miR-9 overexpression (Figure 7B). When HCC cells were co-transfected with EIF5A2 siRNA and miR-9 inhibitor, the expression of E-cadherin and Vimentin showed no difference (Figure 7C). Collectively, our results indicate that miR-9 may regulate cisplatin sensitivity by downregulating EIF5A2 and inhibiting the EMT pathway.

HCC is the fifth most common malignancy worldwide, and long-term survival is poor. Chemoresistance is one of the major obstacles in the chemotherapeutic treatment of HCC [28, 29]. Currently, the mechanisms underlying HCC chemoresistance are largely unknown. Therefore, it is urgent to identify novel mechanisms in patients with HCC who are resistant to chemotherapy. miRNAs are involved in chemoresistance in many cancers [30]. In the present study, we focused on miR-9, which has been indicated as an important miRNA in cancer development. It has been reported that miR-9 could enhance sensitivity to cisplatin of NSLSC through inhibiting EIF5A2 expression[26]. Furthermore, miR-9 could enhance the chemosensitivity to daunorbicin in AML cells via regulating EIF5A2[27]. As an oncogene or a tumor suppressor, MiR-9 also plays an important role in migration and invasion in HCC cells. Accumulated evidence has indicated that over-expression of miR-9-5p could enhance cell migration and invasion while miR-9-3p could inhibit cell migration an invasion in HCC cells[20, 31]. However, in this study, we revealed that miR-9-5p was a suppressor, we had examined the level of miR-9 and found that it was lower in cancer tissue than that in normal tissue and up-regulation of miR-9 could enhance sensitivity to cisplatin in HCC cells. Xue et al had reported that over-expression of miR-9-5p could enhance sensitivity to cetuximab in epithelial phenotype HCC cells[32], which is consistent with our results.

Here, HCC cells with high miR-9 expression had low cell viability under cisplatin treatment. The cell viability of the five HCC cell lines followed a trend opposite to their miR-9 levels. To further explore the effect of miR-9 on cisplatin sensitivity in HCC, we employed gain- and loss-of-function approaches in vitro and in vivo. miR-9 overexpression in HCC cells reduced proliferation and promoted apoptosis in vitro and in vivo, which supports the idea that miR-9 is a potent cisplatin sensitizer in HCC. This result is consistent with that of Sun et al. on ovarian cancer, where miR-9 enhanced sensitivity to cisplatin and poly(ADP-ribose) polymerase (PARP) inhibition [33].

We used TargetScan Human to determine the potential mechanism of miR-9-induced chemosensitivity and its possible target genes, and found that EIF5A2, an oncogene, was in the list. EIF5A2, an essential component of translation elongation, is a novel oncogene and a potential molecular target in human cancer [34, 35]. EIF5A2 upregulation has been reported in many human cancers, such as cervical cancer [36], HCC [37], bladder cancer [38], and gastric cancer [39]. It was recently reported that inhibiting EIF5A2 enhances the chemosensitivity of pancreatic ductal adenocarcinoma cells to gemcitabine [40], non-small cell lung cancer (NSCLC) cells to cetuximab [41], and esophageal squamous cell carcinoma cells to 5-FU [42]. In HCC, EIF5A2 is a target of GC7 (N1-guanyl-1,7-diaminoheptane), and GC7 downregulation of EIF5A2 sensitizes HCC cells to doxorubicin [43, 44]. In the present study, we prove that EIF5A2 is a target gene of miR-9 in HCC, and further prove that EIF5A2 knockdown sensitizes HCC cells to cisplatin. EIF5A2 siRNA transfection confirmed that EIF5A2 knockdown reverses the cell viability increased by miR-9 inhibitor. These results indicate that miR-9 enhances chemosensitivity of HCC cells, at least partially, by downregulating EIF5A2. 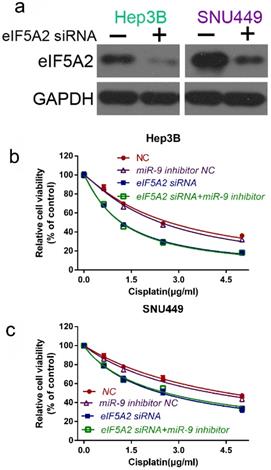 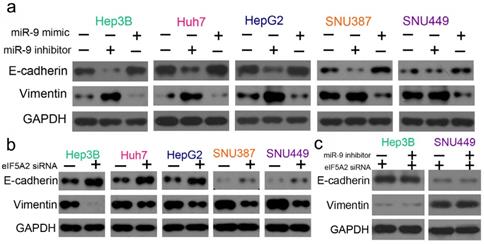 Increasing evidence demonstrates that EMT plays crucial roles in acquired drug resistance in many cancers, including HCC [45]. EIF5A2 and miR-9 have been associated with EMT progression in HCC [20, 46, 47]. However, the underlying relationship among chemosensitivity, EIF5A2, miR-9, and EMT is unknown. Here, we prove that miR-9 overexpression inhibits EMT in HCC by downregulating EIF5A2 expression. The EMT pathway may be involved in miR-9-mediated regulation of cisplatin sensitivity.

In conclusion, we demonstrate that miR-9 overexpression sensitizes HCC cells to cisplatin by inhibiting EIF5A2 and preventing EMT, which sheds light on the mechanisms of miR-9 regulation of HCC chemosensitivity and provides a novel target for improving chemotherapy efficiency in HCC.