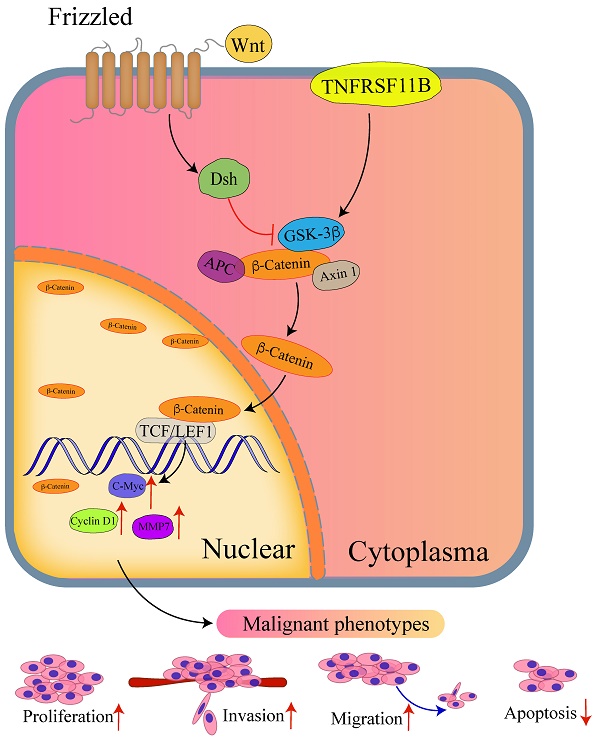 Tumor necrosis factor receptor superfamily member 11B (TNFRSF11B) has been studied to be involved in the development and progression of several human malignancies. However, little is unveiled regarding the complex mechanisms of TNFRSF11B in human gastric cancer (GC). The clinical significance of TNFRSF11B was assessed in 70 and 160 GC tissues using immunohistochemistry method and gene microarray analysis, respectively. The biological function of TNFRSF11B was studied in vitro and in vivo assays. Immunofluorescence assay was used to evaluate the expression of β-catenin in the nucleus. The expression of β-catenin and related protein was determined by Western blot. The interaction between TNFRSF11B and GSK3β was detected by co-immunoprecipitation. We demonstrated that TNFRSF11B was highly expressed in the cytoplasm of GC and associated with the patient poor outcome. Our studies showed that TNFRSF11B in GC cells significantly promoted cell proliferation, migration, invasion in vitro and tumorigenic ability in vitro and in vivo. Meanwhile, TNFRSF11B inhibited GC cell apoptosis. The proportion of nuclear active β-catenin showed positively correlation with TNFRSF11B expression. TNFRSF11B directly combined with GSK-3β upregulating its phosphorylation, and increased expression of β-catenin and its downstream effectors. Collectively, these findings demonstrate that TNFRSF11B promote the aggressive phenotypes of GC cells and activated Wnt/β-catenin signaling. Accordingly, TNFRSF11B had potential as a biomarker and inhibition of TNFRSF11B expression might offer a new therapeutic target for GC patients.