DNA damage signals transducer RING finger protein 8 (RNF8) is involved in maintaining genomic stability by facilitating the repair of DNA double-strand breaks (DSB) via ubiquitin signaling. By analyzing the TCGA database and colon cancer tissue microarrays, we found that the expression level of RNF8 was positively correlated with that of c-Myc in colon cancer, which were closely associated with poor survival of colon cancer patients. Furthermore, overexpressing and knocking down RNF8 increased and decreased the expression of c-Myc in colon cancer cells, respectively. In addition, RNF8 interacted with β-catenin and facilitated its nuclear translocation by conjugating K63 polyubiquitination on it. These observations suggested a de novo role of RNF8 in promoting the progression of colon cancer by inducing β-catenin-mediated c-Myc expression.

Colorectal cancer (CRC) is the fourth most commonly diagnosed and the second leading cause of cancer mortality worldwide [1]. In recent years, new treatments for CRC have been developed, which have improved the overall survival of CRC patients significantly [2-4]. Nevertheless, 50% of CRC patients undergo disease recurrence [5]. Therefore, it is urgent to unravel the underlying molecular mechanisms of CRC oncogenesis and progression to identify novel therapeutic targets.

Overexpression of oncogenes such as MYC is one of the major drivers for the initiation and progression of CRC [6-8]. The MYC family regulates cell survival, apoptosis, proliferation, and differentiation [9-10]. Deletion of MYC rescues the colorectal tumor phenotype of the Apc-deficient mouse model [11], suggesting an important role of MYC in colorectal tumorigenesis. As the most oncogenic protein of the MYC family, c-Myc is universally dysregulated in CRC and associated with a poor prognosis of CRC patients [12-14]. c-Myc acts as a transcription factor regulating a large number of genes to promote cell proliferation [15-17]. The expression of c-Myc is strictly regulated by the Wnt/ β-catenin pathway [18]. Dysregulation of this pathway usually leads to upregulation of c-Myc by promoting accumulation and nuclear translocation of β-catenin, which contributes to CRC oncogenesis and progression [6, 19]. Thus, exploration of the molecular mechanisms regulating c-Myc expression may shed light on improving therapies for CRC patients.

RING finger protein 8 (RNF8), which belongs to the RING finger E3 ligase family, is an essential factor for transducing DNA double-strand breaks (DSB) signaling [20-22]. It has been reported to be highly expressed in breast cancer and positively correlated with the progression of breast cancer by activating the Wnt/β-catenin pathway or enhancing the activity of Twist and estrogen receptor α (ERα) [23-25]. These findings suggest an essential role of RNF8 in the progression of cancer. However, the exact function and mechanism of RNF8 in regulating the progression of CRC remain largely unknown.

In this study, we found a positive correlation between RNF8 and c-Myc in colon cancer tissues. Subsequently, our results showed that RNF8 induced c-Myc expression via binding to β-catenin and facilitating its nuclear translocation by conjugating K63 polyubiquitination onto it. Furthermore, knockdown of RNF8 significantly inhibited the growth of colon cancer cells in vitro and in vivo. These results indicate that RNF8 promotes colon cancer proliferation by upregulating β-catenin-mediated c-Myc expression, and provide a new insight into the mechanism of colon cancer progression.

Cytoplasmic and nuclear fractions were extracted from cells using a Minute™ Cytoplasmic and Nuclear Extraction Kit (Invent Biotechnologies, Shanghai, China), according to the manufacturer's instructions.

Colon cancer cells were co-transfected with Flag-RNF8 and ubiquitin plasmids and treated with 20 μM MG132 (Selleck, S2619) for 30 minutes. The cells were lysed in 100 μl lysis buffer (50 mM Tris-HCl, pH 7.5, 0.5 mM EDTA, 1 mM DTT, 1% SDS, and a protease inhibitor) and incubated at 95°C for 5 minutes. Then, the cells were added with 900 μl Tris-HCl buffer (50 mM, pH 7.5) and sonicated. After centrifugation, the cell lysates were subjected to immunoprecipitation.

For proliferation assay, 3×103 cells per well were cultured in 96-well plates in triplicate. The cell number was then detected using CCK8 (Bimake, B34304) reagent by measuring the absorbance at 450 nm with a microplate reader (TECAN, Switzerland).

Twenty nude mice (BALB/C, 4-weeks-old, female) were purchased from Shenyang Huafukang Biosciences (Shenyang, China). The animal experiments meet the requirements of the Animal Care and Use Committee of China Medical University. The mice were divided into two groups of 10 mice each, and 5×106 HCT116 cells with stable knockdown of RNF8 or control cells were injected subcutaneously. The tumor volume was measured daily using the formula π/6×r12×r2 (r1<r2). After 13 days, the mice were sacrificed and the tumors were isolated, photographed, measured, and subjected to immunohistochemistry. 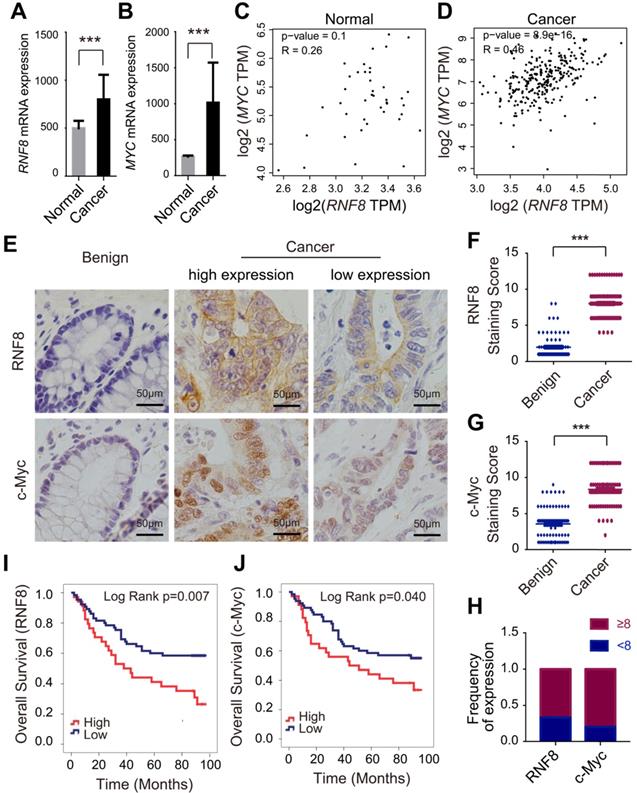 Because previous studies have reported that RNF8 participates in regulation of various genes, which are the targets of Twist and ERα [24-25], we explored whether RNF8 regulated the expression of c-Myc. To begin with, we used the Cancer Cell Line Encyclopedia (CCLE) database [28] to examine RNF8 expression levels in various colon cancer cell lines. We selected HCT116 and SW480 cell lines with relatively high expression of RNF8 and mutant components of the Wnt/β-catenin pathway [29] (Figure S1A). In both HCT116 and SW480 cells, we found that overexpression and knockdown of RNF8 increased and decreased MYC gene transcription, respectively (Figure 2A and 2B, Figure S2A and S2B). The silencing efficacy of the shRNA targeting RNF8 in HCT116 and SW480 cells was shown in Figure S1B and S1C, respectively, and we chose the most efficient one for the experiments. Moreover, the protein level of c-Myc was elevated by overexpressing RNF8 and decreased by silencing RNF8 in HCT116 and SW480 cells, respectively (Figure 2C and 2D, Figure S2C and S2D).

Because our results demonstrated that RNF8 upregulated c-Myc expression via β-catenin, we next investigated the mechanism of this effect. Constitutively activated Wnt/β-catenin pathway is a major driver of colon cancer, and β-catenin accumulation and nuclear translocation are crucial processes in this pathway to induce c-Myc expression leading to colon cancer development [17, 31-34]. When the Wnt/β-catenin pathway is activated, dephosphorylation of β-catenin at serine (S) and threonine (T) residues S33/37 and T41 by GSK3β and S45 by CK1 is critical for transcriptional activation of Wnt target genes [35]. Thus, we examined whether RNF8 influenced the phosphorylation level of β-catenin at these sites. However, overexpression or knockdown of RNF8 in HCT116 and SW480 cells hardly affected the phosphorylation of β-catenin at S33/37/T41 and S45 sites (Figure 3A and 3B, Figure S3A and S2B), nor the protein level of β-catenin (Figure 3C and 3D, Figure S3C and S3D). These results were consistent with the analysis from TCGA (Table S5), indicating that the expression level of RNF8 had no significant correlation with CTNNB1 in colon cancer. 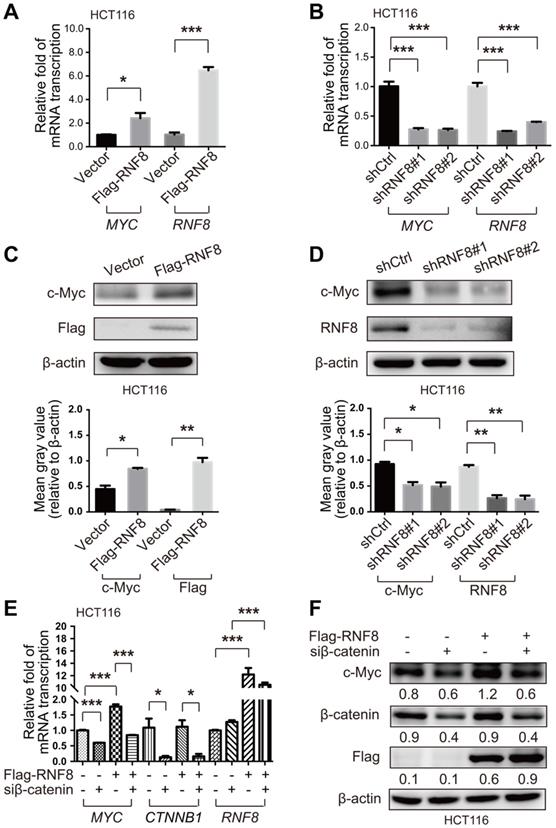 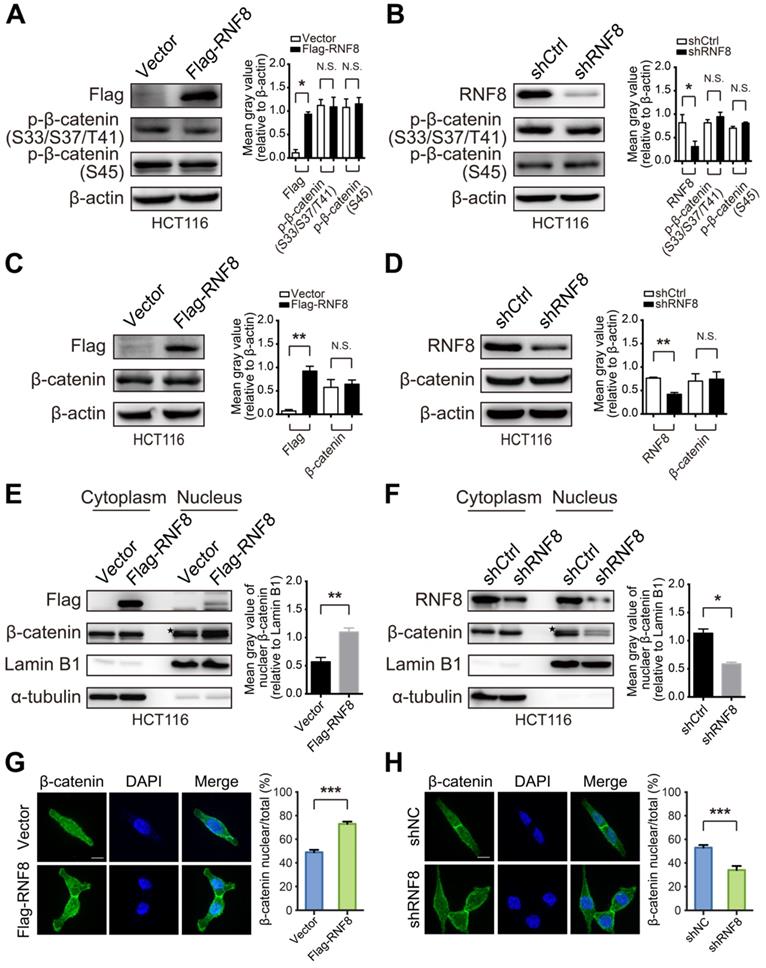 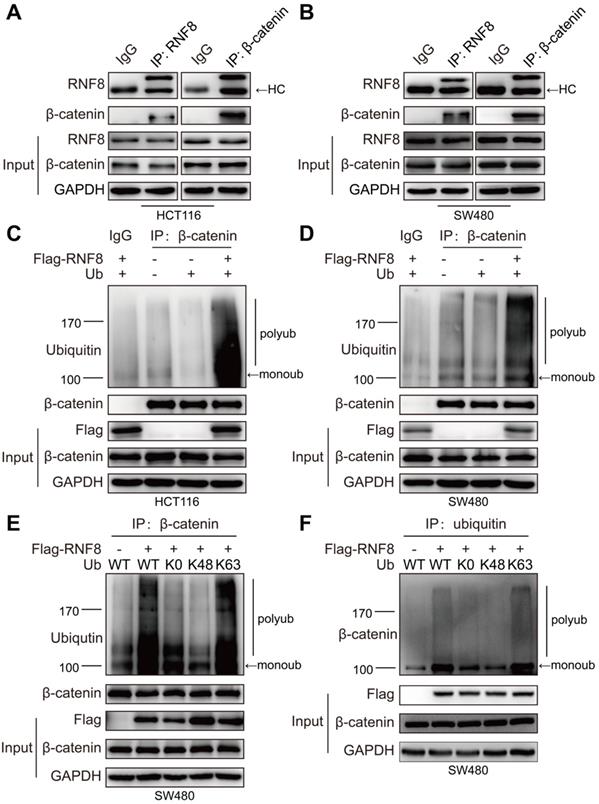 RNF8 is required for the proliferation of colon cancer cells

Recently, RNF8 was reported to participate in breast cancer progression [23-25]. In this study, we found that RNF8 promoted c-Myc expression via β-catenin, and the β-catenin-c-Myc pathway is essential for CRC progression [41-43]. Thus, we investigated whether RNF8 regulated the proliferation of colon cancer cells. HCT116 and SW480 cells with stable silencing of RNF8 were performed for the CCK8 proliferation assay (Figure 5A, Figure S4A) and colony formation assay (Figure 5B, Figure S4B), which demonstrated that silencing RNF8 retarded the growth of colon cancer cells in vitro. However, stable knockdown of RNF8 had no significant effect on the growth of HEK293 cells (Figure S4C), suggesting a specific role of RNF8 in cancer cells.

To further investigate the role of RNF8 in the proliferation of colon cancer cells in vivo, we subcutaneously injected stable RNF8 knockdown and control HCT116 cells into 4-week-old female nude mice. The tumor volume was measured every day after injection (Figure 5C), and the results showed that silencing RNF8 significantly reduced the proliferation rate of HCT116 cells in vivo. Thirteen days later, the tumors were isolated, photographed (Figure 5D) and weighted (Figure 5E), which showed that RNF8 knockdown tumors were apparently smaller and lighter compared with control tumors. These data demonstrated that knockdown of RNF8 dramatically inhibited the proliferation of colon cancer cells in vivo.

Subsequently, we performed immunohistochemistry of the xenograft tumor tissues. The results showed that expression of c-Myc was decreased significantly when RNF8 was knocked down (Figure 5F). These findings were consistent with the above in vitro results, suggesting that RNF8 promoted the proliferation of colon cancer cells by upregulation of c-Myc expression.

The ubiquitin E3 ligase RNF8, which primarily functions in transducing DSB signals by conjugating ubiquitin to histones [22], has been reported to participate in tumorigenesis because RNF8 knockout mice develop various tumors spontaneously [44-45], indicating a negative role of RNF8 in tumorigenesis. However, RNF8 appears to have the opposite effect in tumor progression according to recent studies, because it promoted breast cancer proliferation and metastasis by affecting the Wnt/β-catenin pathway and activating the activity of transcription factors such as Twist and ERα [23-25]. Consequently, because the role of RNF8 in the progression of other cancers remains unclear, it is important to clarify the function and mechanism of RNF8 in regulating the progression of cancer.

Positive correlation between RNF8 and c-Myc in colon cancer

In addition to its function in DSB signaling transduction, RNF8 was firstly identified as a transcription coactivator of RXRα in 2004 [46]. Recently, studies have reported that RNF8 acted as a cofactor of transcription factor Twist or ERα in transcriptional regulating of a broad range of genes [24-25]. Thus, we hypothesized that RNF8 might regulate the transcription of MYC. The results of real-time PCR showed that the transcription level of MYC was increased or decreased apparently when RNF8 was overexpressed or knocked down in colon cancer cells (Figure 2A and 2B, Figure S2A and S2B). Moreover, the protein level of c-Myc exhibited similar alterations in colon cancer cells with overexpression or knockdown of RNF8 (Figure 2C and 2D, Figure S2C and S2D). 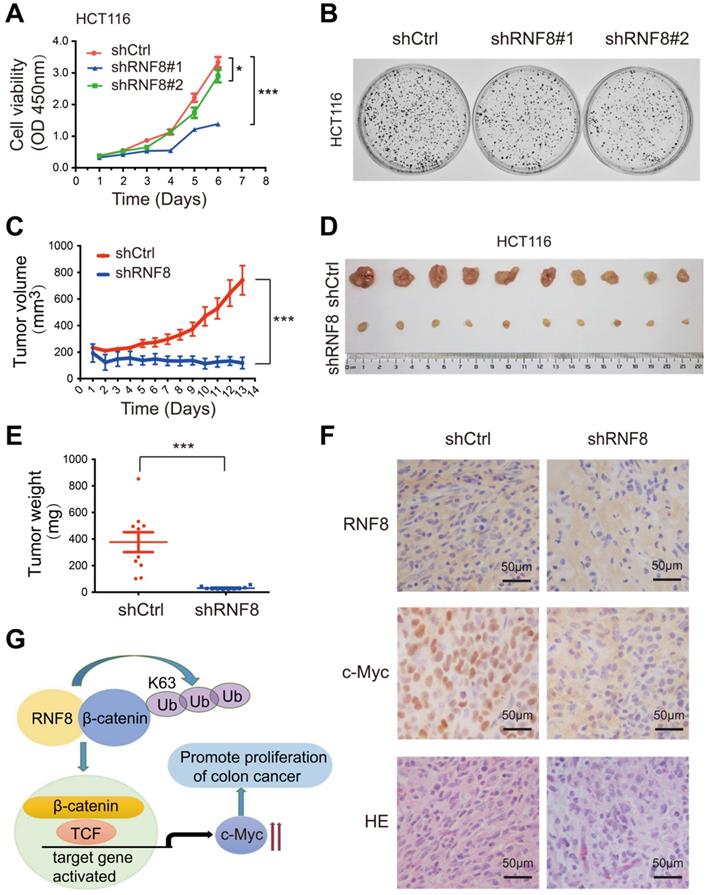 The Wnt/β-catenin pathway is one of the fundamental signaling cascades in development and homeostasis, and mutations in this pathway lead to hereditary disorders and cancers [33]. β-catenin is a critical factor in this pathway and is continually eliminated by the Axin complex in the absence of Wnt. In this process, β-catenin is sequentially phosphorylated by CK1 and GSK3β and subsequently ubiquitinated leading to degradation, which prevents nuclear translocation of β-catenin and the transcription of Wnt target genes [33]. When the pathway is activated by Wnt binding to the Frizzled receptor and coreceptor, β-catenin accumulates in the cytoplasm and then translocates into the nucleus, activating Wnt target genes transcription [33]. Constitutively activated β-catenin signaling is an essential mechanism for the oncogenesis and progression of CRC [47]. Hence, we detected the phosphorylation and protein levels of β-catenin in colon cancer cells with RNF8 overexpression and silencing. Unfortunately, we found no obvious changes in these cells (Figure 3A-D, Figure S3A-D), which was in accordance with the analysis of the correlation of RNF8 and CTNNB1 mRNA expression from TCGA (Table S5). However, this is inconsistent with a previous report of breast cancer [23], which may be due to different cancer cell lines.

RNF8 is required for the proliferation of colon cancer cells

Since our results showed that RNF8 upregulated c-Myc expression by facilitating β-catenin nuclear translocation through K63-linked polyubiquitination, we next examined whether RNF8 affected the proliferation of colon cancer cells. CCK8 proliferation and colony formation assays showed that silencing RNF8 significantly inhibited the growth of colon cancer cells in vitro, but not that of HEK293 cells (Figure 5A and 5B, Figure S4A-C). It was suggested a specific role of RNF8 in cancer cells. Moreover, knockdown of RNF8 obviously retarded the proliferation of HCT116 xenografts in vivo (Figure 5C-E) and reduced the expression of c-Myc in xenograft tissues (Figure 5F).