The Regulatory Effect of SIRT1 on Extracellular Microenvironment Remodeling

The sirtuins family is well known by its unique nicotinamide adenine dinucleotide (NAD+)-dependent deacetylase function. The most-investigated member of the family, Sirtuin 1 (SIRT1), accounts for deacetylating a broad range of transcription factors and coregulators, such as p53, the Forkhead box O (FOXO), and so on. It serves as a pivotal regulator in various intracellular biological processes, including energy metabolism, DNA damage response, genome stability maintenance and tumorigenesis. Although the most attention has been focused on its intracellular functions, the regulatory effect on extracellular microenvironment remodeling of SIRT1 has been recognized by researchers recently. SIRT1 can regulate cell secretion process and participate in glucose metabolism, neuroendocrine function, inflammation and tumorigenesis. Here, we review the advances in the understanding of SIRT1 on remodeling the extracellular microenvironment, which may provide new ideas for pathogenesis investigation and guidance for clinical treatment.

Extracellular microenvironment has been considered as a crucial element that influences cellular proliferation and metabolism [1, 2]. It mediates the communication and interaction between neighboring cells, different tissue cells, and even distinct organs for the insurance of normal functions [3, 4]. Meanwhile, the extracellular microenvironment can be reformed by intracellular proteins through regulating the processes and cargos of cell secretion [5]. As the significant nicotinamide adenine dinucleotide-dependent protein deacetylase, sirtuin 1 (SIRT1) is extensively involved in various cellular processes and metabolism [6, 7]. Our previous work revealed that SIRT1 played important roles in genome stability maintenance [8], DNA damage response [9] and autophagy [10]. We further realize that SIRT1 not only affects intracellular homeostasis, but also participates in the extracellular microenvironment remodeling. In this study, we review the related literatures focusing on SIRT1 function as a cell secretion regulator, hoping to find new ways and targets for future research and clinical treatment.

SIRT1 has got long-term attention and well known for playing a pivotal role in glucose homeostasis and Type 2 Diabetes [11, 12]. One of its functions is to regulate insulin secretion. In pancreatic beta cells, SIRT1 promotes insulin secretion in response to glucose stress by suppressing the expression of uncoupling protein 2 (UCP2) [13-15] (Fig. 1A). As a negative regulator of insulin, increased expression of UCP2 in the pancreatic β-cells results in the decrease of glucose-stimulated insulin secretion (GSIS) leading to pancreatic β-cell dysfunction and development of type-II diabetes [16, 17]. UCP2 is shown to regulate glucose metabolism and insulin secretion through many biological activities, including reducing NADH levels, decreasing ATP production, weakening mitochondrial membrane potential and suppressing generation of superoxide [18-20]. SIRT1 can also enhance insulin secretion of pancreatic β-cells through the hydrolase dimethylarginine dimethylaminohydrolase 2 (DDAH2)/secretagogin pathway [21] (Fig. 1B). SIRT1 boosts DDAH2 expression on the transcriptional level by activating promoter of 5' deletion constructs. The overexpression of DDAH2 induces the upregulation of secretagogin, an EF-hand Ca2+-binding protein which is involved in vesicle secretion [22]. Besides, DDAH2 was reported to have directly interaction with secretagogin [23]. 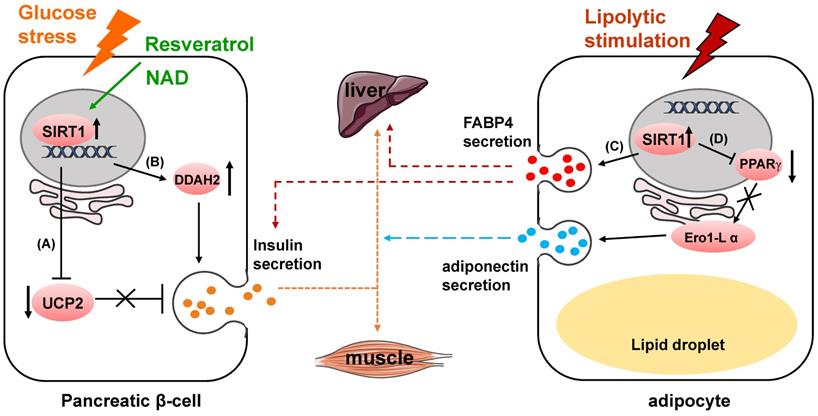 Furthermore, SIRT1 itself can be regulated by in the process of insulin secretion [24]. MicroRNA mir-9 targets and reduces SIRT1 protein level during glucose-dependent insulin secretion. Some protein and compounds can also influence insulin secretion through regulating SIRT1 activity. For instance, Wallerian degeneration slow (WldS), a fusion protein with NAD biosynthesis activity, can increase NAD level, which leads to the enhanced SIRT1 activity to downregulate UCP2 [25, 26]. Resveratrol, currently a most potent natural compound SIRT1 activator, enhances insulin secretion in human islets in response to both glucose and high fat diet [27, 28]. Additionally, resveratrol improves insulin induced NO secretion partly through activating SIRT1 in endothelial cells [29]. This effect might be related to improvement of endothelial cell function in animal models and in humans [30-32].

Various researches have proved that SIRT1 plays a role in regulating lipid metabolism [42]. Among those reports, SIRT1 was found to be a protective factor in the development of atherosclerosis [43-45]. SIRT1 inhibits secretion of thrombosis promoting factors, von Willebrand factor (vWF) and P-selectin, from vascular endothelial cells, thus preventing thrombosis formation [46]. This effect is probably relevant to the regulation of autophagy through SIRT1/FOXO1 pathway. According to Miranda's work, SIRT1 activation reduces hepatic secretion of a serine protease, proprotein convertase subtilisin/kexin type 9 (PCSK9). The secreted mediates lysosomal degradation of hepatic low-density lipoprotein receptor (LDLR) and prevents its internalizing recycle to cell surface [47]. PCSK9 accumulation increases LDLR protein degradation and then enhances LDL-cholesterol plasma clearance, leading to decreased plaque formation [48, 49]. These results are consistent with reduced levels of blood cholesterol and adipokines in SIRT1 transgenic mice [50-52]. 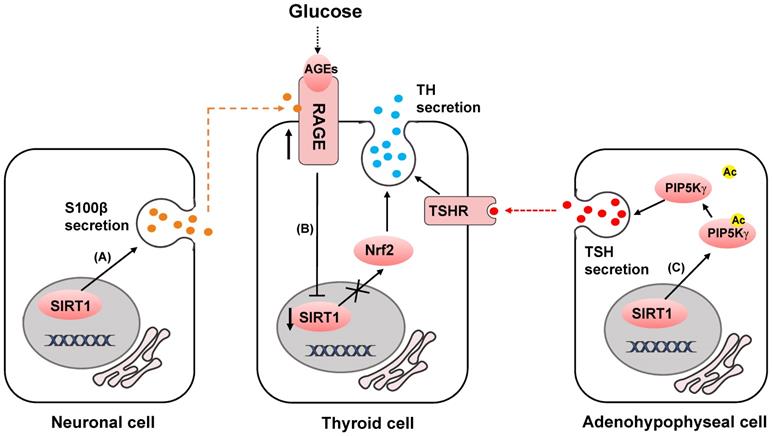 In previous studies, SIRT1 was found to be predominantly expressed in neurons and highly involved in neurodegenerative diseases [61, 62]. SIRT1 is revealed to be neuroprotective in amyloid-β-induced ROS production, DNA damage and oxidative modifications [63, 64]. Qin et al identify in C6 rat glioma cells that enhanced expression of SIRT1 can upregulate the release of a calcium-binding protein S100β [65]. The extracellular S100β functions as cytokines with both neurotrophic and neurotoxic effects and affects the activity of several cell types, such as neurons [66-68], astrocytes [69, 70], and microglia [71, 72], through the surface receptor RAGE [73-76] (Fig. 2A).

Moreover, SIRT1 positively affects the NAD biosynthesis in the hypothalamus by distinctly regulating the release of Nicotinamide phosphoribosyl transferase (NAMPT) in adipose tissue. In this process, SIRT1 predisposes NAMPT to be secreted to the extracellular enzyme pool by deacetylating it at lysine 53 [77].

High mobility group box 1 (HMGB1) was identified as a structural protein of chromatin which functioning in transcription [78, 79]. But when secreted into the extracellular microenvironment, it induces acute and chronic inflammation as a proinflammatory cytokine [80-83]. HMGB1 mediates the recruitment of mononuclear cells [84], the release of cytokines or chemokines [85-87], and the activation of effector T cells and suppression of regulatory T cells[88, 89] (Fig. 3). The exocytosis of HMGB1 is highly dependent on its level of acetylation [90]. SIRT1 attenuates the exocytosis of HMGB1 through deacetylation [91-93]. The secretion of HMGB1 into the extracellular microenvironment can be downregulated by upregulating the activity or expression of SIRT1 [91, 94]. This SIRT1-mediated mechanism has been described in Zeng's research and can prevent non-alcoholic fatty liver disease induced by high fat diet [95]. In response to the stimulation of H2O2, suppression of SIRT1 leads to the upregulation of HMGB1 released from hepatocytes [96]. Intriguingly, secretion of HMGB1 from kidney cells increases in early stage of hemorrhagic shock by downregulation of SIRT1 expression level [97]. In turn, downregulation of circulating HMGB1 by SIRT1 protects liver from ischemic injury [98]. This phenomenon portends that the secretion of HMGB1 changes in different organs and extracellular microenvironment dependent on SIRT1 activity.

SIRT1 is proved to be highly involved in cancer because of its underlying functions in tumorigenesis [99-101], senescence [102, 103], immunity [104, 105] and inflammation [106]. Chronic lymphocytic leukemia creates its suitable microenvironment for survival through the release of aforementioned protein, HMGB1 [107]. Besides, the extracellular S100β, which can be regulated by SIRT1, participates in the recruitment and activity modulation of monocytes in tumor microenvironment [65, 108, 109]. A recent study exhibits that inhibition of SIRT1 by caveolin-1 in senescent fibroblasts promotes the secretion of interleukin 6 (IL-6) and stimulates tumor growth [110].

SIRT1 increases the expression of ATP6V1A to maintain pH level of lysosomes. Down-regulation of SIRT1 promotes MVBs formation and enhancing protein cargos released by exosomes to dissolve the cell matrix of tumor microenvironment. 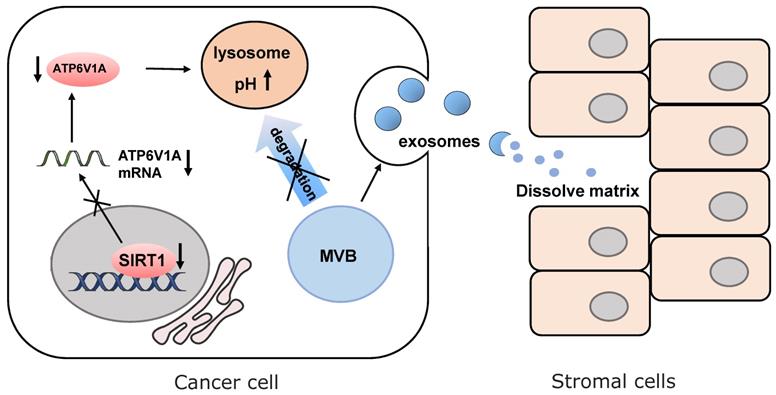 The latest progress discovers that SIRT1 is responsible for the change of microenvironment by regulating the secretion of exosomes [111] (Fig. 4). In breast cancer, loss of SIRT1 enhances the secretion of pro-tumorigenic exosomes and promotes cancer invasion [112]. In triple-negative breast cancer, down-regulating SIRT1 levels decreases the expression of ATPase H+ transporting V1 subunit A (ATP6V1A), a particular subunit of the vacuolar-type H+ ATPase (V-ATPase). It is responsible for acidification of lysosomes and degradation of protein. Disruption of the degradation process leads to the reduction of multi-vesicular bodies (MVBs) and the formation of larger MVBs. Finally, the imbalanced MVB formation promotes enhancing protein cargos released by exosomes [113, 114]. The released cargos dissolve the extracellular matrix of normal cells adjacent to tumor cells and destroy para cancer tissue structures. This SIRT1-dependent mechanism enables cancer cells to create the suitable extracellular microenvironment for the expansion of themselves. In senescent stromal cells, SIRT1-loss also causes impairment of lysosomes acidification and protein degradation. That is why senescent cells presumably prefer to release small extracellular vesicles into the tumor microenvironment, which enhances the aggressiveness and drug resistance of recipient cancer cells mediated by ATP binding cassette subfamily B member 4 (ABCB4) [115].

Accumulating evidences suggest that SIRT1 has wide effects on regulating extracellular microenvironment through cell secretion. Changes of expression or activity of SIRT1 can result in functional variations of the neuroendocrine system, inflammatory and tumor microenvironment through driving proteins, cargos in exocytosis vesicles and exosomes secreting into extracellular microenvironment. The released proteins functions as enzymes, cytokines, neuroendocrine factors and ligands of cell surface receptors. These molecules regulate downstream target cells bringing about different effects. These variations are involved in glucose metabolism, TH/TSH secretion, lipid metabolism, inflammation in thrombosis, tumorigenesis and metastasis.

We should give more concern to the extracellular microenvironment remodeling function of SIRT1 in scientific researches and clinical treatment. Further research on new drug design may focus on its regulatory effect of extracellular mechanisms, targeting SIRT1 activity or the secreted downstream proteins [116, 117].

It is worth noting that the SIRT1 dependent HMGB1 secretion in kidney and liver shows different alterations in ischemic injury [97, 98]. This prompts that SIRT1-dependent extracellular microenvironment regulation may be variant in different organs and cause opposite results. Thus, in using drugs targeted for SIRT1 in clinical treatment or assessing the medical effects, the specific extracellular effects should be taken into consideration.

XS and LC designed and conceived the general idea and context of this review. ZW, TZ and XS wrote and integrated all sections. QG, HX and WG contributed to the “SIRT1 and tumor microenvironment” section. FY, YG, XL and YF relevant references of this manuscript. All the authors read and approved the final manuscript.

38. Trujillo ME, Scherer PE. Adiponectin-journey from an adipocyte secretory protein to biomarker of the metabolic syndrome. J Intern Med. 2005;257:167-75

49. Osono Y, Woollett LA, Herz J, Dietschy JM. Role of the low density lipoprotein receptor in the flux of cholesterol through the plasma and across the tissues of the mouse. J Clin Invest. 1995;95:1124-32