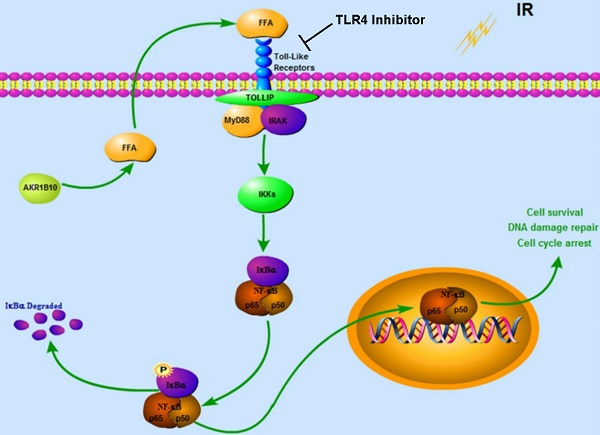 Nasopharyngeal carcinoma (NPC) is one kind of human head and neck cancers with high incidence in Southern China, Southeast Asia and North Africa. In spite of great innovations in radiation and chemotherapy treatments, the 5-year survival rate is not satisfactory. One of the main reasons is resistance to radiotherapy which leads to therapy failure and recurrence of NPC. The mechanism underlying remains to be fully elucidated. Aldo-keto reductase B10 (AKR1B10) plays a role in the formation and development of carcinomas. However, its role in resistance to radiotherapy of NPC is not clear. In this research, the relationships between AKR1B10 expression and the treatment effect of NPC patients, NPC cell survival, cell apoptosis, and DNA damage repair, as well as the effect and mechanism of AKR1B10 expression on NPC radioresistance were explored. A total of 58 paraffin tissues of NPC patients received radiotherapy were collected including 30 patients with radiosensitivity and 28 patients with radioresistance. The relationships between AKR1B10 expression and the treatment effect as well as clinical characteristics were analyzed by immuno-histochemical experiments, and the roles of AKR1B10 in cell survival, apoptosis and DNA damage repair were detected using the AKR1B10 overexpressed cell models. Furthermore the mechanism of AKR1B10 in NPC radioresistance was explored. Finally, the radioresistance effect of AKR1B10 expression was evaluated by the tumor xenograft model of nude mice and the method of radiotherapy. The results showed AKR1B10 expression level was correlated with radiotherapy resistance, and AKR1B10 overexpression promoted proliferation of NPC cells, reduced apoptosis and decreased cellular DNA damage after radiotherapy. The probable molecular mechanism is that AKR1B10 expression activated FFA/TLR4/NF-κB axis in NPC cells. This was validated by using the TLR4 inhibitor TAK242 to treat NPC cells with AKR1B10 expression, which reduced the phosphorylation of NF-κB. This study suggests that AKR1B10 can induce radiotherapy resistance and promote cell survival via FFA/TLR4/NF-κB axis in NPC, which may provide a novel target to fight against radiotherapy resistance of NPC.