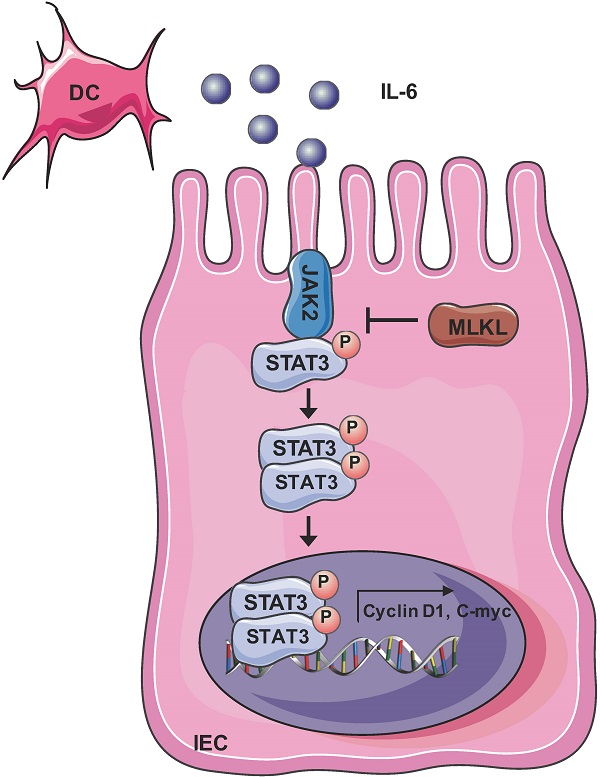 Necroptosis is caspase-independent necrosis that requires the receptor-interacting protein kinase 1 (RIPK1) protein and RIPK3. RIPK1 and RIPK3 interacts via the RIP homotypic interaction motifs (RHIMs) and facilitates the formation of amyloid signaling complex RIPK1-RIPK3 necrosome during necroptosis. MLKL, an important downstream mediator, is activated by RIPK3 and then oligomers to disrupt the membrane integrity, leading to necroptotic cell death [5-7]. Recent studies have shown that multiple key mediators of necroptosis are involved in the progression of tumors [8-9]. Ripk3-deficient mice are susceptible to intestinal tumorigenesis [10-11]. Notably, reduced MLKL expression in tumors is significantly correlated with poor overall survival [12]. Recently, we reported that loss of MLKL accelerated colitis-associated tumorigenesis [13]. However, the precise mechanisms and signaling pathway by which MLKL participates in intestinal tumorigenesis remain unclear. Notably, colitis-associated tumorigenesis represents only 1% of colorectal cancer, and sporadic intestinal tumors are more prevalent [14]. Thus, it is necessary to elucidate the role and the underlying mechanisms of MLKL in sporadic intestinal tumorigenesis.

Signal transducer and activator of transcription 3 (STAT3) as a transcription factor that regulates a large number of physiological and pathological cellular processes [15-18]. Hyperactivation of STAT3 plays an important role in numerous malignant tumors [19-20]. Accumulating evidences have reported that persistent activation of STAT3 promotes colorectal cancer progression [18, 20]. Interleukin-6 (IL-6), a prominent member of the IL-6 family of cytokines, forms a complex with signaling receptors [21]. IL-6 binds to IL-6Rα and forms IL-6-IL-6Rα complexes, subsequently interacts with the membrane-associated gp130 subunit, leading to the phosphorylation of Janus kinase 2 (JAK2) [22]. JAK2 activation promotes the phosphorylation, nuclear translocation, and transcriptional activation of STAT3 [23].

In the present study, we revealed that loss of MLKL increased the susceptibility to intestinal regeneration and tumorigenesis through hyperactivation of IL-6/JAK2/STAT3 signaling. Notably, anti-IL-6R antibody therapy effectively suppressed intestinal tumorigenesis and STAT3 activation in Apcmin/+Mlkl-/- mice. We further found that reduced MLKL expression was correlated with poor prognosis and STAT3 hyperactivation in colorectal tumors. Thus, our findings emphasized that loss of MLKL in intestinal tumors exhibited aggressive disease.

8-week-old mice were injected intraperitoneally with azoxymethane (AOM, 10 mg/kg). After 5 days, mice were treated 2.5% (m/v) dextran sodium sulfate (DSS) in normal drinking water for 7 days, and then administrated normal water for 14 days. The DSS-normal water treatment cycle was repeated three times. At the third cycle on day 80, the mice were euthanized and intestinal tumors were collected for further analysis.

The scoring of stool consistency and occult blood was performed as previously described [26]. The disease activity index (DAI) was determined based on the combined score.

Whole-body irradiation (WBI) was performed according to published protocol [28]. Eight-week-old mice (n=5 per groups) were subjected to 10-Gy WBI. At 3 and 5 days, the intestinal was subjected to H&E staining, and the regenerating villi length was analyzed in 10 fields per mouse. The intestinal tissues were collected for further analysis.

Intestinal tissues were obtained and isolated RNA from 6-week-old Apcmin/+ and Apcmin/+Mlkl-/- mice. The libraries of mRNA were conducted in Illumina HiSeq X-ten system (Shanghai Bohao Biotechnology). The raw reads were filtered and mapped to the genome by Seqtk and TopHat, respectively [29]. Fragments gene were reassembled using HTSeq [30-31], and significant differentially expressed genes (DEGs) were clarified based on False Discovery Rate (FDR) (Q< 0.05) and fold-change >2 [32].

Intestinal tissues were collected and homogenized in TRIzol reagent (Life Technologies) using a Mini-Rotor (Thermo Scientific). The transcript levels of genes were measured by qRT-PCR analysis.

Intestinal tissue for the analysis of cytokine production

The intestinal tissues were homogenized and lysed. The lysates were centrifuged and the protein concentration was measured by ELISA (eBioscience) [33].

Isolation of intestinal epithelial cells and lamina propria lymphocytes was performed as previously described [34]. Intestines were cleared and then cut into pieces. The IECs were collected following shaking after incubation in cold PBS with 3 mM EDTA/1.5 mM DTT. The remaining tissues were further digested by collagenase type XI (Sigma) and DNase I (Sigma) at 37°C for 1 h, and the LPLs were isolated from the supernatants by Percoll. For IL-6 stimulation, intestinal tissues were digested by collagenase type I (Sigma) and Dispase II (Sigma) for 2 h. Cells were plated into 6-well plates coated with type I collagen (Invitrogen) overnight after washing at least three times.

4-week-old Apcmin/+ and Apcmin/+Mlkl-/- mice were intraperitoneal injected with 4 mg/kg tocilizumab (#A2012, Selleckchem; Houston, TX, USA) weekly. After 10 weeks of treatment, mice were euthanized, and the intestinal tumors were collected for further analysis.

Tissue microarrays data on 98 colorectal cancer samples and 79 adjacent samples were obtained from (Shanghai Outdo Biotech Co., Ltd). An anti-MLKL antibody (#ab184718, Abcam; 1:100) was used to detect the expression of MLKL in the immunohistochemical assays. The samples were scanned to obtain high-resolution digital images. The expression of MLKL was scored and quantified by pathologists. The quantified multiplicative index was determined as follows: 0 to 3: the average staining intensity; 0 to 4: extent of staining in the scores. The low MLKL staining indexes ranged from 0 to 4, and the higher MLKL staining indexes ranged from 4 to 12. Above experiments was approved by the ethics committee of Hubei University of Medicine (Hubei, China) (approval no. 2019-TH-027). 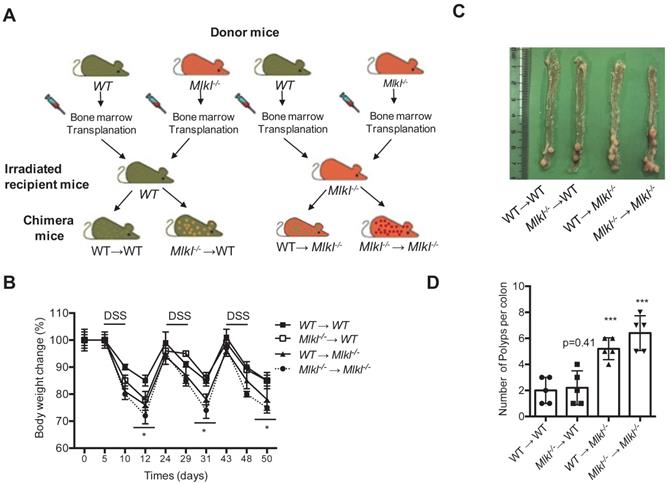 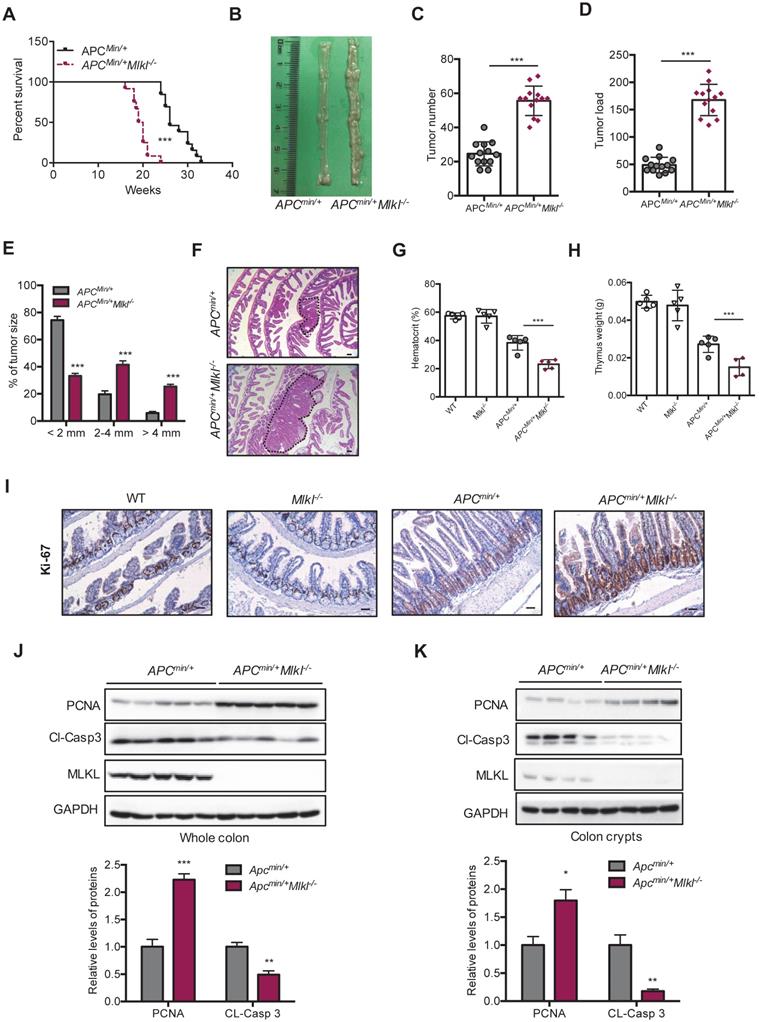 Loss of MLKL enhances the activation of STAT3 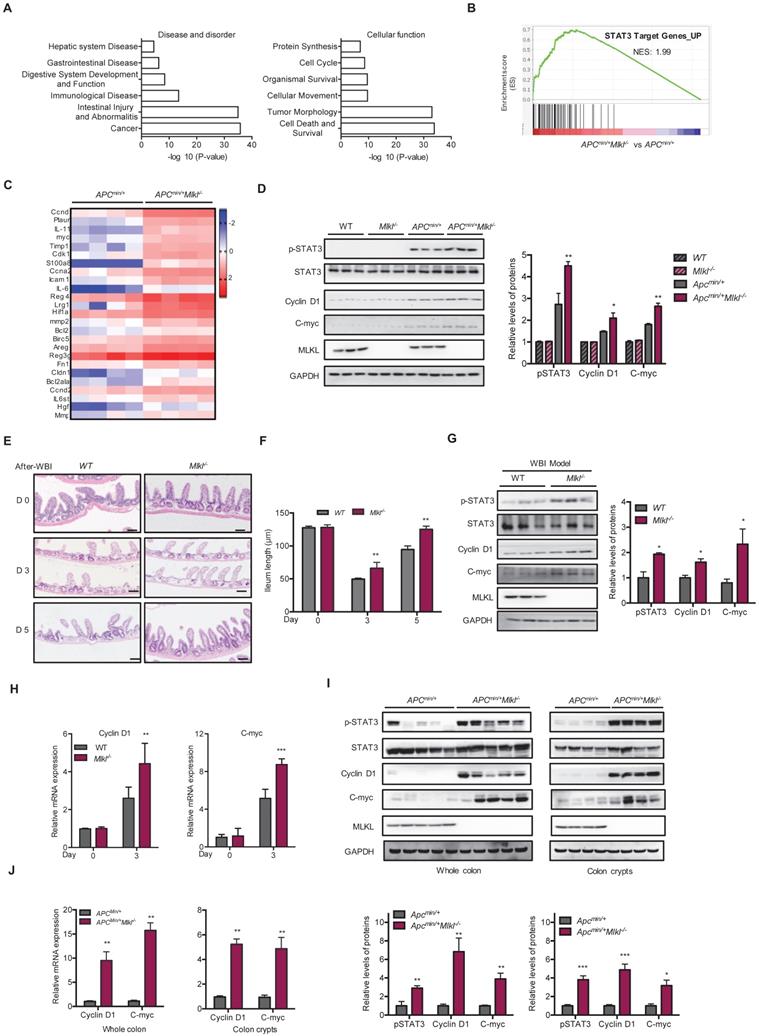 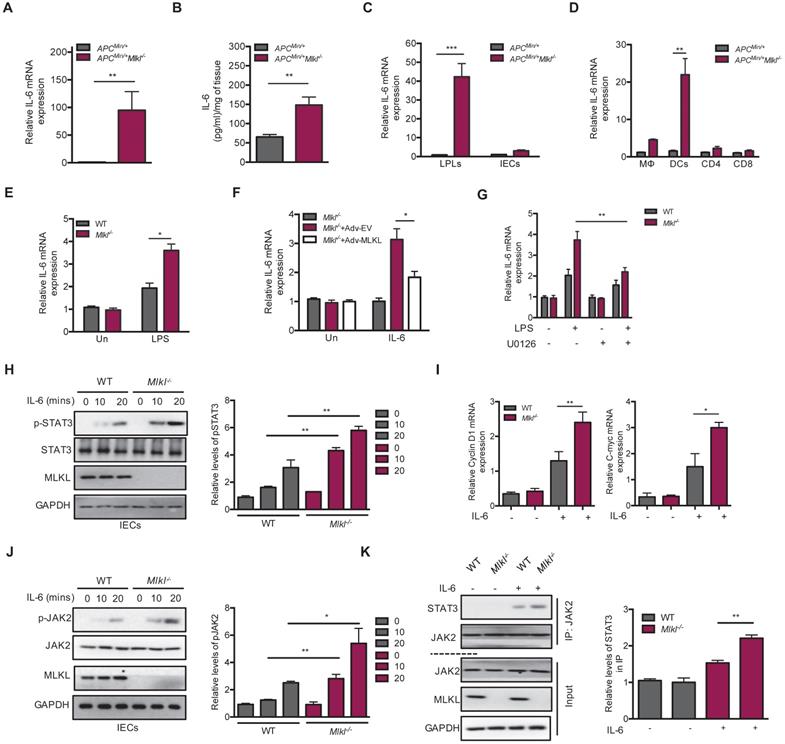 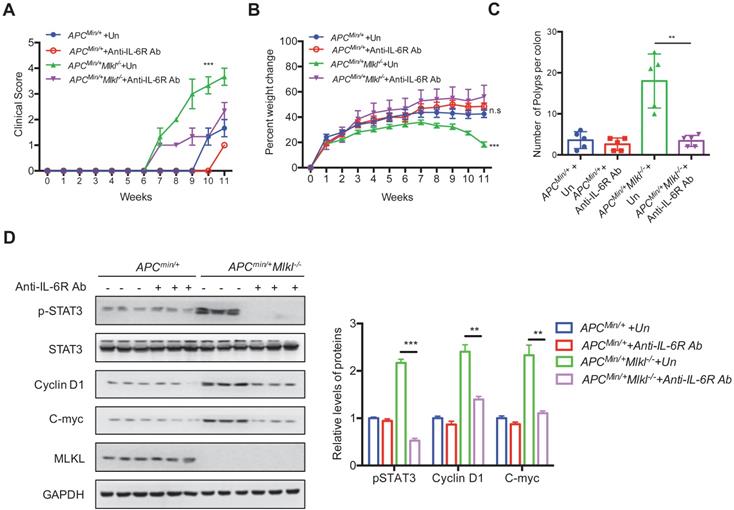 Our previous study revealed that MLKL deficiency promoted inflammatory responses via activating of ERK signaling in dendritic cells by [13]. We thus explored whether dendritic cells produced IL-6 in vitro and found that the level of IL-6 was higher in LPS-stimulated Mlkl-/- bone marrow-derived dendritic cells (BMDCs) (Figure 4E). In contrast, MLKL overexpression partially decreased LPS-induced IL-6 expression in the Mlkl-/- BMDCs (Figure 4F). To address the role of MEK/ERK activation in IL-6 production in Mlkl-/- BMDCs, the MEK/ERK inhibitor U0126 was used. U0126 blocked the LPS-induced IL-6 expression in the Mlkl-/- BMDCs (Figure 4G). Together, these data suggest that IL-6 is overproduced in MLKL-deficient dendritic cells through the activation of ERK signaling.

To dissect IL-6-mediated hyperactivation of STAT3 in Mlkl-/- epithelial cells, we isolated primary WT and Mlkl-/- IECs and stimulated them with extracellular IL-6. The results showed that the levels of p-STAT3 were higher in the Mlkl-/- IECs than in the WT IECs following treatment with IL-6 (Figure 4H). Similarly, higher expression levels of the Cyclin D1 and C-myc were observed in Mlkl-/- IECs (Figure 4I). Moreover, the IL-6-induced increase in pSTAT3 in the context of knocked down MLKL expression was also found in colorectal carcinoma HT-29 cells (Figure S4). Accumulating evidence suggests that phosphorylation and activation of JAK2 play a critical role in IL-6/STAT3 activation [23]. To explore whether MLKL interfered with the activation of JAK2, we assessed the levels of JAK2 phosphorylation in the Mlkl-/- and WT IECs following treatment with IL-6. As shown in Figure 4J, MLKL deficiency increased IL-6-induced JAK2 phosphorylation. Of note, co-immunoprecipitation experiments revealed that the interaction JAK2 and STAT3 was increased in Mlkl-/- IECs compared to WT IECs (Figure 4K). These data together indicate that MLKL deficiency promotes intestinal tumorigenesis through activation of the IL-6/JAK2/STAT3 axis.

The levels of MLKL has prognostic implications in colorectal cancer 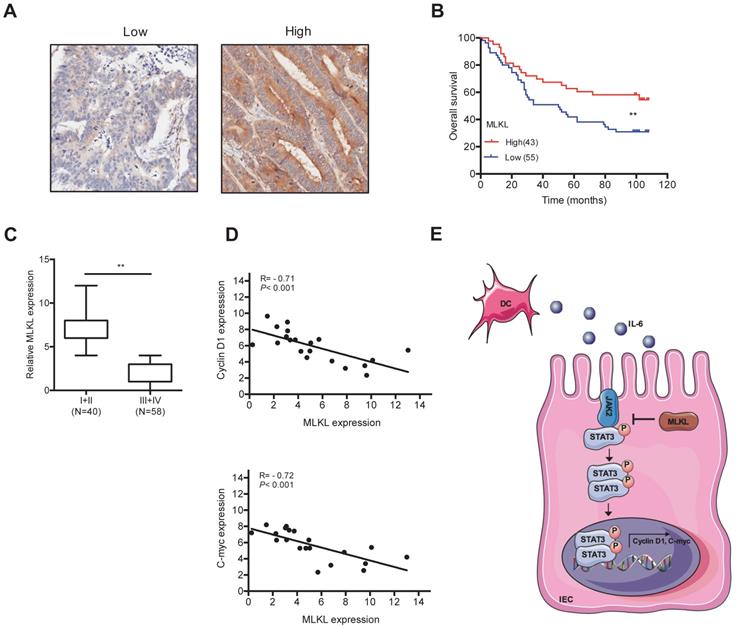 In this study, we showed that loss of MLKL activated the STAT3 signaling pathway to accelerate intestinal regeneration and tumorigenesis. Mechanismly, we found that loss of MLKL increased the phosphorylation of JAK2 and promoted the association of JAK2 with STAT3, leading to hyperactivation of STAT3. Furthermore, IL-6 was upregulated in MLKL-deficient dendritic cells via increased ERK activation. In summary, MLKL exhibits a suppressive effect in the progression of intestinal tumors by regulating the IL-6/JAK2/STAT3 axis (Figure 6E).

MLKL is a major necroptosis regulatory protein that is widely expressed in tissues and organs [6, 36-37]. Increasing evidences suggest that MLKL is involved in pathophysiological conditions, including liver injury, insulin resistance and T2D, cholestasis, and hepatitis [43-46]. Experimental studies demonstrate that MLKL protects mice from against mucosal infection and promotes mucosal repair [13, 47]. Several recent reports have indicated that the prognostic value of MLKL protein expression in multiple malignant tumors [8-9]. We previously reported that the loss of MLKL led to increased susceptibility to colitis-associated tumorigenesis [13]. Herein, we demonstrated that loss of MLKL promoted intestinal tumor progression and increased tumor burden. Our results highlighted that the loss of MLKL activated the STAT3 signaling pathway. Moreover, in the absence of MLKL, high levels of phosphorylated STAT3 were found in intestinal regeneration and tumorigenesis. Sustained STAT3 activation contributed to tumor progression, aberrant JAK2/STAT3 has been detected in a variety of tumor types, suggesting that STAT3 exhibits promise as a drug target for cancer therapeutics [48]. We found that loss of MLKL strengthened the association of JAK2 with STAT3, thereby promoting STAT3 phosphorylation and intestinal tumorigenesis. Our study provides new insights into the role of MLKL serves as a negative regulator in intestinal tumorigenesis through suppressing STAT3 activation.

Several recent reports indicated that the lower levels of MLKL were correlated with poor overall survival in malignant tumors [12, 49-52]. Notably, we observed that reduced MLKL expression in patients with colorectal tumors was correlated with high histological grade and decreased overall survival. Furthermore, we saw that there was a negative relationship between MLKL and the STAT3 target genes expression in colorectal tumors. In agreement, we also found that the size of tumors in the Apcmin/+Mlkl-/- mice were larger than those in the Apcmin/+ mice. These data suggested that MLKL plays a tumor-suppressive role during intestinal tumorigenesis.

IL-6 forms a complex with the IL-6 receptor, leading to persistent activation of STAT3 [53]. The levels of IL-6 are dramatically increased in serum and tumor samples of humans and mice with colorectal cancer, and high IL-6 levels in colorectal cancers are found to correlate with poor prognosis [54-55]. IL-6 promotes the survival of colon carcinoma cells in vitro; however blocking IL-6 signal prevents tumor growth [56-57]. Mlkl-/- mice exhibited massive inflammatory responses and exhibited high IL-6 expression during colitis and colitis-associated tumorigenesis [13]. Herein, we found that IL-6 was elevated in the Apcmin/+Mlkl-/- intestine tumors. Further experiments demonstrated that immune cells, especially dendritic cells, were the main IL-6-producing cells in the Apcmin/+Mlkl-/- intestines. Interestingly, the activation of ERK pathway promoted IL-6 expression in Mlkl-/- dendritic cells, indicating that MLKL deficiency induces IL-6 production in dendritic cells by activating ERK. However, we cannot exclude the possibility that MLKL is involved in other cell types. The contribution of the cell-specific function of MLKL to the suppression of intestinal tumors needs to be further investigated using MLKL conditional knockout mice in future studies.

In summary, our data reveal that MLKL exhibit a suppressive effect during intestinal tumorigenesis via suppressing IL-6/STAT3 signaling pathway. Our results also highlight that interfering with IL-6/STAT3 axis could be a better therapeutic option for intestinal tumor patients with low MLKL expression.