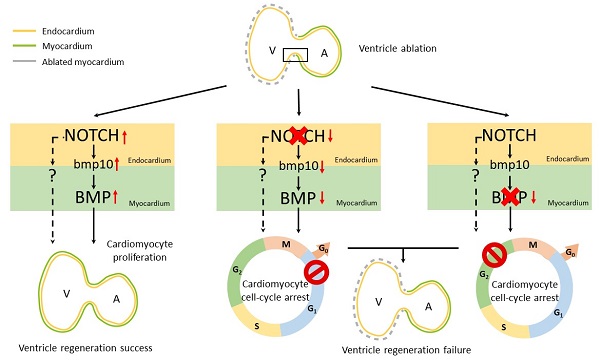 Myocardial infarction (MI) is a leading cause of death worldwide [1, 2]. In adult mammals, the heart, as one of the least regenerative organs, replaces the infarcted myocardium with noncontractile scar tissue [3]. On the contrast, zebrafish are capable to completely regenerate the injured hearts [4-6]. New cardiomyocytes have been shown to arise from proliferation of pre-existing cardiomyocytes through genetic fate-mapping experiments [7, 8]. Though natural cardiomyocyte turnover rate is low in adult humans [9, 10], accelerating such process after acute insult is therapeutically valuable. Thus, utilizing cellular and genetic factors that stimulate cardiomyocyte proliferation may provide viable solutions for promoting human cardiac regeneration.

Zebrafish cardiac regeneration involves multiple signaling pathways [11-13]. BMP signaling is vital for vertebrate cardiovascular development [14, 15], and its function in cardiac injury and repair has become more appreciated. Since inhibitory effects of BMP2 on fibroblast function have been reported [16], exogenous BMP2 reduced the size of infarcted tissue by diminishing apoptotic cardiomyocytes in the border zone in a mouse permanent coronary occlusion model [17]. While BMP4 enhances apoptosis and hypertrophy of cultured mammalian cardiomyocytes [18], BMP7 signaling attenuates myocardial fibrosis by inhibiting TGF-β responses in a rat MI model [19]. BMP10 has been demonstrated to enhance inflammation activity after MI and exogenous BMP10 results in cardiomyocyte cell-cycle re-entry [20]. Thus, BMP signaling has been suggested as a good candidate pathway for modulating cardiac regeneration [21], but its role in cardiomyocyte proliferation requires further investigation. 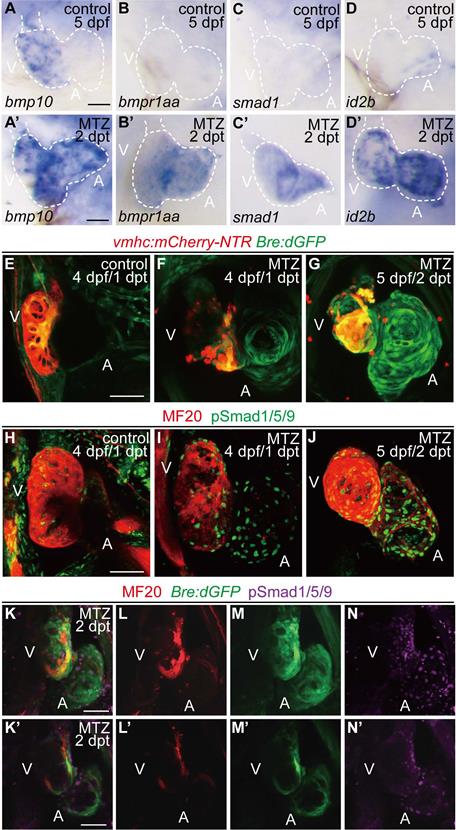 Recent research suggested that BMP signaling activation was an injury response in adult zebrafish hearts [21]. To investigate the role of BMP signaling in the larval ventricle regeneration model, we treated the ventricle-specific genetic ablation line Tg(vmhc:mCherry-NTR) with metronidazole (MTZ) at 3 days post fertilization (dpf) [6]. Whole-mount in situ hybridization (WISH) staining revealed that gene expressions of several BMP signaling components were dramatically increased in ablated hearts compared to that in control hearts at 5 dpf/ 2 days post MTZ-treatment (dpt) (Fig. 1A-D'). BMP ligand bmp10 was weakly expressed in the ventricle of control hearts, probably due to the trabeculae formation at this stage. After ablation, bmp10 expression was strongly induced, especially in the atrium (Fig. 1A, A'). Expression of BMP receptor bmpr1aa and signal transducer smad1 was also up-regulated in ablated hearts, while expression of BMP signaling effector id2b showed a much dramatic increment after ablation (Fig. 1B-D').

To visualize the transient activation of BMP signaling in regenerating hearts, we used a reporter line Tg(Bre:dGFP) which expressed destabilized GFP in BMP-activated cells [30, 31]. Control Tg(vmhc:mCherry-NTR; Bre:dGFP) larvae displayed weak GFP signal in the ventricle at 4 dpf, besides other extracardiac signals. After ventricle injury, BMP signaling was activated in the ablated heart, mainly in the atrium, at 1 dpt. The signal intensity was gradually enhanced in the atrium and extended to the ventricle at 2 dpt (Fig. 1E-G). The activation of BMP signaling during ventricle regeneration was also confirmed by immunofluorescence staining of another marker, phosphorylation of Smad1/5/9 (pSmad1/5/9), which showed a similar pattern as Bre:dGFP (Fig. 1H-J). To further validate these results, we also performed immunostaining of pSmad1/5/9 in Tg(vmhc:mCherry-NTR; Bre:dGFP) larvae. The results suggested that BMP signaling was strongly activated in myocardium during ventricle regeneration, while a weaker epicardial BMP signal could be detected occasionally (Fig. 1K-N'). Overall, our results confirmed that BMP signaling was activated during larval ventricle regeneration. 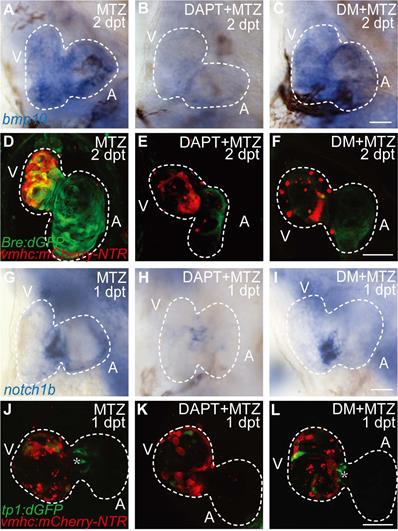 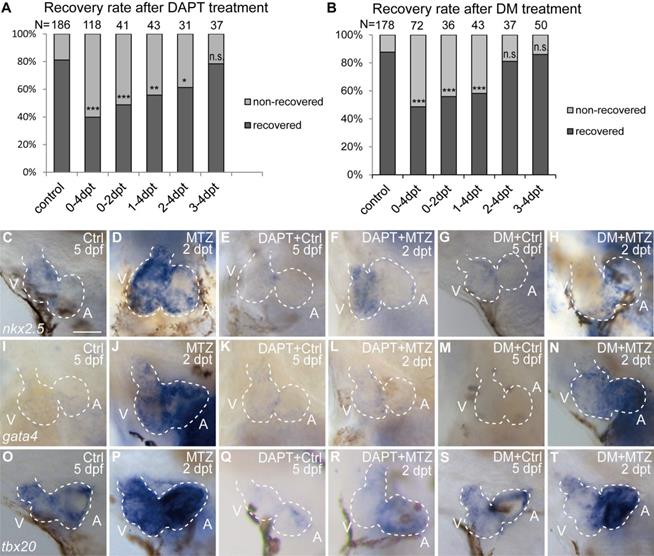 FUCCI as a cardiomyocyte proliferation indicator during ventricle regeneration

FUCCI as a cardiomyocyte proliferation indicator during ventricle regeneration. (A-G) Confocal stack projections of Tg(vmhc:mCherry-NTR; myl7:mAG-zGeminin) hearts showed pattern of zGem+ CMs at 3 dpf/0 hpt, which are in the S, G2 and M phases of the cell-cycle (A). Numbers of zGem+ CMs dramatically increased in the atrium of ablated hearts (E-G) compared to control hearts (B-D). (H, I) Quantification of zGem+ CM numbers in the whole heart (H) or in the atrium only (I) of control and ablated groups at 0, 12, 36 and 60 hpt. Mean + SD, N=8-15 for each time point, Student's t-test, **, P <0.01, ***, P < 0.001. (J) Time-lapse images of Tg(myl7:mAG-zGeminin) hearts showed the dynamic pattern of zGem+ CMs during 42-46 hpt. White arrows point to a CM which lost zGem+ signal after division, while orange arrows point to a CM with newly appeared zGem+ signal. Scale bars, (A-G) 50 µm, (J) 20 µm. dpf, days post fertilization; hpt, hours post MTZ treatment; A, atrium; V, ventricle; CM, cardiomyocyte. Dashed lines outline the hearts. 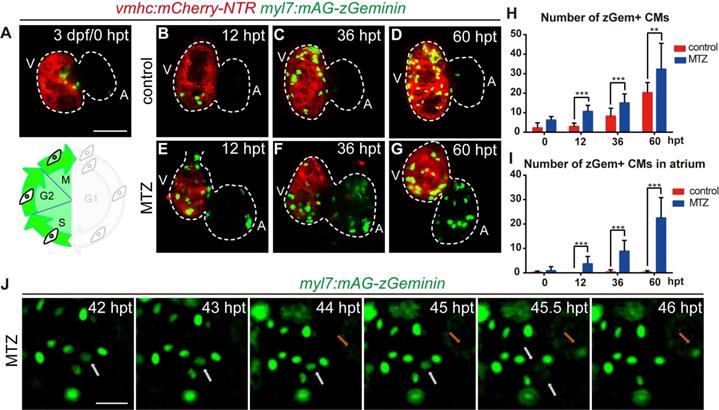 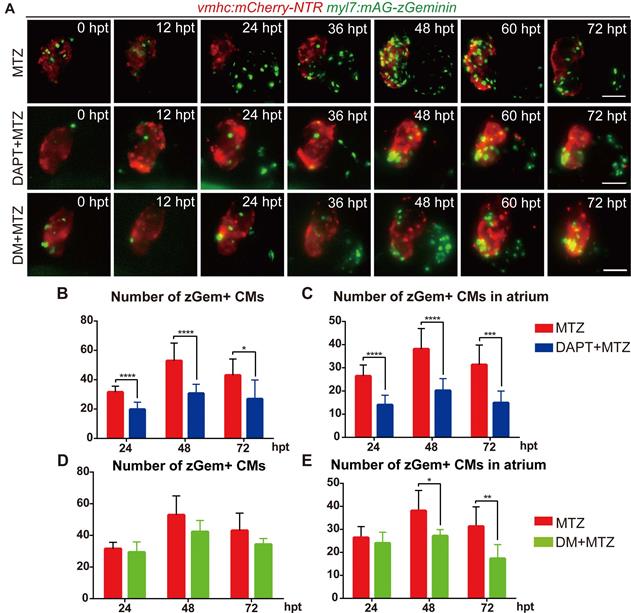 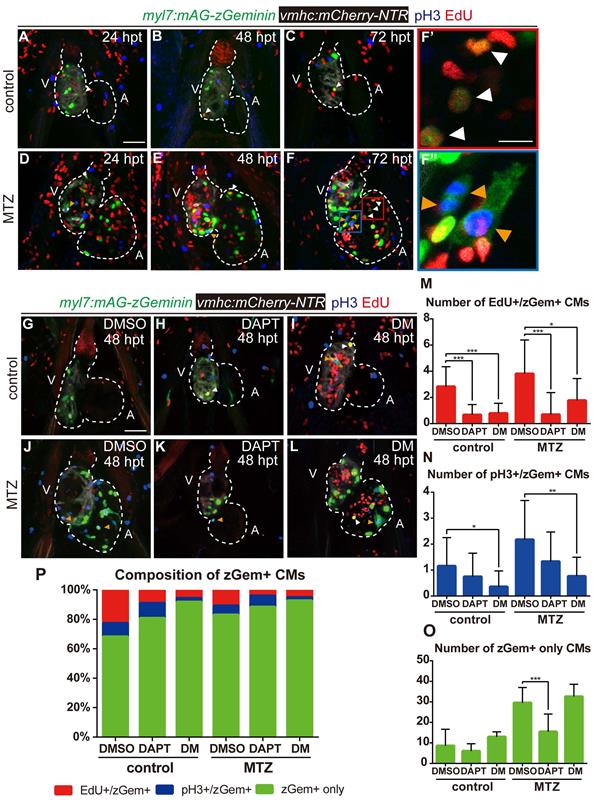 In this study we affirmed the upregulated expression of multiple BMP signaling components by WISH and the activation of BMP signaling in the myocardium and epicardium by pSmad1/5/9 immunostaining and Bre:dGFP reporter signals during larval ventricle regeneration. In zebrafish larvae, bmp10 has been reported to express in the endocardium, while bmp10l is expressed in the myocardium [38, 39]. The expression of bmp6 and id2b is endocardial specific during heart regeneration [40]. Wu et al. reported that bmp2b and bmp7 was expressed in the endocardium and epicardium of cryo-injured hearts, while pSmad1/5/9 signals were up-regulated in the myocardium [21]. Thus, we speculate that BMP signaling activation in myocardium may be promoted by enhanced ligand secretion from the endocardium after ventricle ablation, probably through interaction with other endocardial signaling pathways [26, 29, 41].

It is suggested that multiple signaling pathways eventually converge together and control cardiomyocyte cell cycle progression through certain function axes [42], implying the importance to understand the complex crosstalk among different signaling pathways. Cardiomyocyte proliferation in injured hearts with defective endocardial Notch signaling can be partially restored by WNT antagonist treatment, demonstrating the crosstalk between Notch and WNT/β-catenin signaling [43]. Moreover, endocardial Notch signaling promotes cardiomyocyte reprogramming and cardiac regeneration through activating myocardial Erbb2 and BMP signaling [29]. Our results proved that inhibition of Notch signaling by DAPT abolished the upregulated expression of ligand bmp10 and blocked BMP signaling activation. BMP pathway blockage by DM treatment did not reciprocally affect expression of notch1b nor signals of Notch signaling reporter, suggesting BMP signaling acts epistatic downstream of Notch signaling. Whether this regulation is cell autonomous or not requires further investigation. Our results showed a broader expression of bmp10 by WISH than the more confined Notch signaling revealed by tp1:dGFP fluorescence, suggesting at least certain cell non-autonomous mechanism is involved in this process. Interestingly, we also observed differential influence of Notch and BMP signaling on the re-activation of cardiogenic factors during regeneration. Bmp signaling exerts opposite effects on chamber differentiation during early heart development [44, 45], so one possible explanation is that BMP pathway regulates this process in a chamber-specific way by which the ventricle, instead of the atrium, is more susceptible. Another possibility is that the BMP pathway may not be directly involved in the regulation of cardiogenic factor re-activation, but rather that its inhibition on cardiomyocyte proliferation leads to a decrease in the number of ventricular cardiomyocytes as well as the expression level of cardiogenic factors. This is consistent with a previous report that BMP10 is responsible for cardiomyocyte proliferation while NRG1 regulates cardiomyocyte differentiation downstream of Notch signaling during mice ventricle trabeculation [27].

Many studies on the regulation of cell proliferation focus on the change in cell cycle progression [42, 46, 47]. Blocking Notch signaling pathway has been reported in several models to cause G0/G1 phase arrest by influencing p27Kip1 and other elements, thereby affecting proliferation [48-50]. On the contrary, few studies have been conducted on the mechanism of BMP pathway in regulating proliferative events. Overexpression of Id1 increases Cdk4 levels and reduces p21Clip1, thus promoting cell cycle progression in mouse cardiomyocytes [51]. BMP signaling responses to laminar shear stress by activation of p21 which leads to G2/M phase arrest of human bladder transitional carcinoma cells [52]. In our larval ventricle regeneration model, inhibition of BMP signaling reduced the numbers of EdU+/zGem+ and pH3+/zGem+ cardiomyocytes but had no effect on the number of zGem+ only cardiomyocytes, implying cell-cycle arrest at G2 phase. Blocking Notch signaling pathway may possibly led to G0/G1 phase arrest because of the universally dwindled number of proliferative cardiomyocytes. Our study provides novel insights into and potential direction for the understanding of cardiomyocyte proliferation in zebrafish ventricle regeneration process. The molecular mechanisms how these signaling pathways regulate proliferation, and whether it is conserved in different species and under different situations warrants further investigation.

Zebrafish were maintained under standard conditions [53]. Zebrafish embryos were raised at 28 °C and were staged according to Kimmel et al. [54]. All experiments were performed in accordance with institutional and national animal welfare guidelines. The transgenic lines used in this study were as follows: Tg(vmhc:mCherry-NTR), Tg(Bre:dGFP), Tg(tp1:dGFP), Tg(myl7:mAG-zGeminin).

Tg(vmhc:mCherry-NTR) larvae were treated with 6 mM MTZ (metronidazole, Sigma) in E3 water at 3 dpf for four hours as previously described [6]. After washing with fresh E3 water for three times, the larvae were then incubated in 100 μM DAPT (Sigma-Aldrich), 7.5 μM Dorsomorphin (Sigma-Aldrich) or 1% DMSO (dimethyl sulfoxide, Thermo Fisher Scientific) as control for 0-2 dpt or other time frames as indicated.

The larvae were incubated with 500 μM EdU for 1 h in E3 water with 2% DMSO to facilitate EdU solubilization. After pulse labeling, larvae were rinsed with E3 water, anaesthetized with 0.2% tricaine and fixed in 4% PFA. The CLICK-IT reaction for EdU labeling was performed according to the manufacturer's instruction (Thermo Fisher Scientific).

Live imaging and immunostaining images were obtained using a Zeiss LSM880 confocal microscope or an Olympus IX83 inverted microscope. The numbers of differentially marked cardiomyocytes were counted with ZEN software or cellSens software.

Values were presented as mean ± SD. Statistical significance was defined as a threshold of P < 0.05 determined by Student's t-test between two groups, ANOVA analysis between more than two groups or Binomial test in quantification of the percentage of recovered hearts.

We thank Haitao Zhou and Lifeng Li for fish care and other lab members for in depth discussion.

All procedures involving animals were approved by Fudan University Institutional Animal Care and Use Committee (IACUC) and in accordance with the NIH Guide for the care and use of Laboratory Animals.

53. Westerfield M. The Zebrafish Book. A Guide for the Laboratory Use of Zebrafish (Danio rerio), 5th Edition. University of Oregon Press, Eugene. 2007