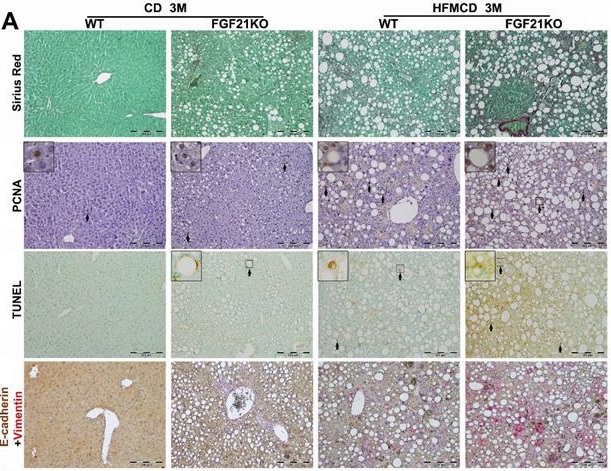 Background: Nonalcoholic steatohepatitis (NASH) is the most severe form of non-alcoholic fatty liver disease (NAFLD) and a potential precursor of hepatocellular carcinoma (HCC). In our previous studies, we found that endocrine fibroblast growth factor 21 (FGF21) played a key role in preventing the development of NASH, however, the FGF15/19 mediated-FGFR4 signaling worsened NASH and even contributed to the NASH-HCC transition. The aim of this study is to determine whether FGF15/FGFR4 signaling could alleviate or aggravate NASH in the FGF21KO mice.

Results: Significant increase of FGF15 production was found in the liver of the NASH-FGF21KO mice, however the increased FGF15 protein was unable to alleviate hepatic lipid accumulation. In contrast, up-regulated FGF15/19/FGFR4 signaling was found in the FGF21KO mice with increased NASH severity, as evident by hepatocyte injury/repair, fibrosis and potential malignant events. In in vitro studies, blockage of FGFR4 by BLU9931 treatment attenuated the lipid accumulation, up-regulated cyclin D1, and epithelial-mesenchymal transition (EMT) in the hepatocytes.

Conclusion: The increased FGF15 in NASH-FGF21KO mice could not substitute for FGF21 to compensate its lipid metabolic benefits thereby to prevent NASH development. Up-regulated FGFR4 signaling in NASH-FGF21KO mice coupled to proliferation and EMT events which were widely accepted to be associated with carcinogenic transformation.