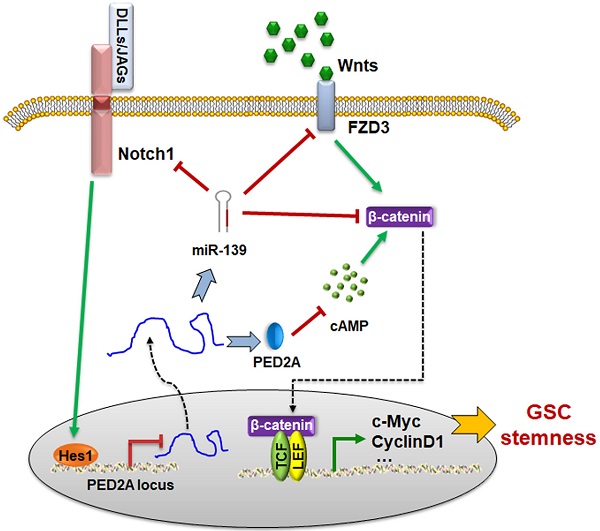 Rationale: The malignant phenotypes of glioblastomas (GBMs) are primarily attributed to glioma stem cells (GSCs). Our previous study and other reports have suggested that both miR-139 and its host gene PDE2A are putative antitumor genes in various cancers. The aim of this study was to investigate the roles and mechanisms of miR-139/PDE2A in GSC modulation.

Results: We demonstrated that miR-139 was concomitantly transcribed with its host gene PDE2A. Both PDE2A and miR-139 indicated better prognosis of gliomas and were inversely correlated with GSC stemness. PDE2A or miR-139 overexpression suppressed the stemness of PD-GSCs. FZD3 and β-catenin, which induced Wnt/β-catenin signaling activation, were identified as targets of miR-139 and mediated the effects of miR-139 on GSCs. Meanwhile, PDE2A suppressed Wnt/β-catenin signaling by inhibiting cAMP accumulation and GSK-3β phosphorylation, thereby modulating the self-renewal of PD-GSCs. Notably, Notch1, which is also a target of miR-139, suppressed PDE2A/miR-139 expression directly via downstream Hes1, indicating that miR-139 promoted its own expression by the miR-139-Notch1/Hes1 feedback circuit. Expectedly, targeted overexpression miR-139 or PDE2A in glioma with OCP system significantly repressed the stemness and decelerated glioma progression.

Conclusions: Our findings elaborate on the inhibitory functions of PDE2A and miR-139 on GSC stemness and tumorigenesis, which may provide new prognostic markers and therapeutic targets for GBMs.