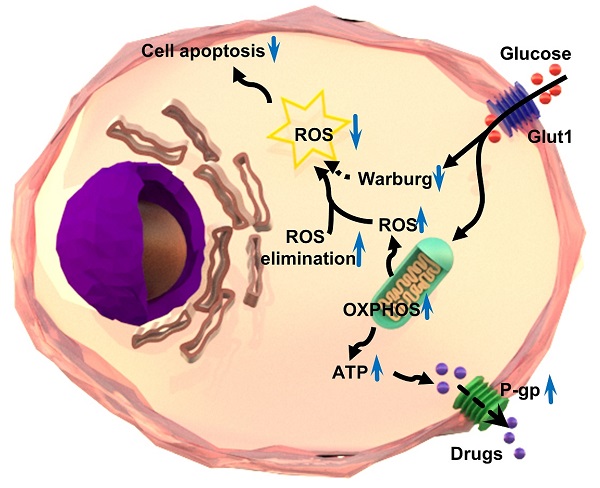 Anti-cancer chemo-drugs can cause a rapid elevation of intracellular reactive oxygen species (ROS) levels. An imbalance in ROS production and elimination systems leads to cancer cell resistance to chemotherapy. This study aimed to evaluate the mechanism and effect of ROS on multidrug resistance in various human chemoresistant cancer cells by detecting the changes in the amount of ROS, the expression of ROS-related and glycolysis-related genes, and cell death. We found that ROS was decreased while oxidative phosphorylation was increased in chemoresistant cells. We verified that the chemoresistance of cancer cells was achieved in two ways. First, chemoresistant cells preferred oxidative phosphorylation instead of anaerobic glycolysis for energy generation, which increased ATPase activity and produced much more ATP to provide energy. Second, ROS-scavenging systems were enhanced in chemoresistant cancer cells, which in turn decreased ROS amount and thus inhibited chemo-induced cell death. Our in vitro and in vivo photodynamic therapy further demonstrated that elevated ROS production efficiently inhibited chemo-drug resistance and promoted chemoresistant cell death. Taken together, targeting ROS systems has a great potential to treat cancer patients with chemoresistance.

Chemotherapy is the main treatment approach for most patients with advanced cancer. However, patients often experience chemoresistance and recurrence [1]. The mechanism of the multidrug resistance (MDR) of chemotherapy remains unclear. It has been shown that chemoresistance of cancer is related to many factors, including drug-efflux transport proteins such as P-glycoprotein (P-gp) [2] encoded by ATP-binding cassette subfamily B member 1 (ABCB1) gene, and the inhibition of cell apoptosis, etc [3]. Chemo-drugs can rapidly elevate intracellular reactive oxygen species (ROS) production (e.g. hydrogen peroxide, superoxide ion, and hydroxyl radicals) [4], which are oxygen derivatives formed in the process of the redox reaction. The elevated ROS can cause cell death, specifically through apoptosis [5], autophagy, ferroptosis, and other death pathways [6]. However, to avoid ROS damage, cells eventually initiate ROS-scavenging systems by regulating a series of elimination modulators to remove ROS, such as enhancing the function of the intracellular antioxidant system [7], which leads cancer cells to resist the drug. Some reductive or oxygen-free radical scavenging enzymes such as glucose-6-phosphate dehydrogenase (G6PD) [8], glutamate-cysteine ligase catalytic subunit (GCLC) [9], thioredoxin (TXN) [10], superoxide dismutase (SOD1) [11], NAD(P)H dehydrogenase 1 (NQO1) [12] were involved. Some ROS-induced autophagy and apoptosis molecules such as ferritin light chain (FTL) [13], mucolipin-1 (MCOLN1) [14], hypoxia-inducible factor 1-alpha (HIF1A) [15] may also play a role in chemoresistance.

In general, cancer cells tend to obtain energy through anaerobic glycolysis, which is called the Warburg effect [16] that is thought to be caused by dysfunction of the mitochondria [17], rather than oxidative phosphorylation even in the presence of sufficient oxygen. Some glycolysis-related genes such as glucose transporter-1 (GLUT1) [18], hexokinase 2 (HK2) [19], pyruvate kinase isozymes M2 (PKM2) [20], and glyceraldehyde-3-phosphate dehydrogenase (GAPDH) [21], and lactate dehydrogenase A (LDHA) [22] may be altered during the chemoresistant processes. Recent studies have also shown that cancer cells have normal mitochondria [23]. Cisplatin (DDP)-resistant human ovarian cancer cells tend to mitochondrial oxidative phosphorylation to produce ATP for cell energy supply [24]. Therefore, it is essential to understand the mechanisms by which ROS plays a critical role in the regulation of cancer cell survival and the progression of chemoresistance. This study aimed to evaluate the mechanism and the effect of ROS on chemoresistance in cancer cells in vitro and in vivo.

Cells were seeded in a 96-well plate at a density of 1×104 cells/well with 100 µL of medium containing various concentrations of chemo-drugs in quadruplicate. The cell viability was detected using the CCK-8 kit (Dojindo, Japan). The optical density (OD) of each well was measured by a microplate analyzer (BioTek Epoch, USA) at 450 nm wavelength. The IC50 value was calculated using GraphPad (V5.0).

Cells were seeded in a six-well plate at a density of 2×105 cells/well. After incubation for 16 h, cells were treated with or without a chemo-drug at a concentration equal to the IC50 for 6 h and conducted for ROS detection. The cells were trypsinized, centrifuged, and stained by using a ROS assay kit (Beyotime Biotechnology, Shanghai, China) according to the product instructions. Subsequently, 500 µL PBS was added to each sample and a ROS level was determined by flow cytometry (Gallios, Beckman Coulter, Inc., Brea, CA, USA). The data were analyzed using FlowJo software (V10, Becton, Dickinson and Company, USA).

Cells were seeded in a 35 diameter mm confocal culture dish with 20 mm of glass-bottom at a volume of 0.5 mL/dish. After confluence reached 60-80%, cells were stained using a ROS assay kit (Beyotime Biotechnology) according to the product instructions, further stained with Hoechst 33342 (Beyotime Biotechnology), washed with PBS for 3 times, and imaged by a laser confocal microscope (SP8 STED 3X, Leica, Germany).

Cells were stained with Annexin-V conjugated with fluorescein (FITC) and propidium iodide (PI) according to the product instructions (BD Pharmingen, BD Biosciences, USA). In brief, cell suspension at a density of 1×106/100 μL was transferred into a 5 mL tube, followed by adding 1 μL of Annexin-V-FITC and/or 3 μL of PI. After incubation with 400 μL of 1× binding buffer in the dark for 15 min, cells were detected by flow cytometry (Gallios, Beckman Coulter, Inc., Brea, CA, USA).

ATPase activity was determined according to the ATPase kit instructions (Keygen Biotech). Briefly, cells were cultured in a 6-well plate for 24 h. After washing twice with saline, the cells were lysed with a solution containing SDS, followed by ultrasonication. After centrifugation, the suspension was collected. The activity of ATPase was evaluated by measuring the amount of inorganic phosphorus produced by Na+K+ and Ca++Mg++ ATPase decomposition. After adding a phosphorus fixing agent for 30 min at 37 ℃, the OD value of each sample was measured by a microplate analyzer at 660 nm wavelength. A 0.5 µmol/ mL of phosphorus storage solution was used for calibration. ATPase activity was calculated according to the following formula: ATPase activity (µ molPi/gHb/hour) = (ODexperment-ODcontrol)/ODcalibrator × Calibrator concentration × Dilution ratio of sample × 6 ÷ Protein concentration.

Protoporphyrin (Macklin, Shanghai, China) was dissolved in dimethylsulfoxide (DMSO) at a concentration of 4 mg/mL. Cells were seeded in 48-well or 96-well plates (black with clear flat bottom, Corning, USA) and incubated for 24 h. After replacement of fresh medium containing 0~5 mg/mL of protoporphyrin and incubation for 4 h, the cells were irradiated using a laser device (Lei Ze Electronic Technology, Xian, China) with a wavelength at 638 nm, 300 mW/cm2 for 0-120 sec. Subsequently, the ROS concentrations were detected using a ROS assay kit, cell viability was determined using a CCK-8 kit, and apoptotic cells were measured using an Annexin-V FITC apoptosis detection kit.

Establishment of tumor-bearing mice and in vivo photodynamic therapy

The ethics of animal experiments was approved by the Ethics Committee of Shanghai Public Health Clinical Center. Four-week-old female BALB/C nude mice were purchased from B&K Laboratory Animals Co., LTD. (Shanghai, China) and raised in a standard feeding condition with adequate food and water. After 7 days, each mouse was injected with approximately 3×106 A549/PTX cells in 100 µL of serum-free RPMI-1640 medium on the right side. After 2 weeks, the tumor-bearing mice were randomly divided into 2 groups (7 per group). Each mouse was injected intratumorally with either 100 µL of normal saline (control) or 100 µL of protoporphyrin (0.3 mg/mL in normal saline) once every 2 days for a total of 5 times. The body weight and tumor volume were monitored during the treatment. The calculation formula of tumor volume is V = ab2/2, where V, a, and b indicate the volume, tumor length, and tumor width, respectively. At the end of the treatment, the mice were sacrificed and their tumors were excised and photographed. Detection of the production of hydroxyl radicals in tumor tissue lysates was performed according to the hydroxyl radicals production kit instructions (Keygen Biotech). The tumor tissue was fixed with formalin and paraffin-embedded tumor tissue specimens were conducted for hematoxylin-eosin (H&E), proliferating cell nuclear antigen (PCNA), and Tunel assays at Shenghua Biological Technology Co., LTD (Shanghai, China).

The experimental data are shown as mean ± standard deviation (SD) for cell viability, relative fluorescence intensity, and ATPase activity, and as the mean ± standard error (SEM) for IC50 values and qRT-PCR. Animal statistics for analyzing the difference between two groups were performed using Student's t-test. Statistical results with P < 0.05 were considered statistically significant.

ROS level was lower in chemoresistant cells than chemosensitive cells

Next, we found that the ROS levels were lower in chemoresistant cells than chemosensitive cells determined by flow cytometry (Figure 1L-R) and laser confocal microscopy (Figure 1S). 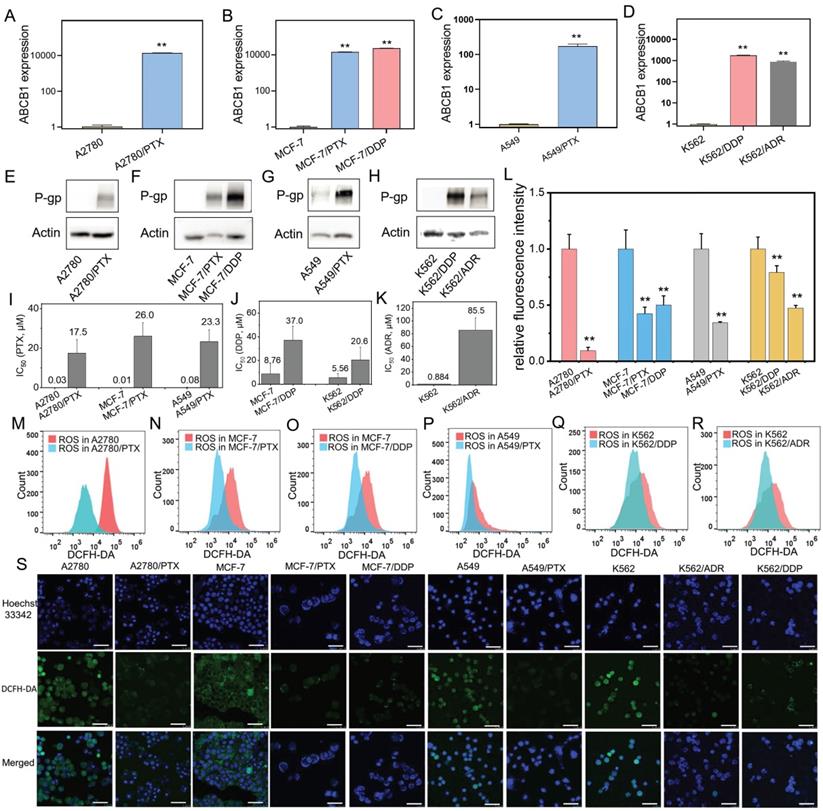 Next, we used protoporphyrin as a photosensitizer for photodynamic therapy (Figure 5A). As protoporphyrin may be a substrate for ABC transporter such as ABCG2/BCRP [25], next we examined the expression of ABCG2 in chemoresistant cells. We found that the ABCG2 level was not increased in most chemoresistant cells compared with their sensitive cells, except for A2780/PTX (Figure S5), indicating that protoporphyrin would be retained in the cytosol and the efficacy of treatment would not be affected by the efflux pump ABCG2 in most chemoresistant cells. Furthermore, the ROS levels in chemoresistant cells were significantly elevated after laser irradiation (Figure 5B-E), while the cell viability of chemoresistant cells was significantly reduced (Figure 5F-H), along with the promotion of cancer cell death (Figure 5I-5L). Flow cytometry data showed that there was a significant difference in the number of dead cells between the Laser (25.14%), Protophyrin (31.35%), and Laser+Protophyrin (67.83%) groups (Figure 5I-5L). However, the apoptotic cell population was lower in the Laser+Protophyrin (1.21+0.32%) group compared to Laser (9.12+1.92%) and Protophyrin (11.7+1.65%) groups. In addition, we observed that the ratio of Bax/Bcl-2 between chemoresistant and sensitive cells was similar when cells were cultured in a chemo-free medium (Figure S6). These data indicate that photodynamic therapy can elevate the level of ROS which may effectively promote chemoresistant cell death but not through apoptosis.

Because GAPDH is a glycolysis-related gene and was differentially expressed between chemoresistant and sensitive cells, 18S was applied as an endogenous control gene to normalize the interested genes. To confirm the reliabilities of qRT-PCT, another endogenous control gene Actin was applied. Indeed, the results of relative mRNA expression of targeted genes were reproducible after normalizing to Actin. (Figure S7). 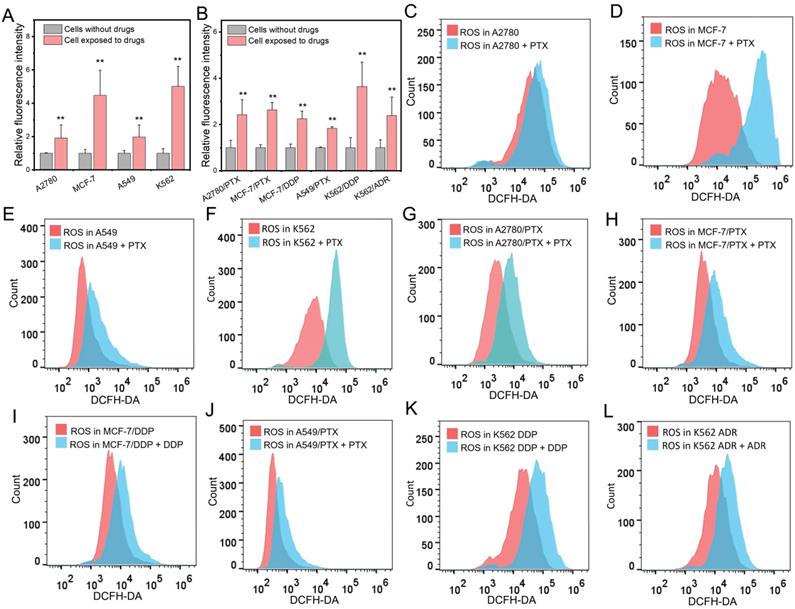 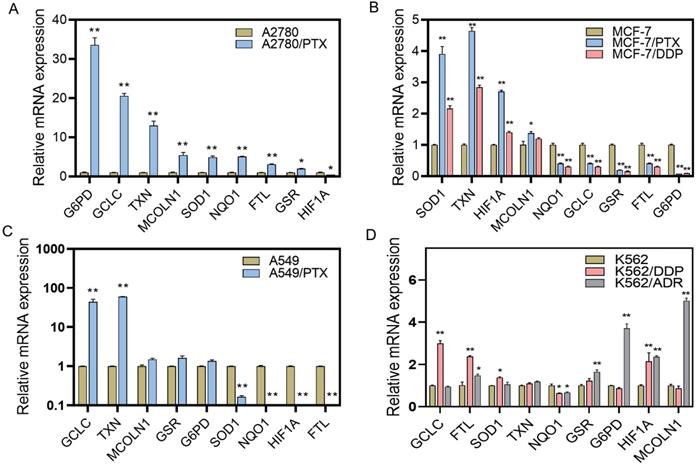 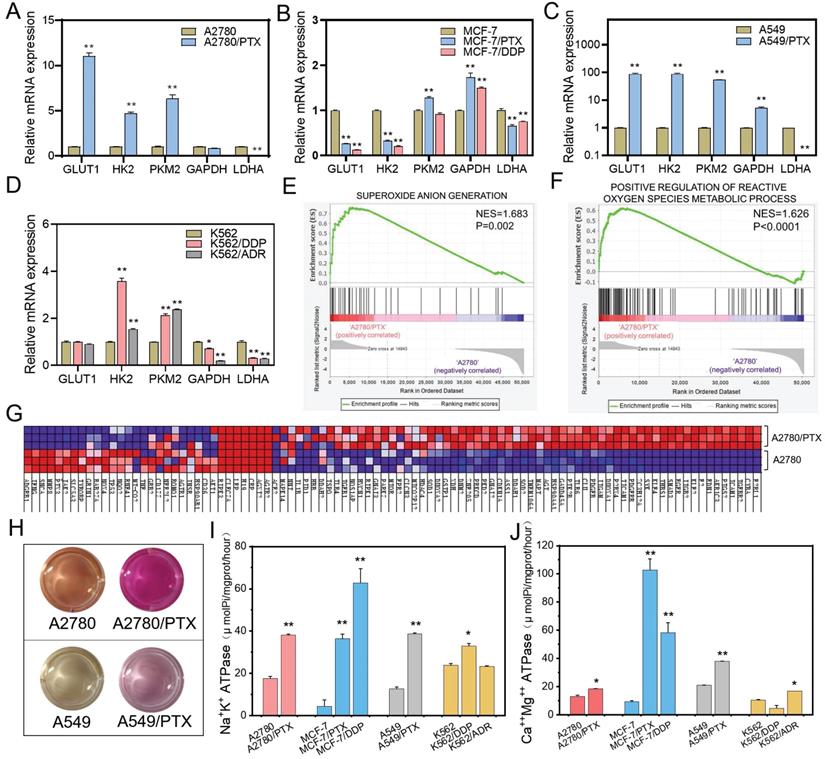 We did observe an increase of ROS in chemoresistant cells after a chemo-drug treatment, which is consistent with the previous report that ROS was elevated in cisplatin-resistant ovarian cancer cells [34]. Given the direct relationship between ROS and drug resistance, increasing intracellular ROS may be an important factor to reverse anti-cancer drug resistance [35]. Therefore, targeting ROS systems has a great potential to treat cancer patients with chemoresistance. Thus, reversal of multidrug resistance of cancers can be achieved by the elevation of intracellular ROS levels. It has been shown that photodynamic therapy is an efficient method to produce ROS [36]. Our in vitro and in vivo experiments using photodynamic therapy showed that an increase in ROS can promote chemoresistant cell death. Because protoporphyrins are widely used to produce ROS efficiently [37], we used photodynamic therapy as an effective method to generate ROS and suppress tumor growth. 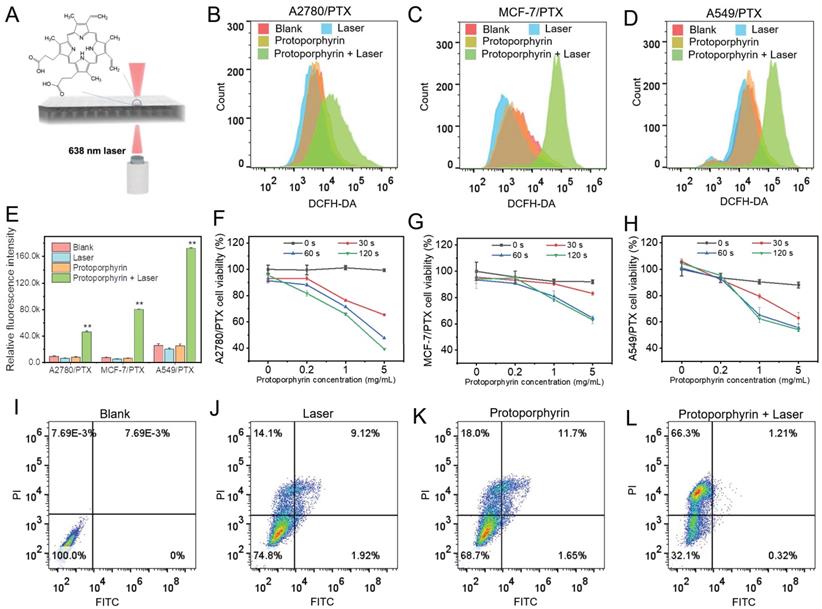 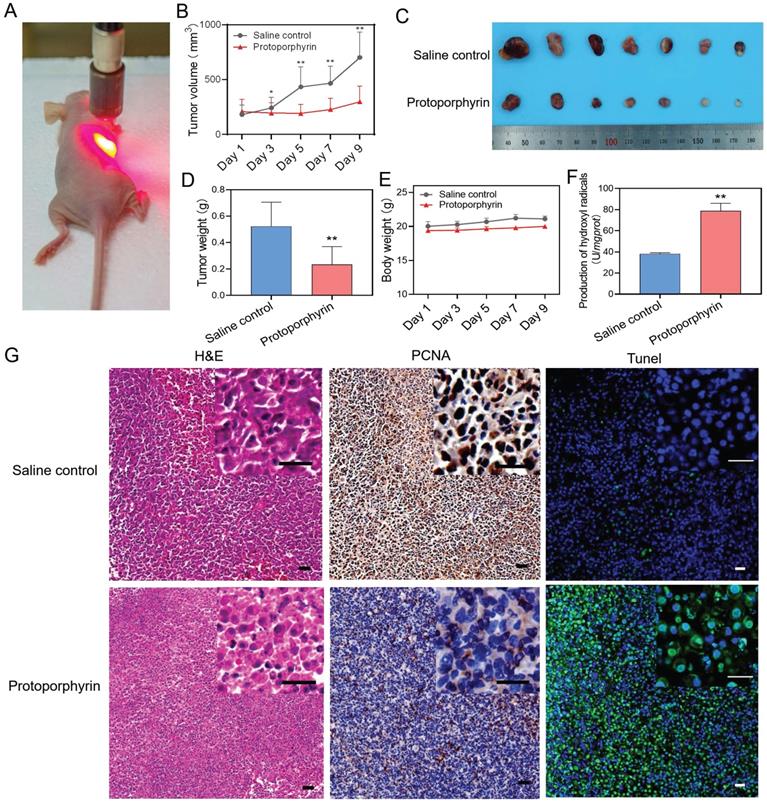 In summary, the intracellular level of ROS is significantly lower in chemoresistant cancer cells than chemosensitive cells. Chemoresistant cancer cells prefer oxidative phosphorylation instead of anaerobic glycolysis for energy generation. The ROS-scavenging system is enhanced and aerobic glycolysis is restrained in chemoresistant cells. The reduction of ROS by oxidative phosphorylation results in the inhibition of chemotherapeutic drug-induced apoptosis, and in turn, leads to the progression of chemoresistance in cancer cells (Figure 7). The significance of the findings extends our knowledge of the relationship between ROS production/clearance and chemo-drug resistance and provides a novel mechanistic and technical meaning of reversing chemoresistance by increasing ROS production. Photodynamic therapy is highly effective to produce ROS that has proved to be important in inhibiting the chemoresistance of cancer cells. Thus, targeting ROS systems has clinical potential. 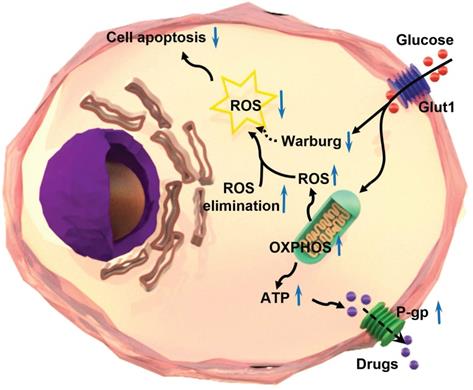 The main data supporting the findings of this study are available within the article and the enclosed file of Supplementary Materials. Extra data are available from the corresponding author upon request.

The authors declare that they have no known competing financial interests or personal relationships that could have appeared to influence the work reported in this paper.

10. Matsuzawa A. Thioredoxin and redox signaling: Roles of the thioredoxin system in control of cell fate. Arch Biochem Biophys. 2017;617:101-5