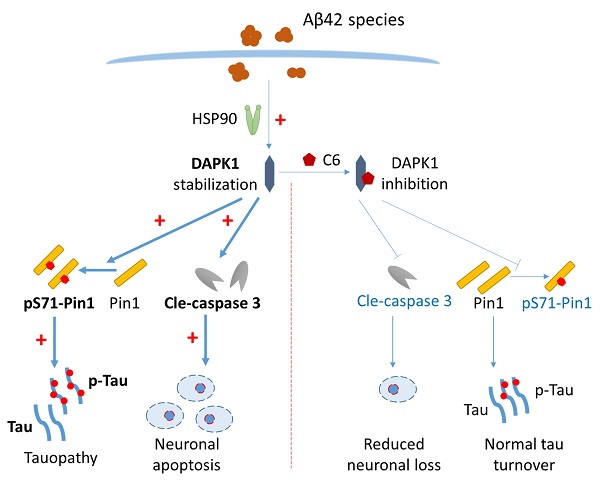 The aggregation of amyloid-β (Aβ) peptides into oligomers and fibrils is a key pathological feature of Alzheimer's disease (AD). An increasing amount of evidence suggests that oligomeric Aβ might be the major culprit responsible for various neuropathological changes in AD. Death-associated protein kinase 1 (DAPK1) is abnormally elevated in brains of AD patients and plays an important role in modulating tau homeostasis by regulating prolyl isomerase Pin1 phosphorylation. However, it remains elusive whether and how Aβ species influence the function of DAPK1, and whether this may further affect the function and phosphorylation of tau in neurons. Herein, we demonstrated that Aβ aggregates (both oligomers and fibrils) prepared from synthetic Aβ42 peptides were able to upregulate DAPK1 protein levels and thereby its function through heat shock protein 90 (HSP90)-mediated protein stabilization. DAPK1 activation not only caused neuronal apoptosis, but also phosphorylated Pin1 at the Ser71 residue, leading to tau accumulation and phosphorylation at multiple AD-related sites in primary neurons. Both DAPK1 knockout (KO) and the application of a specific DAPK1 inhibitor could effectively protect primary neurons against Aβ aggregate-induced cell death and tau dysregulation, corroborating the critical role of DAPK1 in mediating Aβ aggregation-induced neuronal damage. Our study suggests a mechanistic link between Aβ oligomerization and tau hyperphosphorylation mediated by DAPK1, and supports the role of DAPK1 as a promising target for early intervention in AD.