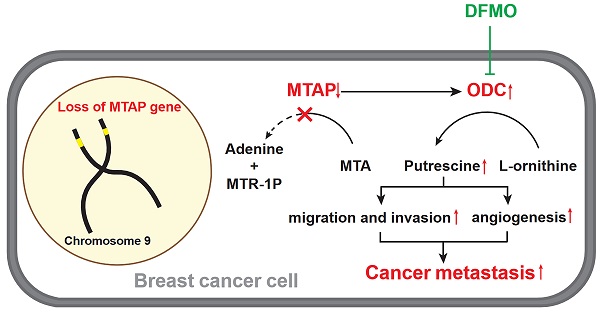 5'-Methylthioadenosine phosphorylase (MTAP) is a key enzyme in the methionine salvage pathway and has been reported to suppress tumorigenesis. The MTAP gene is located at 9p21, a chromosome region often deleted in breast cancer (BC). However, the clinical and biological significance of MTAP in BC is still unclear. Here, we reported that MTAP was frequently downregulated in 41% (35/85) of primary BCs and 89% (8/9) of BC cell lines. Low expression of MTAP was significantly correlated with a poor survival of BC patients (P=0.0334). Functional studies showed that MTAP was able to suppress both in vitro and in vivo tumorigenic ability of BC cells, including migration, invasion, angiogenesis, tumor growth and metastasis in nude mice with orthotopic xenograft tumor of BC. Mechanistically, we found that downregulation of MTAP could increase the polyamine levels by activating ornithine decarboxylase (ODC). By treating the MTAP-repressing BC cells with specific ODC inhibitor Difluoromethylornithine (DFMO) or treating the MTAP-overexpressing BC cells with additional putrescine, metastasis-promoting or -suppressing phenotype of these MTAP-manipulated cells was significantly reversed, respectively. Taken together, our data suggested that MTAP has a critical metastasis-suppressive role by tightly regulating ODC activity in BC cells, which may serve as a prominent novel therapeutic target for advanced breast cancer treatment.