Low-density lipoprotein receptor-related protein 1B (LRP1B) is reputed as a tumor suppressor gene on chromosome 2. Gene mutations in LRP1B are frequently detected in many cancers, with 12% in non-small cell lung cancer, 11% in head and neck cancer, 9% in cervical cancer, 8% in bladder cancer, and 8% in prostate cancer [12]. A previous melanoma study reported that LRP1B mutation was enriched in responders (34%) to immune checkpoint inhibitors (ICIs) compared with non-responders (3%) [13], which suggested LRP1B mutation may be an independent predictor for the response to ICI. Previous studies have led to the notion that the diverse clinical outcomes of CC and HNSCC are likely a reflection of the genetic heterogeneity of the tumor subclones from the gene expression profiles and the intratumor metabolic features [14, 15]. The identification of molecular patterns or biomarkers of CC and HNSCC that could not only predict the tumor biology but help to further classify HPV-related cancers. Patients with poor biological behavior could then be identified and treated with individual therapies [16]. In particular, LRP1B mutation was identified as a biomarker for ICIs in melanoma, non-small cell lung cancer [17], prostate cancer [18], and advanced biliary tract cancer [19].

Here, we correlated HPV status, somatic mutations, disease outcomes, HPV expression, mutation gene expression, and clinical information of CC and HNSCC samples from TCGA to systematically unravel the HPV-associated mutation gene, that is LRP1B. In addition, gene expression of LRP1B was used to calculate the receiver operating characteristic (ROC) curve between normal and tumor, which was synchronously compared to TP53 or RB1. Furthermore, the co-occurrence mutation gene of LRP1B was performed to identify a co-occurrence mutation signature with different clinical characteristics in CC and HNSCC. These results suggested the associations of HPV status and LRP1B mutation, and the prognostic value of LRP1B in HPV-related CC and HNSCC.

Integrated genomic and molecular data of 178 cervical carcinoma samples (169 HPV positive samples, 120 HPV-A9 positive samples, 103 HPV16 positive samples, and 78 HPV16 integration samples, Supplementary Table 4) were described as previously published as TCGA cohort 1 [22], including HPV status of the tumor, somatic (point mutation) mutation information of samples, days-to-last-follow-up information of samples, E6 normalized counts (status: spliced or un-spliced). HNSCC samples were downloaded and performed from HNSCC cohorts of cBioPortal tool (https://www.cbioportal.org/) with default settings [4, 23-26]. 21.9% of samples were with HPV status, 7.8% were with p16 status, 4.9% were with tumor HPV PCR, and 4.4% were with HPV in situ hybridization (ISH) status. Different research used different detection methods. 12.9% of samples with high-risk HPV were detected in RNA-Seq analysis [4]; 14% of all samples and 53% of oropharyngeal tumors were found positive for HPV based on PCR analysis [23]; 12.5% of samples showed HPV positive by ISH [24]. Gene expression profiles of LRP1B and corresponding clinical information were downloaded from the Gene Expression Omnibus (GEO), including GSE107591, GSE9750, GSE7803, and GSE63514.

HPV-E6 splices from RNA-seq were conducted by the previous piplines [22]. Transcript types included transcripts with the unspliced sequence of E6, transcripts spliced at E6 splice donor site (loci 226 of HPV16, loci 233 for HPV18).

The enrichment terms analysis was performed to demonstrate the biological processes (GO) and Kyoto Encyclopedia of Genes and Genome (KEGG) pathways of 289 co-occurrence mutation genes of LRP1B in Metascape [29] with default settings, an online gene annotation tool with multiple authoritative data sources. Gene symbols of 289 co-occurrence mutation genes of LRP1B were imported, then “Homo sapiens” was selected for further analysis to perform the role of the input genes in biological processes and KEGG pathways. The top 20 pathways and process enrichment were showed.

The cervical carcinoma samples of a TCGA cohort (n = 178) were downloaded [22] with WGS data. Samples were classified into one group with LRP1B mutation (n = 12) and the other group with LRP1B wild type (n = 166). Then, the top 255 mutation genes of all samples were displayed to analyze the mutation count of those two groups. Mutation count of CC (n = 605, TCGA-CC cohort 2), HNSCC (n = 1477) and pan-cancer studies (MSKCC) (n = 1676) were analyzed by clustering samples into LRP1B altered group and LRP1B unaltered group in cBioPortal tool (https://www.cbioportal.org/).

LRP1B mutation was associated with HPV status in CC and HNSCC

HPV 16 (73.8%) infections are the most prevalent type in cervical cancer patients [30]. We then performed the correlation analysis between HPV 16 status and gene mutation in the 103 samples (Figure 1B). LRP1B was found to be associated with HPV 16 integration status (P = 0.036) and TSC2 was preferred in HPV 16 non-integration group (P = 0.045). To further validate the correlation of LRP1B and TSC2 in HNSCC, we analyzed them in 1478 HNSCC samples and found that LRP1B was associated with tumor HPV status in HNSCC (P = 0.044, Figure 1C). 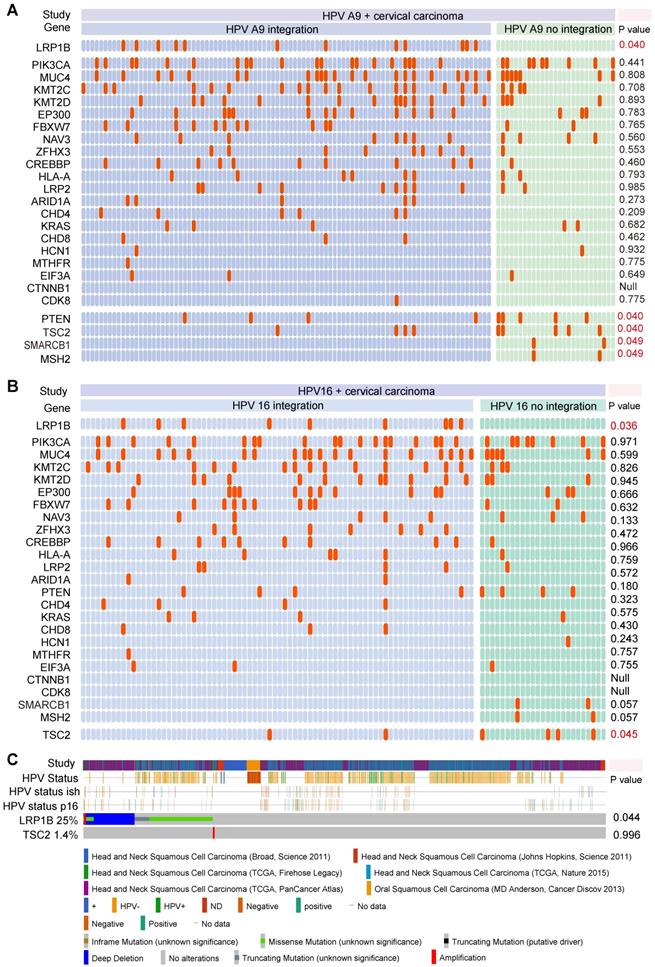 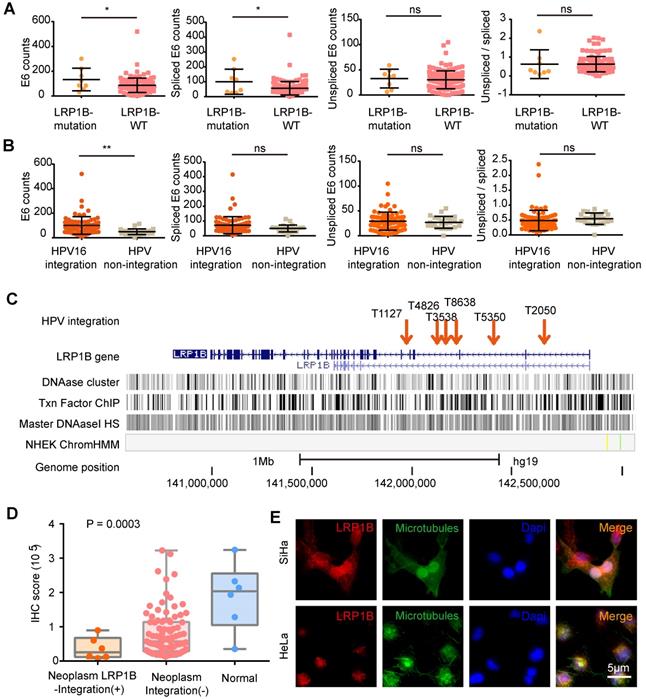 LRP1B mutation was associated with poor disease outcomes and LRP1B was identified as a prognostic biomarker in CC and HNSCC. Overall survival analysis of samples according to LRP1B mutation status in CC (A) and HNSCC (B). (C) LRP1B expression of tumor and normal in CC and HNSCC performed by GEPIA [40]. ROC curve analysis of LRP1B, TP53, and RB1 in GSE107591 (D), GSE9750, GSE7803 (E), and GSE63514 (F). CESE: cervical carcinoma, HNSCC: head and neck squamous cell carcinoma, HSIL: high grade squamous intraepithelial lesion. 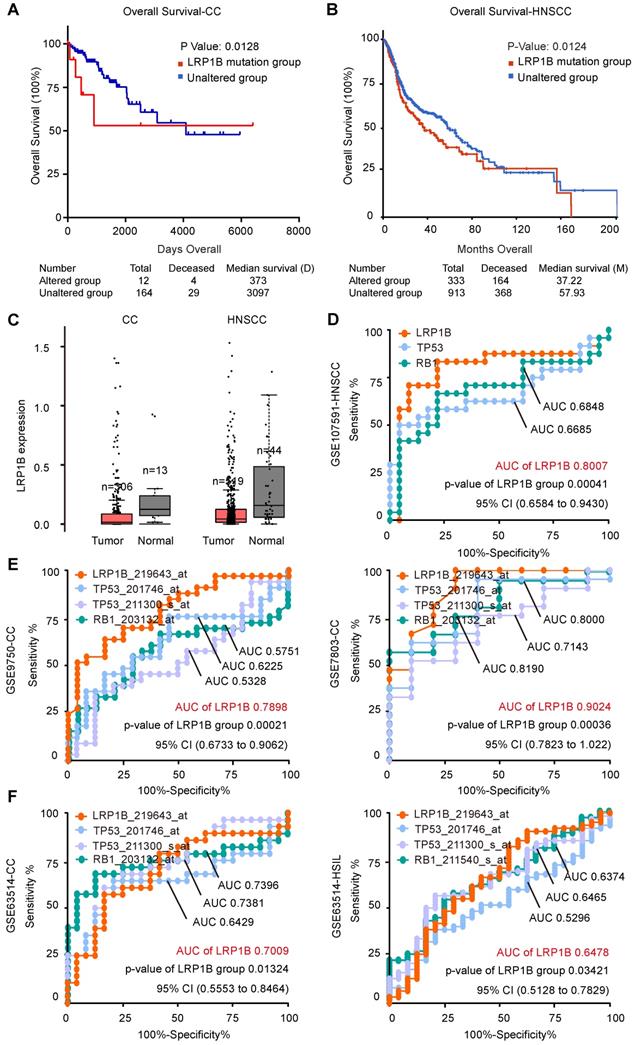 LRP1B mutation was associated with a higher mutation count in CC and HNSCC. (A) 178 cervical cancer samples (columns) were arranged by LRP1B mutation status, corresponding to the top 255 mutation genes (rows) of patients in cervical cancer. Each light blue column represents a somatic genomic alteration. P values were calculated by the Chi-square test. Mutation count analysis of samples according to LRP1B mutation status in TCGA-CC (B), in TCGA-HNSCC (C), and pan-cancer studies (D) from cBioPortal tool. P values were calculated by the Chi-square test. 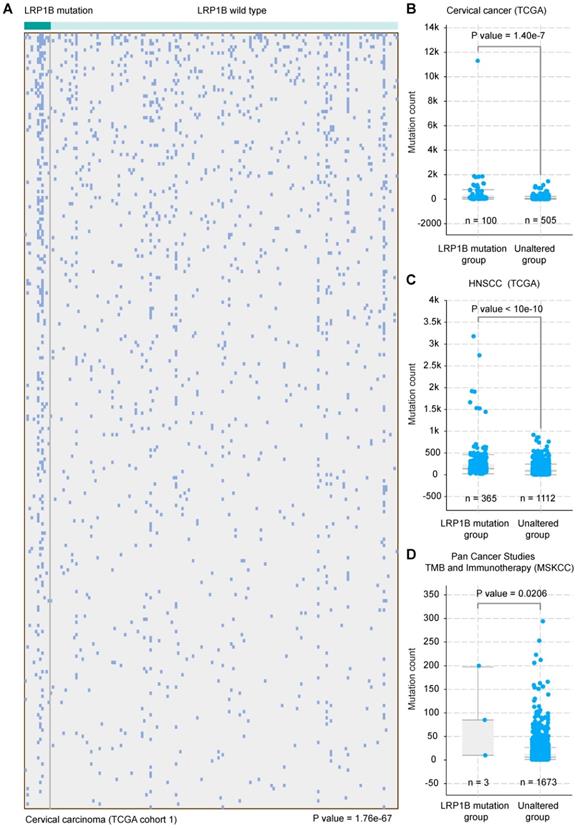 Co-occurrence mutation signature of LRP1B in CC and HNSCC 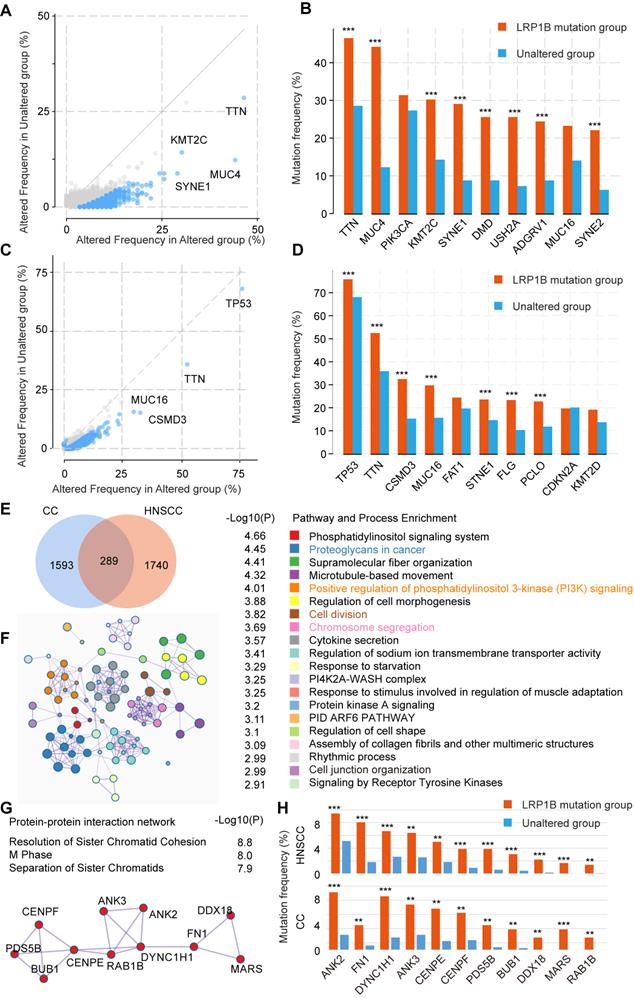 Previous studies have demonstrated that HPV integration correlates with disease outcomes, host immune response signatures, cellular differentiation, dysregulation of the expression of viral E6 and E7 oncogenes, and aberrant expression of the integrated cancer-related genes in CC and HNSCC [33]. While somatic mutations, such as PIK3CA, PTEN, TP53, STK11, and KRAS, and copy-number alterations in the pathogenesis of CC and HNSCC were significantly identified [2, 4, 22, 23]. However, the correlation between HPV integration and gene mutation remains to be determined. As suggested by our results, LRP1B mutation was identified to be associated with tumor HPV status in CC and HNSCC and be associated with higher total E6 expression and spliced E6 expression in CC, which might be responsible for the correlation between genomic alteration accumulation and viral genome integration.

LRP1B belongs to the gene family of low-density lipoprotein (LDL) receptor, which plays multi-roles as a tumor suppressor gene in normal cell function and development [34]. Down-regulation of LRP1B was reported to promote cell growth and migration in colon cancer cells [35], and in renal cell cancer [36], and is associated with acquired chemotherapy resistance in high-grade serous ovarian cancer [37]. In accordance with our results that LRP1B mutation tended to down-regulated LRP1B expression and showed poor disease outcome in CC and HNSCC. In addition, LRP1B mutation serves as a good predictor for ICIs in multiple cancer types, largely due to the correlation with higher tumor mutation burden [12, 17]. In CC and HNSCC, our results demonstrated that LRP1B mutation, as well as LRP1B co-occurrence mutation signature, were associated with higher mutation count. Higher tumor mutational burden shows distinct clinicopathologic features and is a biomarker for good efficacy and clinical response to ICIs in diverse cancers [38].

LRP1B was also detected as an HPV integration hotspot in CC [27], as suggested by our results, HPV-LRP1B integration was associated with the downregulation of LRP1B. Additionally, the LRP1B IHC staining score could serve as a sensitive biomarker for cervical lesion detection, with 0.801 area under curve (AUC), 90% sensitivity, and 56.76% specificity [39]. In our results, the expression status of LRP1B was identified as a biomarker for normal and neoplasm samples of CC and HNSCC, with AUC 0.8007 in HNSCC and 0.9024 in CC, which suggested that LRP1B could serve as a biomarker in CC and HNSCC. Furthermore, LRP1B co-occurrence mutation signature tended to identify a cluster sample with multiple molecular bases of CC and HNSCC. The identification of molecular patterns or biomarkers of CC and HNSCC that could not only predict the tumor biology but help to further classify HPV-related cancers.

Still, with multi-molecular analyses in CC and HNSCC, our studies had several limitations in LRP1B mutation characteristics. Firstly, the correlation between LRP1B mutation and tumor HPV status was lack of molecular evidence and underlying mechanisms in the interaction process. Secondly, the biomarker role of LRP1B in ICIs was showed in other cancer types, there was no ICIs treatment cohort of CC or HNSCC included for clinical analysis, making the biomarker role of LRP1B only focus on cancer survival, mutation count, AUC analysis, and molecular bases of CC and HNSCC. The only way to demonstrate the molecular function of LRP1B was cell biology tests, which need to be further explored in HPV-related CC and HNSCC.

Overall, by integrating molecular data of CC and HNSCC, including gene mutation, tumor HPV status, gene expression, and clinical information, we identified LRP1B mutation, as well as co-occurrence mutation signature of LRP1B, was associated with tumor HPV status, higher mutation count, and poor cancer survival in CC and HNSCC. Also, LRP1B was showed as a good biomarker between normal and neoplasm samples than TP53, and RB1 in CC and HNSCC. These results provided molecular insight into the correlation between HPV status and LRP1B mutation, and the prognostic value of LRP1B in HPV-related CC and HNSCC. 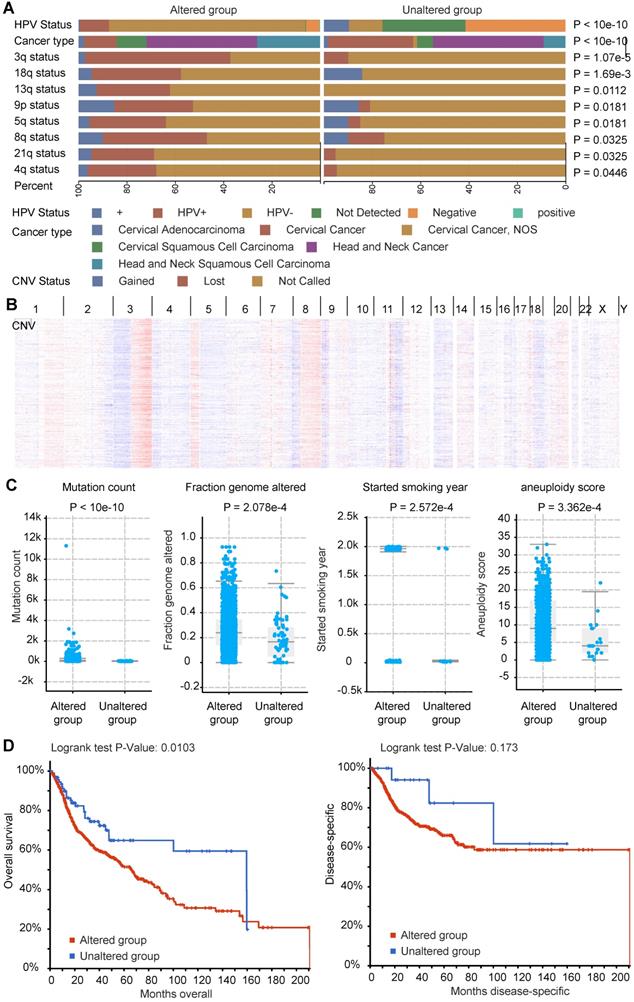 This work was supported by the Research Team of Female Reproductive Health and Fertility Preservation (SZSM201612065), the Research Team of Precise Diagnosis and Treatment for Gynecological Malignant Tumors (SZSM20182041). We would like to acknowledge the platform of TCGA, cBioPortal tool, GEPIA, and Metascape.

The datasets analyzed in this study can be found in the The Cancer Genome Atlas (https://portal.gdc.cancer.gov/) and cBioPortal (https://www.cbioportal.org/).