Background: Long noncoding RNA KCNQ1 opposite strand/antisense transcript 1 (lncRNA KCNQ1OT1) is abnormally expressed in various solid tumors. The purpose of this study was to explore the prognostic value and potential functional role of lncRNA KCNQ1OT1 across cancers.

The occurrence of carcinoma has steadily increased over the past few years, and cancer has become a global health problem. According to WHO estimates, the number of new cancer patients worldwide will reach more than 14 million by 2025 [1]. Surgery, radiotherapy, and chemotherapy are the main treatment options for tumors, but the prognosis of cancer patients at the advanced stage continues to be unfavorable, especially in some patients with lymph node metastasis [2, 3]. Therefore, exploring novel biomarkers and targets is crucial for advanced cancer therapy.

With a length of >200 nucleotides, lncRNAs are non-protein coding transcripts and can regulate gene expression. LncRNAs have been described as “transcriptional noise” and have received little attention in recent decades [4]. Increasing evidence reveals that lncRNAs participate in tumorigenesis and development. Thus, lncRNAs may become potential biomarkers and targets for tumor therapy [5]. However, only a few lncRNAs have been confirmed to have corresponding functional characteristics, and the functions of most lncRNAs have not been elucidated [6].

Our study aims to analyze the role of lncRNA KCNQ1OT1 in various participants with cancer. The following selection criteria were used: (a) articles that explored the association between lncRNA KCNQ1OT1 expression and cancer prognosis; (b) studies with participants divided into high and low lncRNA KCNQ1OT1 expression groups; (c) articles that described related clinicopathologic parameters such as age, sex, LNM, TNM stage, tumor size and distant metastasis (DM); and (d) studies that included sufficient data for the computation of odds ratios (ORs) and corresponding 95% confidence intervals (CIs). The exclusion criteria were as follows: (a) duplicate publications; (b) reviews, letters, case reports, and nonhuman subject research; and (c) articles without usable data and articles that were not published in English.

Data extraction was conducted by the authors (ZL and PL) according to the selection and exclusion criteria. Disagreements were resolved with the author (ZZ) in group discussions. Study characteristics, clinical outcomes and pathological characteristics were extracted from the remaining studies. If there was an article explaining the detailed HR and 95% survival CI, survival data were directly applied; if not, HR and 95% CI were extracted from Kaplan-Meier curves through Engauge Digitizer [20].

Gene Expression Profiling Interactive Analysis (GEPIA) is a newly developed interactive web server for the analysis of RNA sequencing expression data from tumors and normal samples from the Cancer Genome Atlas and Genotype Tissue Expression (GTEx) project [21]. To validate our results further, we utilized the GEPIA database based on the TCGA dataset to investigate lncRNA KCNQ1OT1 expression levels in various cancers. We obtained the expression information of lncRNA KCNQ1OT1 in carcinoma tissues and paracarcinoma tissues from the TIMER database and related prognosis statistics from the GEPIA database. LnCeVar [22], a comprehensive database of genomic variations, was applied to identify dysregulated ceRNA networks and conduct gene ontology and functional enrichment analyses.

Thirty matched CRC tissues and tumor-adjacent tissue were selected from CRC patients who did not receive chemotherapy or radiotherapy after surgery. The resected samples were immediately stored in a -80 °C liquid nitrogen freezer. In accordance with the Declaration of Helsinki, this study was approved by the Ethics Committee of the First Affiliated Hospital of Jinan University, and all patients signed an informed consent form.

CD8+ T cells were sorted and cocultured with HCT116 and SW620 cell lines in regular culture plates at different ratios. The cocultured cells were incubated for two days at 37 °C under 5% CO2 and harvested for the following experiments.

Cell and tissue lysates were centrifuged at 12000×g for 15 min to obtain the supernatants. The prepared sample was electrophoresed through SDS-PAGE electrophoresis gel after quantification and then transferred to a PVDF membrane via the sandwich method. The membranes were blocked with 5% BSA at room temperature and incubated with primary antibodies at 4 °C overnight, followed by HRP-conjugated secondary antibodies for 1 hour. Antibodies against CD155 and β-actin were purchased from Cell Signaling Technology (Beverly, MA, USA). Immunoreactive proteins were detected using an ECL Chemiluminescence Detection Kit.

The quality of the included articles was evaluated by the Newcastle-Ottawa Scale (NOS) [24]. Stata statistical software version 12.0 (Stata Corporation, College Station, TX, USA) and Review Manager version 5.3 (Cochrane Collaboration) were used to evaluate all statistical analyses. The heterogeneities of the selected literature were estimated by card-based q-tests and I2 statistics [25, 26]. Spearman correlation analysis and significance analysis were performed on the correlation of gene expression. GraphPad Prism 6.0 software (GraphPad Software, La Jolla, CA, USA) was used for data analysis. The data presented are the mean values of three independent experiments. Differences between two groups were evaluated through Student's t-test, whereas differences among multiple groups were calculated using ANOVA. A P-value<0.05 was considered statistically significant.

A flow diagram of the literature screening and selection processes was created for this study (Fig. S1). A total of 388 studies were identified, and 28 duplicate reports were eliminated. After excluding irrelevant research and nonhuman thematic research and further evaluation, a total of 1154 individuals were included in this research. The main characteristics and Newcastle-Ottawa Scale of eligible studies are presented in Table S1 and Table S2, respectively.

Association between lncRNA KCNQ1OT1 and the prognosis of cancer patients

We curated data from the LncTarD dataset to summarize the potential mechanism and function of lncRNA KCNQ1OT1 in various cancers (Table 2). We observed from the expression correlation heatmap that CTNNB1 was significantly associated with lncRNA KCNQ1OT1 across cancers (Fig. 2A). Integrated analysis showed that gene ontology was mainly involved in PDZ domain binding, protein dimerization activity, and DNA-dependent transcription, and functional pathways were mainly enriched in the biocarta plateletapp pathway and reactome signaling by BMP, and reactome pip3 activates AKT signaling and the biocarta ALK pathway (Fig. 2B-C). Further, we found that lncRNA KCNQ1OT1 participated in dysregulation hallmarks such as self-sufficient growth signals, insensitivity to antigrowth signals, sustained angiogenesis and tumor-promoting inflammation (Fig. 2D). Finally, the network analysis demonstrated a global perspective of potential ceRNA interactions disturbed by genomic variations (Fig. 2E).

Validation of the results in the TIMER and GEPIA databases 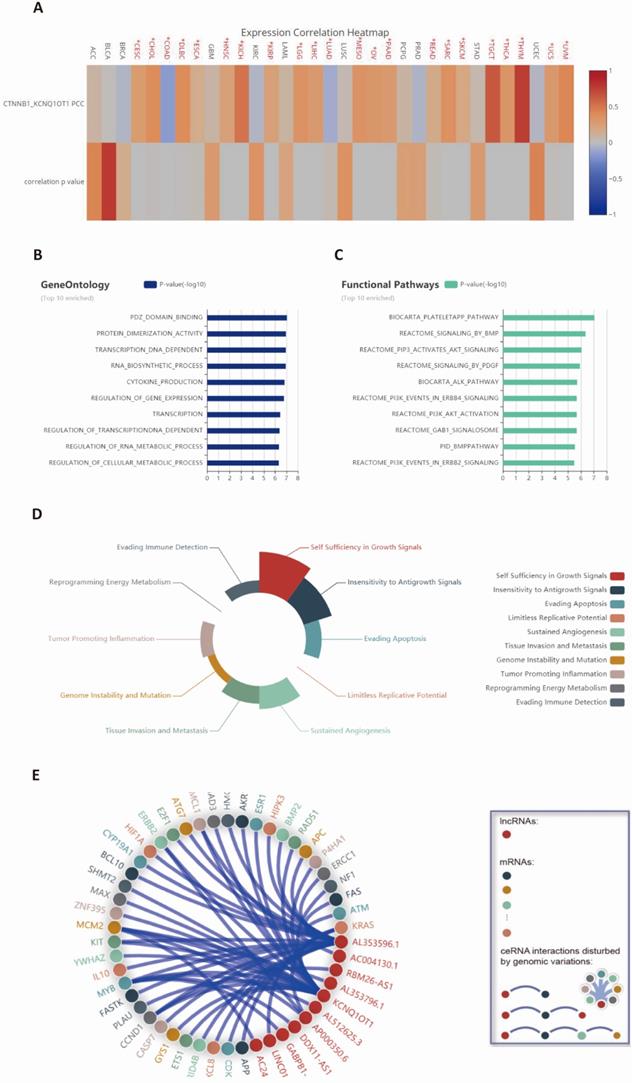 The related regulations of lncRNA KCNQ1OT1 in different cancer 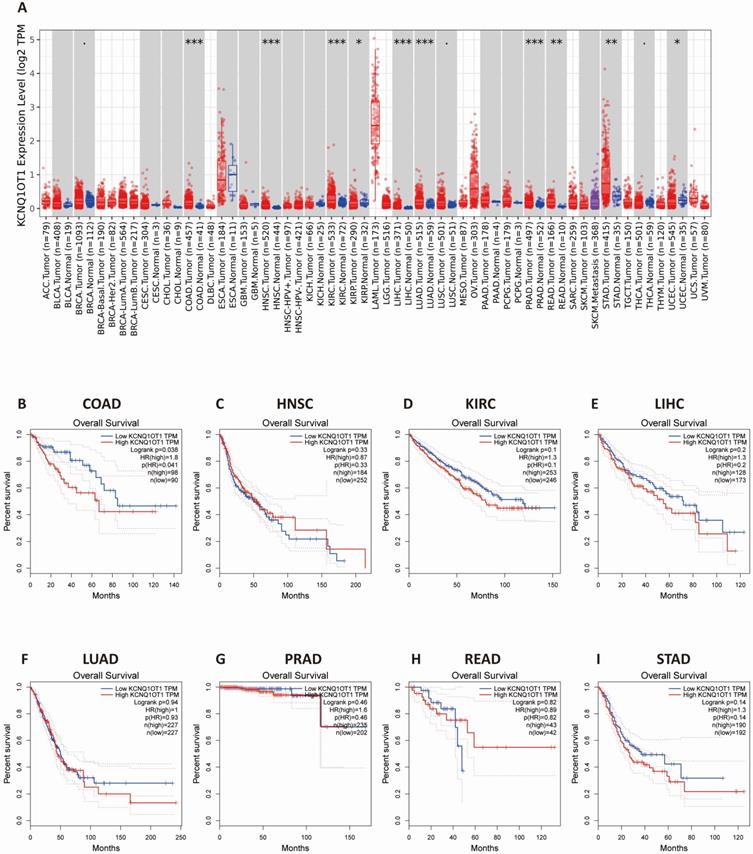 First, we performed this meta-analysis with eight studies to confirm the accuracy of previous research results. We found that upregulation of lncRNA KCNQ1OT1 expression was related to poor outcomes and advanced TNM stage in CRC with low heterogeneity. Although our sensitivity analysis revealed that the results only (Sun et al. 2017) impacted the outcomes, the overall heterogeneity was low in our included studies. These results are consistent with the findings of previous studies [12]. Indeed, there are several limitations to this study that should be pointed out. First, there were only 8 studies in this meta-analysis, and all the studies were from China. Estimating the HR and 95% CI from the Kaplan-Meier curve may affect the consistency of the results. Second, distinguishing the cutoff value of lncRNA KCNQ1OT1 expression groups may cause heterogeneity. In addition, we used the survival information retrieved by the GEPIA and TIMER databases to further validate our results. The results from the TIMER database showed that lncRNA KCNQ1OT1 was highly expressed in COAD, HNSC, KIRC, LIHC, LUAD, PRAD, READ and STAD compared with normal tissues. Nevertheless, high lncRNA KCNQ1OT1 expression was marginally associated with poorer prognosis only in COAD. The results of the TIMER and GEPIA databases are highly consistent with this meta-analysis.

The activation of T cells plays an important role in the antitumor immune response, which relies on activating the AKT/mTOR signaling pathway [33]. AKT improves the glucose uptake capacity of T cells by enhancing the expression of glucose transporter 1 [34], so AKT/mTOR signaling combines glucose metabolism of T cells with immune response signaling [35]. Previous studies have revealed that suspension of AKT and T cell metabolism in the tumor microenvironment can lead to weakening of the antitumor immune response [36, 37]. Bioinformatically (Fig. 2C-D), our functional annotation analysis revealed that lncRNA KCNQ1OT1 was enriched in PIP3 activating AKT signaling, while hallmark annotation analysis showed that lncRNA KCNQ1OT1 was significantly associated with tumor promoting inflammation, suggesting that lncRNA KCNQ1OT1 may inhibit T cell immune response by affecting T cell metabolism through the PIP3/AKT pathway. In addition, the upregulated expression of lncRNA KCNQ1OT1 positively correlated with the expression of CD155 in HCT116 and SW620 cell lines. CD155 (PVR/Necl5/Tage4) is a member of the nectin-like adhesion molecule family, which is highly upregulated on tumor cells of many cancer types and is associated with poor patient prognosis [27]. CD155 regulates the function of tumor infiltrating lymphocytes by interacting with stimulatory and inhibitory receptors such as TIGIT on T cells and NK cells [38, 39]. As a miRNA sponge, lncRNA KCNQ1OT1 can promote immune evasion by upregulating PD-L1 expression in prostate cancer and regulating immune escape in sorafenib-resistant hepatoma carcinoma cell cells [40,41]. Furthermore, we found that silencing of lncRNA KCNQ1OT1 downregulated the expression of CD155. Knockdown of lncRNA KCNQ1OT1 in CRC cells promoted IFN-γ production in CD8+ T cells, which indicated that the lncRNA KCNQ1OT1 mediates the CD8+ T cell response by regulating CD155 in CRC. 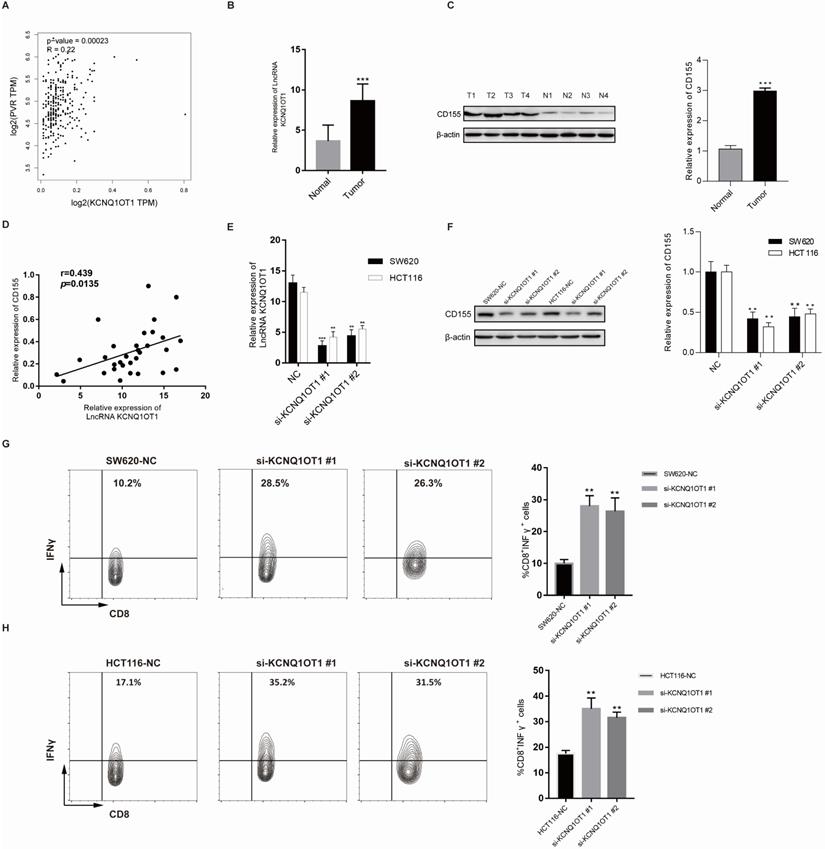 24. Higgins JP. Commentary: Heterogeneity in meta-analysis should be expected and appropriately quantified. International journal of epidemiology. 2008;37:1158-60

25. Mantel N, Haenszel W. Statistical aspects of the analysis of data from retrospective studies of disease. Journal of the National Cancer Institute. 1959;22:719-48